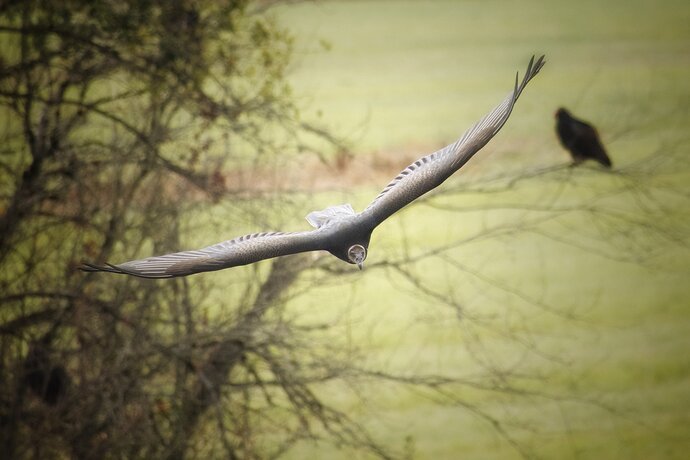 My juvenile Turkey Vulture series! I was able to watch a group of about 12 Turkey Vultures eating breakfast and this one juvenile was so funny to watch. His parents were trying to teach him about taking turns. And he kept flying around me and trying to figure me out! It was a beautiful experience!

I’m pretty impressed with your ability to find vultures. I like the wingspan and the position of the vulture but I must admit that the black out of focus bird on the right below the wingtip does really pull my eye.I don’t think it would be too difficult to get rid of it.

It’s a little crude, but I made the photobomber disappear! 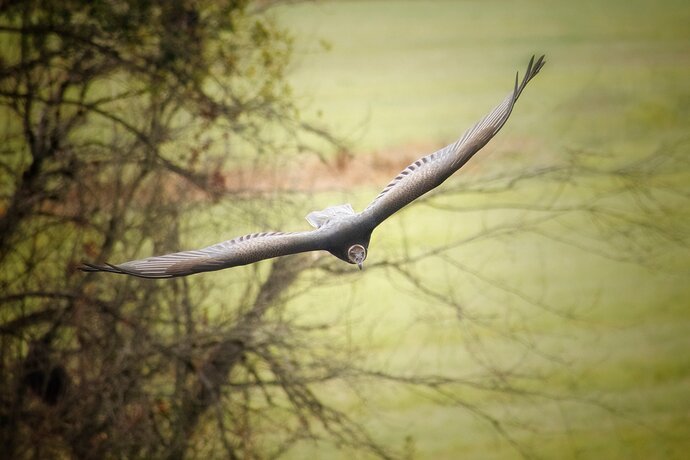 Thanks for looking and your suggestions @David_Schoen and @Kris_Smith but that’s why I listed it as an environmental shot. You probably didn’t notice but there’s also a vulture on the left hidden in the branches. I thought it looked neat that there were vultures behind him, that it was a whole group. I can see that maybe it draws the eye away from the main character but I thought it also might tell a story?..

For me the story is the flying bird. That it’s a juvenile and might not be good at it yet and vultures are so graceful that I don’t wonder some of it is learned not innate. So the OOF bird, as big and obvious as it is, doesn’t make me think about flight. Even more that it’s perched. And since you did a great job catching the bird in flight, I think you’d want to emphasize that, but YYMV and it’s your picture. Just thought I’d put it out there. I can spend more time on it finessing the stamping and cloning if you want.

Thanks @Kris_Smith , I can take out the perched vulture no problem, I literally have thousands of pictures of flying vultures so I guess I thought the picture as a whole was the story to go with #1 & #2 as it’s the same vulture. But I understand what you and at @David_Schoen mean as outside observers looking at it as just one frame. Thanks for your thoughts!

BTW, what does that mean?!

BTW, what does that mean?!

Your Mileage May Vary

Now I’m going to have to think about what THAT means! I’ve never heard that before @Kris_Smith !

It comes from car commercials on TV. They’d make some claim as to MPG and then dis-claim with YMMV in the fine print.

I really love the wing position and angle of this youngster, Vanessa. To me, the out of focus bird isn’t a drawback, but I tend to like more environmental images than a lot of people do.

Thanks @Dennis_Plank! Yeah I really like the environmental shots too. I think it tells a story and gives context. Glad you like it!