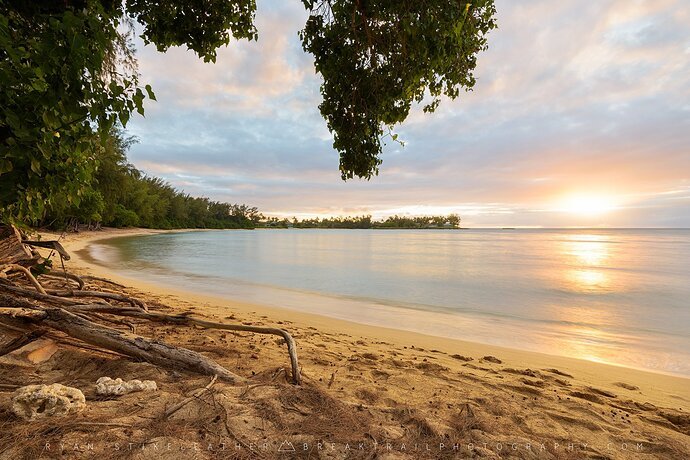 First time posting, and I’ll be honest…I’m very nervous about it. I know this is a safe place, but…

I live in Colorado, and don’t normally spend time at the beach. But a work trip sent me off to Hawaii, and I had to at least give it a try.

So, here we go…I’m looking for any and all feedback. Does the image say anything to you? I know it’s hard without being at the location, but initial impression is important too. How does the composition work?

This was photographed on Oahu, at Kawela Bay (on the North Shore). Even though it was only producing rain on Oahu, Hurricane Hector was pushing its was toward the Big Island. I was hoping to get more drama in the sky, but it ended up being more calm and subtle.

This was a focus stack of three images on the foreground rocks and roots, the bay, and then the distant land in the background. I also did blend a brighter exposure of the foreground to match closer to the sky. I also cloned out two guys fishing on the beach.

My ultimate goal is to have my images look as natural as possible, and not overly post-processed.

And I was on a Sirui tripod

No need to be nervous Ryan, we’re all friends here!

I love the processing, it is not overdone and very pleasing to the eye. I like how you kept a subtle scene as subtle, it’s easy to go overboard and make it too contrasty. Nice and sharp all around, colors look good.

The one thing that really bothers my eye is the branch hanging down right in the middle of the scene. It holds a lot of visual mass and frames the sky to the left of the sun. I would recommend trying to crop out some of the top to take away some of that mass, and/or dodge the dark leaves so the eye is not drawn there so much.

Thanks David. I feel much better now that I’ve got one photograph post under my belt.

Sometimes I have a love/hate relationship with post-processing. I want the image to look as natural as possible, but I also want it to pop. It’s a delicate dance for me.

I agree with you about the low-hanging branch. I would have liked to have it closer to the right side, and not right in the middle, but it just wouldn’t move

I’ll give your editing suggestions a shot and see if that gives the scene more balance.

I agree, the processing looks really natural here! I might give the clouds around the sun a tiny bit more contrast and saturation for a pop in that highlight. I actually like the idea of the branch in the image as it sells that view from the forest look, but I’d like to see a little more of it to connect the foliage if possible.

Thanks Jason! I wasn’t sure how far to take the highlight areas. Sometimes, when I expose for the highlights, and then try to blend it into the scene, it looks unnatural. And then sometimes I don’t take it far enough…so much to consider.

The beach at Kawela Bay isn’t very wide, and the trees spread almost to the edge. So I knew I had to include them to really capture the “tucked away” appearance. Maybe someday I’ll get to go back and try a different composition.

I really appreciate the feedback

Good image, Ryan. It feels real and natural despite your revelations. I like the natural framing although it feels like that central bough is too centered and massive thereby competing for attention from the rest of the frame. Would composing from underneath that bough have maintained your same natural framing and general composition? Nice work, welcome to NPN!

Thanks Michael. You’re absolutely right about the low hanging branch. I wanted it to feel like you were stepping out of the forest, and onto the beach…but I didn’t have enough tree/leaves on the right side.

I “worked” the scene for awhile, and probably just gave up to soon and focused too much on the foreground interest. There were more people and footprints further down the beach, and so I settled for this composition. I’m sure if I every get back to this beach, I’ll give it another shot…pun intended.

Thanks for the welcome! It’s good to be a part of NPN

Ryan, really nice first post at NPN. The processing here is very natural looking, and has a nice warm feeling to it, so mission accomplished there. The composition with the tree does achieve a sense of depth that you wouldn’t gotten with just the beach and sky. I look at the framing similar to Jason, in that I’d like to see the center branch connected to the rest of the tree. IMO, by having it suspended straight from the frame edge, it places too much importance on the branch and makes it a primary element of the composition. My preference would be to show more of the tree, which would then make it more of a framing element that is complementary to the stars of this shot, the beach and sky.

Another spot-on critique! Thanks for the feedback, Ed.

Welcome and an excellent first post. A little late to the party, but wanted to provide some feedback that you’re looking for.

Like the other comments, I think your processing is wonderful and I have no suggestions there.

Compositionally, the sweeping curve of the beach line, extending all the way to the point and leading to the sun make for a very strong comp. Great job with that. As already noted, the main cluster of leaves is a bit bulky and detracts somewhat. Initially I was thinking a crop from the top might help, but then it would create a new issue with the smaller cluster of leaves… so never mind.

What really peaks my interest is the driftwood and clutter on the beach. I’m actually wishing to see a bit more; sounds like that was an interest of yours in the composition as well.

Thanks Lon. I appreciate you taking the time to give me your thoughts…late to the game or not

Great suggestions, and I’m glad I succeeded on most of the composition. All the tips really help me be more aware of the pieces and parts that will help or hinder the final photograph. Now I just need to get back out there and put it to the test.