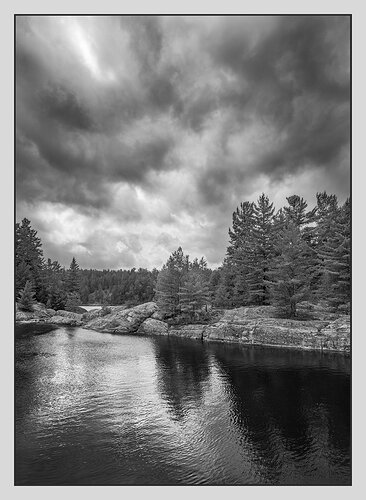 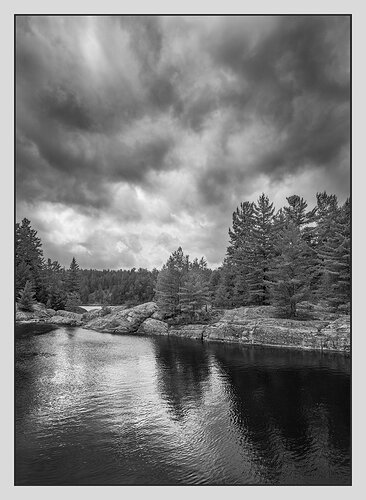 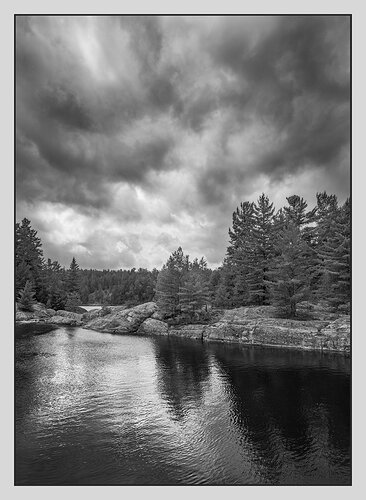 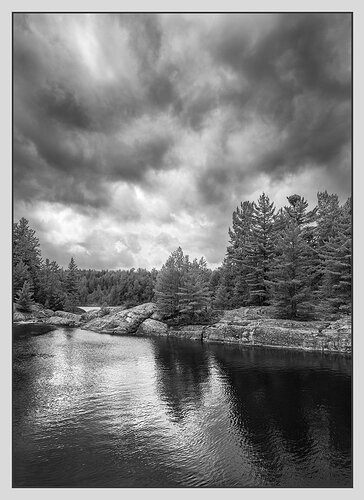 While on our month-long canoe adventure in Temagami (Ontario) this past summer, I heard about Lady Evelyn Falls. I don’t know about you, but the name brings to mind a Victorian explorer coming upon a hidden cascade –the awe-full power of surging water falling from a great height to a silent pool below (think of the movie, “The Mission”). And so, we paddled for almost three weeks and arrived at Lady Evelyn Falls. You can see the falls in this picture over on the far left of the frame about a third of the way up from the bottom. The cascade, it turns out, plummets, and here I’m being generous, six inches from top to bottom. A little underwhelming! That being said this spot was remarkable and well worth the time and effort spent getting there. In essence it is a lagoon enclosed by beautifully sculpted rock faces. This image was shot looking down from our campsite which rose off the water about 15 feet. The lagoon travels around to the right and circles behind our campsite. We entered from that direction into the lagoon through an opening in the rock that was about 15 feet wide – like sentries on either side. We were very lucky, since by the time we arrived, near the end of August there wasn’t a soul around. We also encountered the most exciting weather. On the day I took this picture we had three distinct fronts roll in. After I took this picture the sky completely cleared – blue and sunshine – but about an hour after that another front of equal intensity rolled in. That happened three times. At around sunset the real storm hit, and it was a beauty. There is nothing quite so exciting as sitting through a massive thunder and lightning storm when you’re all set and prepared. What a thrill. I hope this picture gives you all a sense of that impending primordial energy.

Sounds like an amazing adventure, Kerry. The black/white treatment sets off the changing weather very nicely. Love the contrast between the threating clouds and the still water. Great trip and beautiful image. Thanks for sharing your adventure with us.

Quite beautiful if imposing cloud deck. Nice drama without looking forced. I love the story of the ‘falls’. Glad there was plenty of other beauty and wonder to make up for it. As a kayaker I can appreciate the peek into the next body of water. Whenever I paddle rivers it’s that next bend that keeps me going. Or with dam-created lakes there are always plenty of crinkly bits to explore. My favorite thing to do on the water.

I’m a big fan of chasing interesting weather in landscape photography, and this image certainly tells an interesting story about impending changes in the weather. The look of both the water and the clouds are saying changes are on the way. B&W images often benefit from having dramatic clouds (which you have here), but for me the texture, ripples and shadows in the water are more interesting than the clouds themselves. The water has such a dynamic look, and you have processed it beautifully.

My only suggested tweak is subjective, and a very minor nitpick. The very bright strip in the ULC grabs a lot of attention. I would consider dialing down it’s brightness, or maybe even cloning it away.

@linda_mellor - appreciate the feedback. It was, indeed, a great trip.
@Kris_Smith - Well, Lady Evelyn Falls once was imposing, I’m told. Prior to damming (and damning) Lady Evelyn Lake back in 1926 (power for silver mining) the lake was 15 or 20 feet lower and the falls really were falls. The rock faces surrounding the present lagoon must have been amazing!
@Ed_McGuirk - appreciate the feedback as always Ed. When I dowloaded this picture, it was the water that grabbed me even though I had taken the picture mostly for the sky. I had thought about bringing that streak of light down but got very attached to it. But after your comment, I gave it a go and I think you’re right. Nothing is lost, really, and the reader probably doesn’t head off out of the picture. What do you think? (scroll up)

It’s a shame about the former falls, but you got a very nice image for the trip. I do like the revision removing the bright area. I love the sky, but for me the trees are just a bit tonally flat. Maybe layer two conversions and mask?

@Diane_Miller - I did have trouble in post with those mid tone trees. I’m not sure what the problem is. I brought them in from Lr with a pretty balanced histogram - nothing clipped or blown. So, whatever detail there is, is in there. I tried to pull out the detail with contrast and dodging and burning but maybe I went too far and that’s what flattened things out. Or it might be the backlighting that tends to silhouette. I do have a brighter exposure of the same image that I could blend but I’m not sure it would make a difference. Here’s another version (scroll up) where I pulled back some of the contrast and brightness. Does that help?

The trees look a little flatter in the 3rd version. I wonder about trying a different B/W conversion that brightens the greens/yellows and layer it on and mask subtly to the tree area? There are some very nice tonalities in the branch shapes in the trees and they are being a bit swamped by the gorgeous clouds and water. Maybe I’m being greedy, though…

@Diane_Miller - I appreciate your pointing this out to me. You reminded me of something that I already know but due to being in a rush or laziness, I forgot. Normally, when I do a B&W conversion I include a step (conveniently available in the TK7/8 panel) where I work the colour sliders before the conversion. In this photograph I didn’t do it, but you picked up on it right away. So, I did what you suggested, pulled up the greens and yellows a bit in a second image and blended. I thought that doing this after the fact would be a big deal, but it wasn’t. Is this what you had in mind? I do think the forest area has more depth and makes this version “livelier” than the original - scroll up to, I promise, the last one).

Your comments are usually just as interesting as the image itself. You really take the viewer to the image. One thing that struck me about this image from the start is that the sky looks threatening and foreboding but the water and trees give a very pleasant atmosphere. I would darken the water and trees to match the mood of that sky. 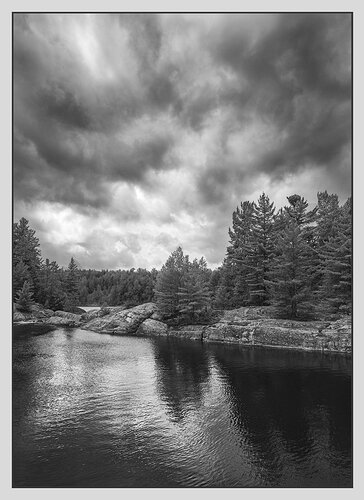 @Igor_Doncov - Good call. I did one more revision, which I haven’t posted because it is more or less exactly like your rework. This image went through quite a metamorphosis thanks to the input from some well trained, unbiased eyes. Much thanks, indeed. I learned a lot. That is why I love posting on this site!