Little House on the Hill 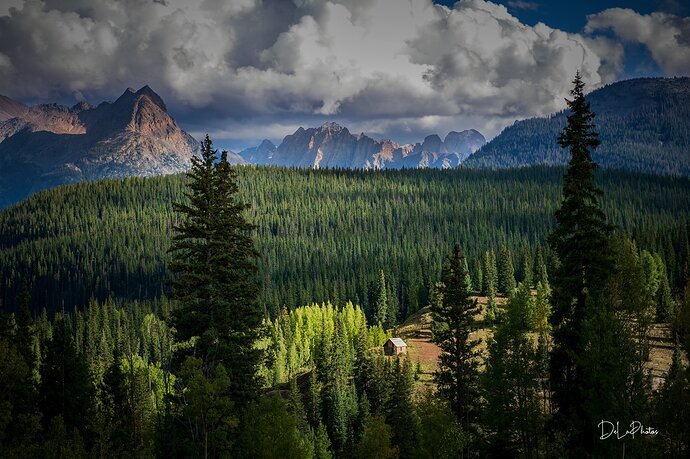 Taken on my first ever workshop, while in Colorado for my first time, I saw this little shack while on the road to our shoot location. The sun was hitting it just right and I loved the layers I saw from the clouds to the mountains to the trees.

Any critique/advice would be appreciated. 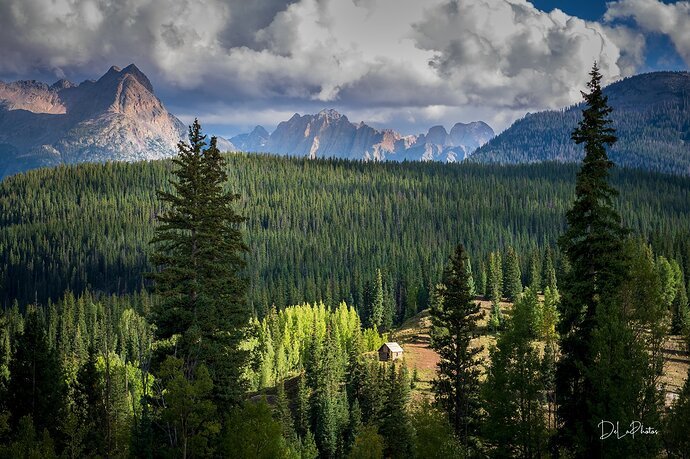 ColoradoWkshop_09_22_1192048×1365 807 KB
I finally got around to sitting down and taking all of the suggestions into account and working on this image a bit. Keeping in mind that I consider myself a novice in post procession, I really do like the way this turned out. Thank you for all of the comments. Let me know what you think?
1 Like
John_Pedersen (John Pedersen) September 28, 2022, 11:58pm #2

Great shot!!! The scenery is amazing and the light on the house is such a beautiful thing! I really like the image and it could stand on it’s own as-is.

There are a couple of things that caught my eye as I viewed it large. Just some food for thought for you. The background mountains, with the haze, seem a bit disconnected from the fore and mid ground where there is no haze. I’m wondering if some slight contrast adjustments (or Dehaze) on the background mountains may help them integrate a bit smoother with the rest of the image. The second thing that caught my attention are the two trees in the foreground. Neat idea to use them to “frame” the house. Of course there is no way you can get rid of them, however, they are fairly large in the scene and dark. Being dark and large gives visual weight/importance to them, which, because they are in the immediate foreground, could cause them to act as a bit of a “fence” for people to move through them to the scene beyond. I’m wondering if you lightened them up a bit, take some weight away from them, they wouldn’t dominate as much. You want them to be a gateway to heading out and exploring the rest of the image.

I like this scene David. Love the placement of the house and how it gives scale to the overall surroundings.
I do agree with the comment about the trees having a lot of visual weight. I am not sure how you can go around that.
As for the haze in the background i actually think it is good because it adds depth. Usually things closer to you appear sharper and have more contrast than things farther away. I think however that the transition from the far hazy mountains to the mid-ground trees is harsh. I wonder if you added contrast to the trees?! If yes maybe fade that haze into the mid-ground to keep it connected.
I also think a slight burn in the mid ground trees will give more focus to the house which i assume is the subject of the photo.

Great image, David! Your capturing of the light as well as the sky adds a lot to the quality of the image. In general I have no problem with haze in front of distant objects, that adds depth to the image. However, as pointed out by Aref the transition in your image is very sharp. I agree with the previous comments on the two large trees in the foreground.

David, the lighting on the small, isolated cabin is great. The sense of quiet isolation is well captured (and very inviting). Since the forest goes to the top of the nearest ridge, the shift to haze looks completely natural (there’s clearly a wide valley behind). One thing you could do to reduce it’s impact is to do a local blue desaturation on the distant mountains. The two big foreground trees have potential to be fine framing elements, but that would mean that you needed to have the time and space to walk around, adjusting their relative placement in the frame.

David, I really like the small cabin and the lighting on it in the foreground. My eye goes right towards that area of the frame, and the visual contrast between the small cabin and the large trees, mountains and clouds in the background is great. The large dark trees framing it don’t bother my eye that much. What does bother me, though, is how dark the mountains and clouds are in the background, especially on the edges of the frame. Also, the center cloud looks to have blown out highlights. The background looks very unnatural to me. I would suggest lightening up the darker areas just a touch, and decreasing the highlights and/or whites to recover some detail in the lightest areas, if possible.

What a beautiful scene you happened on here, David. The beautifully lit area down by the shack is wonderful. You have real mood in the sky and dappled light spread across the valley floor. There are a couple of things that grab my attention right away. The sky looks like the lights have been crushed. By that, I mean that it looks like they were maybe overexposed and brought way down in post processing. This is most noticeable in the large cloud formation directly above the center mountain peaks. That section has gone gray. There are some hard edges as well just above where the tall tree on the right pokes into the sky where the edges of those clouds appear to have been blown out and recovered in post. I hope you don’t mind but I brought this into Light Room for a quick look and there was nothing even close to the right side of the histogram. You had a full stop of light to work with so I went about trying to add back in some more light to the sky. I also tried to bring the blacks back in the foreground trees but with a Jpeg, I was only able to do so much. Maybe the raw holds more data that can be recovered. This was clearly a very high dynamic range kind of scene that might have benefited from multiple exposures. I also added a little bit of negative dehaze and reduced texture to make it look a little more hazy where the trees meet the mountains. I really love the scene and with the raw file you have enough detail to rework some of these issues as I think it’s worth another try. 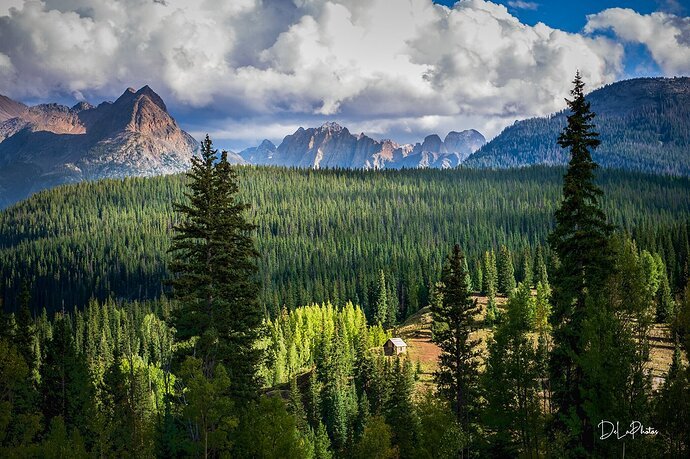 I agree with everything @David_Haynes said above, including what a beautiful scene you captured and that reworking the image is worth the effort! One more thing: the entire frame appears to be tilted a little downwards to the left, about 1.3 degrees. This is evident at looking at the tiny cabin and the large trees in the front. I did a quick rotate in ACR on the original image you posted to illustrate. 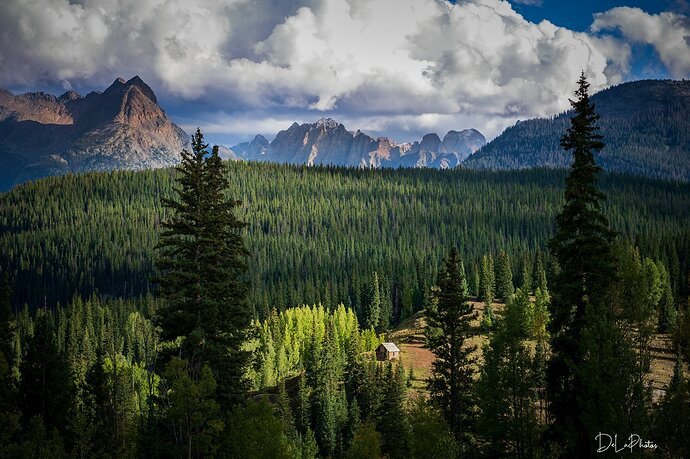 Hey David, this is a wonderful scene. Nice capture. You’ve gotten a lot of good suggestions and @David_Haynes and @Patrick_Campbell both had some great ones recently. If you’re of a mind, you can do some revisions and add it to your original post. Just click on the pencil and edit it. I would recommend putting the revision at the top, so that it becomes the thumbnail for the post.

Hello everyone. Thank you so much to everyone that replied and provided suggestions. This is precisely why I enjoy this site so much. I apologize for the delayed response but my full time job is in law enforcement in South Florida and I’ve been busy the past few days dealing with the response to the west coast of Florida in response to Hurricane Ian. When time permits I’ll go back and make some edits. Thanks again!

@Delaphotos Stay safe! Our thoughts are with you as your state recovers from Hurricane Ian.

What a grand Rocky Mountain landscape! That little cabin completes the image and story for me. Without it, still a grand mountain landscape - but with it, now there’s a story to tell. I think perhaps without the two dominating pines up front I might even classify as epic!

Great suggestions from the others. I think a few little tweaks and you can really elevate this image. Definitely a keeper and print worthy! thanks for sharing!

Yes, stay safe and than you for your service!

…est ridge, the shift to haze looks completely natural (there’s clearly a wide valley behind). One thing you could do to reduce it’s impact is to do a local blue desaturation on the distant mountains. The two big foreground trees have potential to be fine framing elements, but that would mean that you needed to have the time and space to walk around, adjusting their relative placement in the frame.

Hi Mark…in terms of the composition, unfortunately, I was in a Jeep heading up the mountain and all they did was stop for a second for me when I saw the light on the cabin. I would have loved to spend more time composing the shot but it was not possible. Thanks for the feedback!