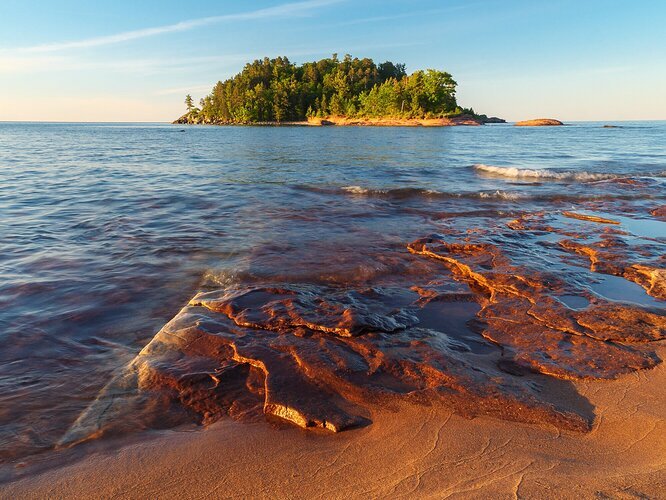 There aren’t many ways to shoot Little Presque. If you’re brave you can walk over to it - the water is only about 4 feet deep, but many have died here because of the rip currents that come though without warning. I didn’t do that. Instead I got down low with the tripod for the color and texture in the rocks while waiting for the sun to go down. Not a bad way to spend the time. The wide stripe on the left is part of the rock - basically all of it is igneous since the lake was originally formed by volcanic activity. People think Superior is about the water…it isn’t…it’s about the rock.

What about that wavelet? Too bright? Not bright enough?

I am new here on NPN and just wanted to say this is a great shot showcasing the island and the geology! What stands out to me are the rocks in the foreground. Even though I have never been to the great lake I agree that it’s about the rocks with many landscape photography opportunities. That being said, I think the wavelet is a tad distracting. How were the waves during this time? Were they pretty consistent or was there times when the water was fairly calm (like it is in the left side of the image)? I think a simple composition of the rocks, calm water, and the island would make for a perfect photo. Again, I love the rocks in the foreground. The bright igneous on the left and the more curvy rocks on the right make excellent leading lines.

Kristin, I really like the composition especially wide low perspective. Light and rock colors are splendid. Like @Benjamin47n I also think the lower waves are a bit distracting. I think you have two shots here…this one and just the lower 1/2.

Kris, the afternoon light on those foreground rocks and sand is beautiful. I really like the fine lines in the sand as well. The centered location of the island works well because its shape is so symmetrical.

Because the thing that has the most interest for me is the rocks, the water to the left of the rocks unbalances the composition for me. Do you have something where you’re more to the right and the whole foreground is rocks and sand?

Your perspective, low, with the rocks generating an inverted “V” and pointing to the isolated island is intriguing. The whole points the viewer to the objects and tells them to go for it!

That little wave is distracting, but hey, nature is messy. She doesn’t cater to our needs, but in this case is listening to the winds and currents. I guess you could wait for the a moment when there isn’t a crest.

You already took care of my one big nit pik but getting the horizon absolutely horizontal! Our friends here on NPN do the same, but I see so many instances where tilted horizons are common that it’s refreshing to see them done right!

Aside from the name Presque Isle, the geology of this location with the red rock, and islands reminds very much of the coast of Maine. And also similarly, I agree that Superior, like the Maine coast, is more about the rocks than it is the water.

Now to the image, the composition works well, and does a great job showcasing the colors and texture of these wonderful rocks, and your position of them creates some nice diagonal lines. And I like where you placed the horizon, given your blue bird sky. The wavelet is not a big deal to me, although I think you could burn down it’s highlights a slight bit. So overall this image works very well for me, well done Kris.

Thanks Ed…I almost darkened that wavelet, but didn’t and posted here to get a general consensus. I don’t have a shot without the little waves because they are constant and I didn’t like my very long exposures because it obscures the rock too much.

Too right about the coasts being about the rock. Superior is amazing and I’m really pleased with the handful of images I got on this trip that showcase all the mutations you can find there. It’s not quite my backyard, but it’s close. 3 1/2 hours puts me at Lake Superior or Michigan.