Another from my backyard pond. This time a Great Egret spent some time looking for a meal in the late afternoon. This was a lesson in using manual mode with auto ISO. This is my new favorite shooting mode for wildlife and birds. I wanted to keep the shutter speed up in case he flew but I also wanted to give it some DOF to include the environment. Camera was set at 1/2000 sec F/14. This pushed the auto ISO to 6400, the max I have set for the D850. 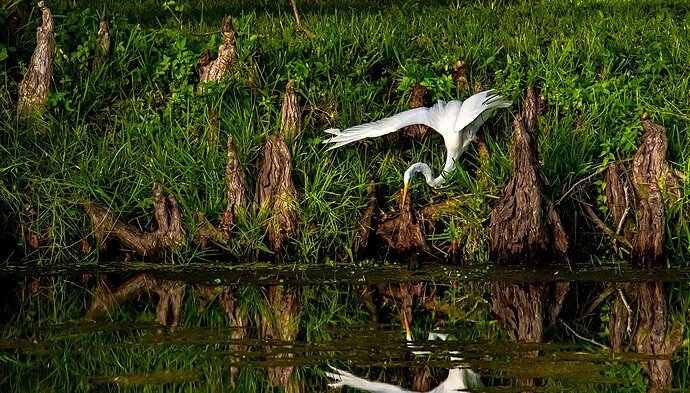 What technical feedback would you like if any? Do you think the manual mode works sacrificing high ISO for greater DOF?

What artistic feedback would you like if any?Do you thing the greater DOF makes the background too busy?

Hi Kelly
First thing way F14? How big is the lens 400mm,500mm,600mm? F8 should give you good DOF. The whites on the Egret are a bit hot, there should be a way to shot with a -lens correction setting on camera. All an all this is a good exercise in noise reduction at 6400 ISO.
Now for the photograph, crop a little of the left and open up the lower frame, to pick up more of the Egret’s reflection. You could also crop the lower frame (just past the wing) to give you a head to head
reflection. I do like the photograph. Nice work.
Peter

Hi Kelly. I don’t mind the iso 6400. The noise looks quite reasonable. I agree with Peter that the whites look a bit hot. I know Florida colors can be very vibrant, but this seems just a bit much. I think I’d back off the highlights and saturation/contrast a bit. I also agree with Peter that the bottom of the frame falls in a slightly awkward position with respect to the reflection of the egret, though I do like the placement of the egret in the frame, which limits your options. You might be able to cheat a bit and clone over the reflected wing -I don’t think most viewers would notice it’s absence.

As for the f/14. as Peter said, your focal length is necessary to know whether that makes sense or not. Normally, this large a scene should have pretty decent depth of field, but since it’s your back yard, I’d experiment with different apertures to see where the sweet spot is as a compromise between shutter speed/iso and depth of field. You might also set up with a couple of different presets in your camera-one for relatively stationary wildlife and one for action that you can switch between rapidly. In this case, 1/2000 shutter speed is overkill unless you were trying to stop the action when the egret strikes.

This is an interesting composition. I like the environmental feel and the egret’s outstretched wing. Those are some huge Cypress knees. That said, the bird feels a bit small in the frame, and the reflection doesn’t add anything for me. So, I’d crop up from the bottom and in from the right and left to better emphasize the egret, while keeping the comp. pretty loose. I have to agree with Peter. F/14 is almost certainly overkill, especially if it results in shooting at ISO 6400 on the D850. You’re pretty far outside that camera’s bailiwick at that ISO. Also, you should look at a depth of field calculator. Going to f/14 probably didn’t even result in that much additional DoF, depending on your focal length. Last, I agree with Dennis regarding the colors. Looks like they’re a little oversaturated.

Thanks guys for your response. The lens is a Tamron 150-600 at 600 mm wide open is 6.3. As for the exposure I had to add 1.45 stops in Lightroom. Lowering the exposure on the egret itself tends to go gray on top of the feathers while leaving the back slightly hot still. Camera was set to a -1 EV compensation. 5:30pm in direct sun. For the crop lets call it a miss in frame. The image is cropped from the top only. My fault I tried hand holding the lens (bad idea but I have know how long he will stay before heading to the pond next door.) The frame before he was just walking along the edge and the frame after his neck is extended to the water. This was with my D850 at 5 frames per second normally I would have the D5 at 11fps on a tripod with gimbal head. Not exactly sure how I ended up at f/14 but like I said it was a lesson using manual mode with auto ISO. 6400 is set as my upper limit. I"ll try to see what a tighter crop will look like. Colors are pretty much what I see though the viewfinder so I think I will leave that alone. He did fly a little later but I only got one tight shot. I’ll pass that on shortly. 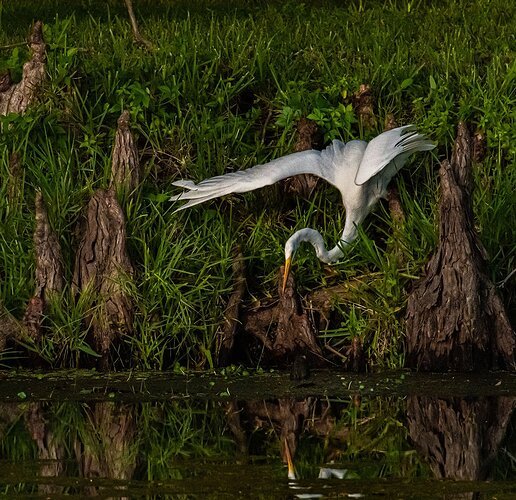 That file will never be able to retain quality at that drastic a crop. I’ was thinking something like this: