What technical feedback would you like if any? I’m an enthusiastic novice, anxious for any and all tips. The more detailed the better (I speak Lightroom, a little Photoshop).

What artistic feedback would you like if any? Bring it on! 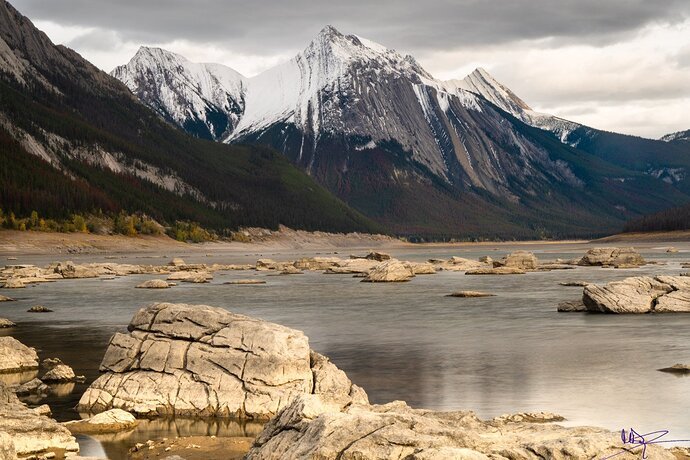 This seems like a pleasant scene. Nice mountain in the background with a river and rocks. My biggest issue is light. The large rocks in the foreground gather a lot of attention because they are bright and because of their position. As captured, the lighting is pretty flat. I know we can’t always find the great spots with great light, but the reality is, without nice light, the image will suffer.

Technically: Why f/22? If you were to look at the details of this image compared to an image captured at say f/13, you’d find this is softer because you’re well into diffraction limitation of the lens. If you’re going after maximum depth use the hyperlocal distance for the lens at a more reasonable aperture for maximum depth and quality.

This looks like an amazing area! I definitely agree with Keith here, the foreground rock takes up too much attention due to its size, placement, and light.

In the field, I like to have an internal dialog of sorts, discussing each element in the scene. First, I pick what is most interesting to me; the whole point of the image. From what I can see in your photo, it would be probably be the huge awesome mountain. Next, I take a look at each other element and think about how it adds to or detracts from the most interesting thing:

So there’s a 20/20 hindsight example thought process I might have in this area. I think the best photos with the most cohesive compositions ensure that each element in the scene has a thought out purpose. Hope that helps.

Matt, I think the combination of foreground rocks and snowy, very steep peak have lots of possibilities. You’ve already got a number of good suggestions. I’d add that the current composition is a bit left heavy with the two main elements, the foreground boulder and the big mountain both at or to the left of center. Moving around (in this case a few steps to your right), would let you rotate the camera so that the main peak is right of center while the boulder is even further left. With overcast light, colors really pop, which in this case means that I’d keep an eye on the reflections to see if they can be emphasized in way that adds to your two main elements. Overcast is also good for detailed textures and you’ve got those showing very nicely in the big boulder.

Great suggestions already. This scene has a great possibilities. My first reaction was the light, it is a bit flat as mentioned. I don’t know if it was possible to move more to the right so you could get more reflection in the water and less rock in the foreground, but I carry a 3 stop and a 7 stop ND filter and when the water is moving like this them I can slow down the shutter speed and smooth out the water. This will give you more of the reflection.