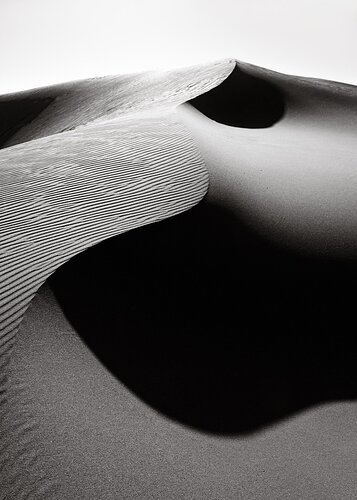 Minimalist or not? It’s certainly stark, but I don’t know about all that texture. I often feel that something isn’t minimalist if there is any amount of texture. I’m not worried about the classification of this - just thought I’d throw that out for discussion, if anyone wants to bite. There are certainly tons of opinions on what is minimalism. I was in a minimalist group on FB for a (short) while, and the discussion there of what “qualified” as minimalism were brutal.

Any comments welcome. In my original version of this, the sky wasn’t so bright. Based on feedback from our local critique group, though, I tried it with a brighter sky and more contrast (this version).

Bonnie: This works for me. Marvelous lines and a good contrast range. Well seen and presented. >=))>

For me, minimalism has something to do with reducing an image to its essential component parts - to its essence. That often includes an element of abstraction. To my mind, your image completely fits the bill. And it is a real beauty. Such gorgeous and sensuous lines combined with exquisite texture, light and dark.

I think it’s difficult to go wrong here with the subject matter. You have wonderful curves, great diagonal textures, stark contrast, in a well composed presentation. Dunes are never the same though they may have similar geologic features. The day before and the day after were probably different. I sure like this.

I am thoroughly enjoying this one, Bonnie. Great lines and textures and beautifully processed. Minimalist? Not really to my eye, but that does not detract from the image, that is for sure.

Minimalist photography is a form of photography that is distinguished by extreme, austere simplicity It emphasizes spareness and focuses solely on the smallest number of objects in the composition process."

The problem is how austere or spare does it have to be before it falls into this category. I think yours is borderline.

As far as the image goes - it is uniquely different. The three black shapes surrounded by texture is unusual. It’s not really sensuous. It’s more like suggestive forms of a psychological point of view. I guess Lon would call it a mind bender, even though it’s clear what it is.

Igor, I like that definition, and that is how I see minimalism. And, Harley, I agree that my photo here is “borderline” minimalism.

I like this image a lot, Bonnie. Whether it’s minimalism or not, I’ll leave up to people who care about such distinctions.