Moonset over the Valley +RP 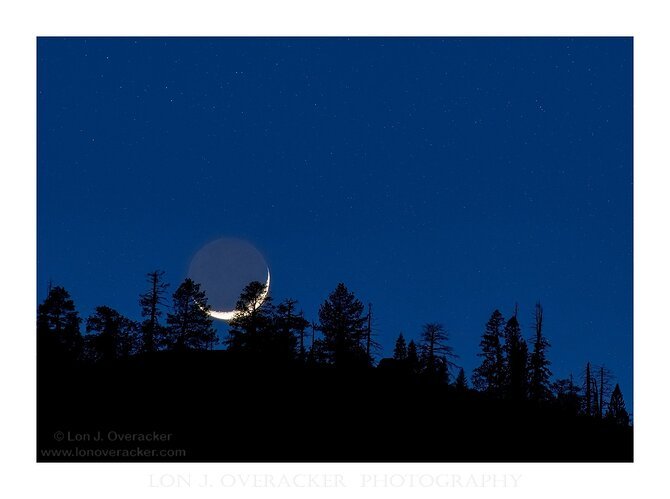 Edit: Reworked based on feedback: 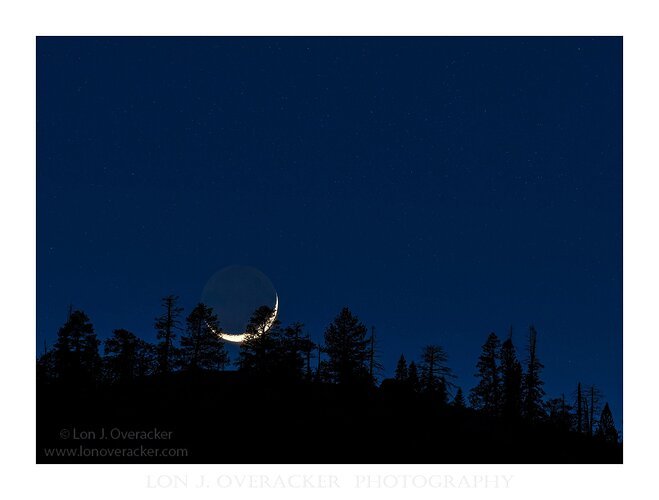 I think this is the last image I’ll show from my trip to Yosemite Valley in early May. Not so ironically, I’ve spent the most time on this one too.

After learning our attempt at photographing the Milky Way over Half Dome from Glacier Pt. was a bust, we hung out in the valley and decided on stars over Yosemite Falls. Well, just as we pulled up to the parking area, we caught the crescent moon setting over the valley walls. Had to act quickly as it was about to disappear! I managed only about 10 frames as I was backing up a few yards after every click - until I ran out of room.

Full disclosure! As this is a composite. The setting moon and trees was combined with some stars that were captured about 45min later and 90degs to the right. One of the challenges/games to play is deciding on the balance of brightness of the stars, relative to the real time of day/evening of the setting moon. Given the chosen brightness of the blue - stars might not be so visible? I’m going to have to pay more attention next time. So I’m curious if the balance struck looks believable, reasonable.

Also, unsure about the color/luminosity of the shaded moon; struggeled with that.

One of the main reasons I did want to share was how impressed I was with the detail that was managed in both the original capture, and resulting processing. Very happy with the sharpness and detail at 300mm from at least a mile away with my trusted <$1k lens… Then add in the newly purchased Topaz DeNoise, and I’m pretty happy with the details. The overall impression of the image is yet to be determined…

All comments and feedback welcome. I especially interested in your impression of the believability in this composite? Too much stars, sky too blue/bright?

Well, you can chalk up a +10 for my impression!! The sky is not too blue for my tastes – cameras capture colors in dim light like twilight skies that our eyes can’t capture – a rods and cones thing, where we don’t see the color in dim light that the camera can capture. I say more power to the sensor!!

I thought you were going to say it was a focus stack. Truly excellent sharpness on both moon and trees! And wonderful earthshine in the bargain!! I like the sense here of, wow – just got it in the nick of time! And I love trees on ridgelines like this! I don’t think the stars are overdone at all, and could be even brighter for my taste. Maybe another sensor vs. vision thing…

My only thought is if the brightest part of the moon could be pulled down a little, but not a big deal.

Love this composite! Per your feedback request, I do think the sky might be slightly too bright. It wasn’t necessarily because of the stars, but it was the shadow on the moon specifically that looked just slightly too bright because if I look at the moon, it takes me a minute to find that shadow area with my naked eye.

Outstanding phot of the crescent. I love how it’s behind the trees. The sharpness of both the moon and trees, even in the lit portion where the trees silhouette against the moon looks great with no blooming. I honestly think the stars are not even needed. The cool blue sky and earthshine and sunshine lit moon with the silhouetted trees provide more than enough visual interest.

Youssef - it takes a lot to impress the master of the crescent moon - or more accurately, the new moon. So thank you!

I went ahead and started from scratch. The original frame is pretty dark, and I wanted to get the right shading on the face:

shadow on the moon specifically that looked just slightly too bright because if I look at the moon, it takes me a minute to find that shadow area with my naked eye.

I agree and probably why I spent too much time on this part - keep it simple! I think this version is a little better, more real, at least as far as the moon goes.

Even though this frame is darker, I used a graduated mask to emphasize the light along the horizon, which also works nicely with the tree silhouettes. The stars about the same. Tried to just fade them in and not be too overbearing. I think Youssef

I honestly think the stars are not even needed. The cool blue sky and earthshine and sunshine lit moon with the silhouetted trees provide more than enough visual interest.

I think you’re right Youssef. Not really needed, but I had fun anyway just trying to integrate them realistically if I could.

Drama enhanced! I really like the subtle gradient in the sky in the RP. I still like the stars. Now – I can almost see a hint of detail in the earthshine, if you really want to test your sensor…