Osprey with a Fresh Catch 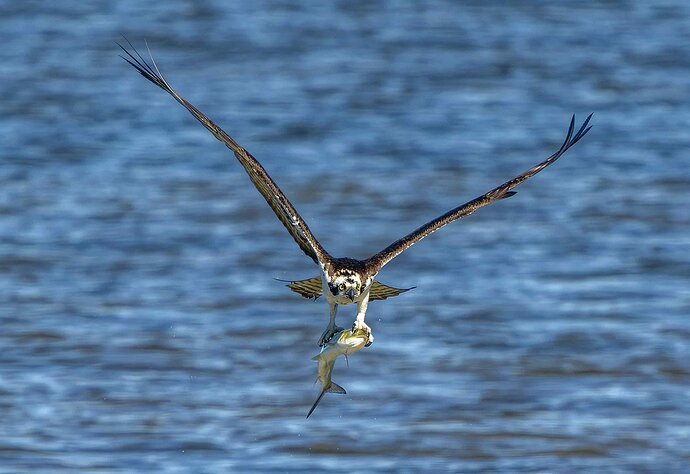 This was taken off the gulf coast of Florida from a fishing pier. There were several Ospreys hunting near the shoreline, so it was just about waiting for the right moment. I caught this one a second or two after it was able to get the fish out of the water which appeared to be a struggle. In the larger view you can see a few drops of water coming off the wings.

This is my first successful shot of an Osprey with a catch in good light and with the new 150-400 lens. I was impressed with the quality even with the 1.4x added. Wondering if DXO oversharpened the image.

Terrific shot! Osprey are big birds, but gracile and when they turn face on they nearly disappear. That combo looks to be outstanding for bird photography, especially BIF. Good crispness in the face of the bird, where it counts.

Thanks much Kristen. “Gracile” - great discription I wouldn’t have thought of. Yes, I had the 1.4x attached and wasn’t using the built in 1.25x. First time I tried that combo in the field. This was shot at 50 FPS with CAF+bird tracking. I was amazed at how 98% of the shots were in focus on the birds face.

Excellent Osprey image, Steve. The head-on angle really works well and having the bird at eye level adds a lot.

Two things really impress me - the fact that you’ve caught eyes of both osprey and fish, and, secondly, the way the background is beautifully blurred and without a skyline. I think I see a halo above the right-hand wing, but wouldn’t sharpen less, just clone out this line. (If you can’t see it, it’s my eyes to blame!).

Hi Steve, nice head on catch! Great point of view and nice to see an osprey with a full fish - I usually get them with the fish’s tail taken off as that is the first thing they do once perched. I don’t think it is over sharpened. Well done.

This is really nice with the Osprey coming at you. Sharpening looks good and the OOF water lets the subject pop. Great job.

Thanks all for the feedback.

Hi Steve, nice head on catch! Great point of view and nice to see an osprey with a full fish - I usually get them with the fish’s tail taken off as that is the first thing they do once perched. I don’t think it is over sharpened. Well done.

Funny you should mention the fishes tail being removed. Early this day I watched and Osprey devour a fish from head to tail, and when he got to the end he swallowed it tail and all. He’s probably been watching too many Herons.

Hi Steve
The head on shot is sharp (on over sharp) and the eye contact and fresh first dinner look great. Nice work.
Peter