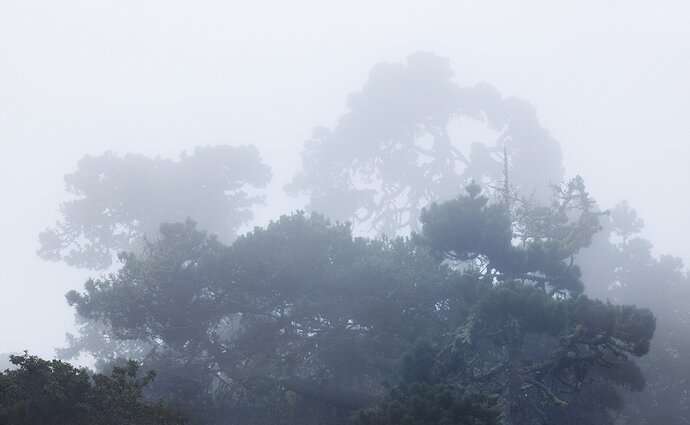 And from David’s suggestion below: 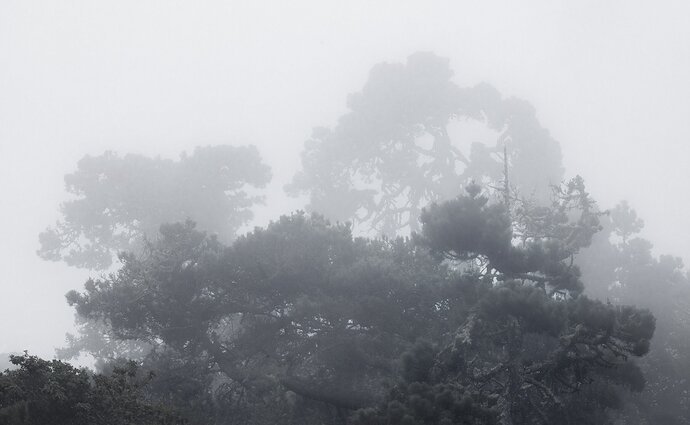 The second day of the Point Reyes trip dawned with heavy fog (not unusual over there) and as I drove toward Pierce Point, with Lon following, I had to stop several times to shoot the trees in the forested area near the south end of Pierce Point Road. Although we both had an agenda farther up the road, he didn’t seem to mind the slow progress.

Minor global tonal tweaks in LR. Into PS for some cloning of distractions and a soft glow.

I like this a lot, Diane. Well seen. I think it works quite nice as is, with a bit of a blue cast to it (I think it’s blue)…I took a stab at switching it to B&W with a tweak to darken the blues and liked what I saw. You might try that too.

All in all a great shot, Diane.

I like the layers in this image with the most detail/darkest tones in the foreground going to the opposite in the background fog. Creates a nice feeling of depth.

Thanks @David_Bostock and @DeanRoyer! I love these foggy tree scenes but go nuts processing them. I think I try to go too far. There is a mix of greenish tones along with cyan and blue here. I added above a B/W with David’s suggestion to push the blues, and I lowered the opacity of the layer to let a little of the original color through. Did a couple of very small cloning tweaks while I was at it.

I had to stop several times to shoot the trees in the forested area near the south end of Pierce Point Road. Although we both had an agenda farther up the road, he didn’t seem to mind the slow progress.

Which is exactly why you had the lead!

The little secret was though, that I was super glad that you pulled over at nearly every pull out! As you discovered, I was more than happy stopping to get out and take a look! I recall at this particular stop, I even walked back down the road a far piece to check out some trees I spied along the way…

Anyway… this is perfectly reminiscent of the morning we spent on our way to the coast. I really like the balance between the subject of the the trees AND the engulfing fog. I like the reducing clarity from front to back created by the dense fog. What a glorious morning this was! (If fog can ever be glorious!)

I’m torn between the two versions. I think the color version with the cool tones works well for me as this is what I remember. But you can’t go wrong with the b&w rendition either.

My only suggestion might be to dodge the LLC to bring it in line with the “fogginess” of the rest of the image. But that’s a minor suggestion.

Thanks, @Lon_Overacker! I agree about the LL corner and will work on it. A Curves adjustment layer should give me the control I need to lighten it and retain a good tonal range. If not, TK to the rescue!