This is a fairly old image shot with the Canon 6D that I reworked last night. It’s a composite shot for dynamic range. Photoshop lacked some features that were necessary to bring it to my satisfaction. I think it still could be better but at least it’s presentable now.

This was my first and only time shooting the spectacular lake. I remember walking around the rim trying to find a composition. Finally I came across these roots and built a comp around them. I liked their texture and how they seemed to glow. 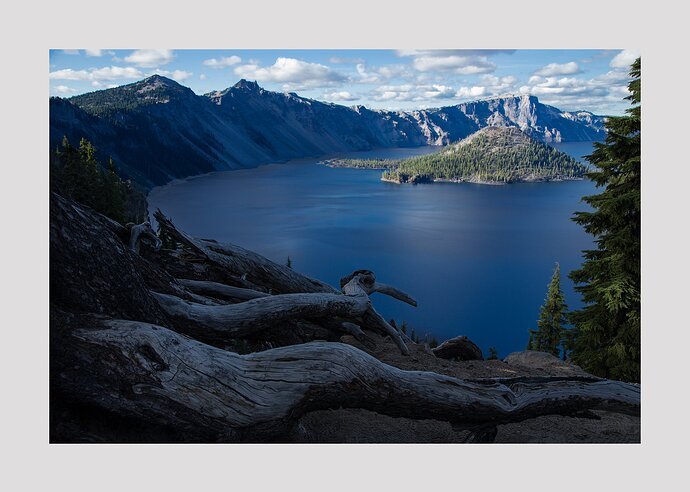 The deep shadows in the llc flowing to the brighter light in the urc works nicely Igor, and the blue of the overall image, and especially the water, is beautiful. I think you have just the right amount of sky. Perfection, to my tastes, would be just a bit of separation for Wizard Island on the right, but it’s a true nit on a beautiful image.

I think the composition here is wonderful and a great capture from Crater Lake. The roots are incorporated and crafted beautifully.

This is excellent as presented. So further comments here are tweaks in the personal preference category. I think the shadows on the rim slope are a little too blue. There isn’t much color separation between the sky, slope and lake in terms of tone/hue. And the island I think could be warmed up; the thought being introducing a little warm/cool color contrast. Small and subtle tweak that may or may not fit your vision.

And being super picky-wishful - just a smidge more tree on the right. Hardly worth mentioning though.

Still like this very much as presented. A wonderful take from this place.

And the island I think could be warmed up; the thought being introducing a little warm/cool color contrast

I was thinking about the same thing. I just ran out of time on this but decided that that was one thing too try. In fact all of your suggestions have also been considered but not acted on. I guess you reach a point where you say “enough” but you know it’s still flawed.

Perfection, to my tastes, would be just a bit of separation for Wizard Island on the right,

There was nothing to be done on that matter. If I had moved to the left the composition of the roots would break down and that was the most important thing to me. I knew when I shot this that the island and tree were close but had to make this compromise.

Really well composed with a great foreground element. Yeah, it would be nice if Wizard Island was separated from the evergreen but not a deal-breaker. Processing looks good except I would reduce the blue from the shadowed slopes in the background.

I really like this, Igor. When I went to Crater Lake many moons ago, I was not able to see any composition but this one is gorgeous. I personally don’t see it as being too blue overall, only perhaps around the 9 o’clock area (If you think of the lake as a circle and the direction you are seeing is 12 o’clock).

Igor, I think your comp looks great. It certainly looks like Crater Lake and yes, it’s a hard place to shoot. The roots make an interesting foreground and the big swing around the edge into the sun works well. The colors have me thinking of good old Ektachrome slide film.

Pretty nice, Igor. I got nothing at Crater Lake, stopped mid-day on the way to the coast. I like the comp and think Lon’s suggestion of more tree on the right is what may be needed. Regardless, kudos for a different take on an Icon.