I came upon this scene on a backroad and was immediately drawn to it. There was still just a trace of sunlight on the background so I waited until the light had evened out. I’m not sure how the tree had been felled but I marveled at how it had maintained it’s grace and beauty even after it was dead. To me it was still a princess even though it was no longer with us. For me it was an image of transcendence. In fact, that may be a better title.

Hope it registers with you as well. Let me know what you think. 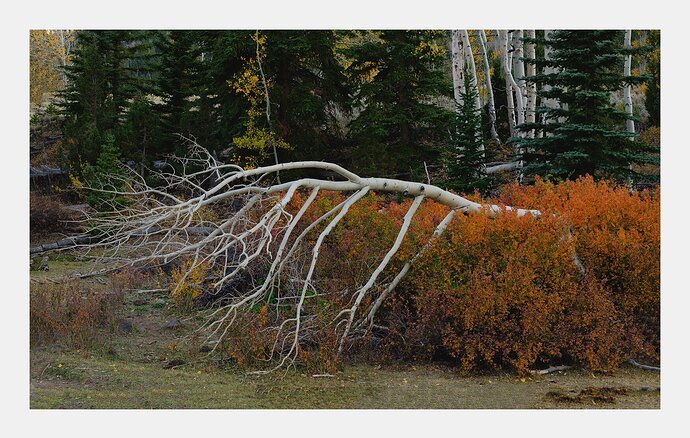 I really like the story this conveys! It is always more interesting with woodland scenes when you can convey something more in the still image. Very nice!

This does tell a nice nature story. And while there doesn’t appear to be any ice-storm involved in the trees demise, it reminds me of the Robert Frost poem “Birches”.

“They are dragged to the withered bracken by the load,
And they seem not to break; though once they are bowed,
So low for long, they never right themselves:”

I like how you included the remainder of the aspen grove, it looks like they are standing in mourning over their fallen comrade. My only suggested tweak would be to clone away the fallen limb that exits the frame in the LRC. Nice bit of seeing on this one Igor…

Yes, Igor I does speak to me also. The tree appears to be a beautiful dancer, whose arms (limbs) are in graceful movement. The colorful shrubs behind help to set off the tree. Lovely story and photo.

Wonderful image, well scene and conveyed.
Like Linda, I was struck by the image of a ballet dancer, in a type of dying swan posture. For me, the image could be flipped, allowing the energy to flow to my right. But then the light yellow trees in the corner above the finger/wing tips would need to be less bright.

I was struck by the image of a ballet dancer, in a type of dying swan posture.

I like that simile very much as it gives me new insight into it. The thing about images like this is that you are drawn to them without fully comprehending why. Something inside tells you to shoot them and you follow that pull. At least, it’s like that for me. “The dying swan” - excellent!

Very expressive and as mentioned, a great nature story.

Not sure what could be improved here, so what I suggest would just be tweaks. I could see raising the white pt of the tree itself - ever so slightly as to not change the expressiveness. Then I would thinking a shaved crop off top and right, but not sure if that would change or improve things.

Beautifully seen and captured. - Interesting observation - there are no branches facing upwards… does that add to the intrigue?

Thank you for your comments. This one didn’t garner much attention. I actually like it quite a bit. Yes, the whites in the tree could be elevated a bit. That’s probably would be a good idea.