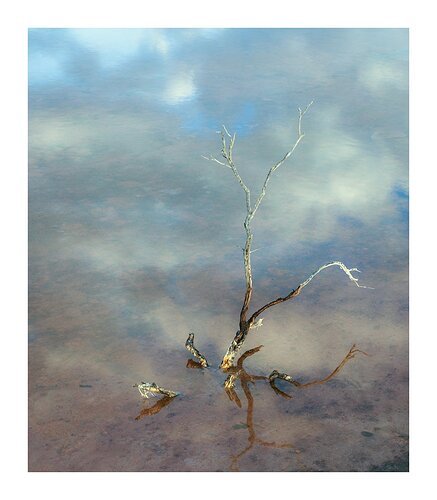 “What is this image about?” I don’t know exactly. I showed this to a friend of mine the day before yesterday who told me it made her think of a close friend who is struggling with cancer. Her battle is a struggle towards light and healing.

This image has sat in my archive for several years now. I was never satisfied with it. One day it looked promising, the next day it did nothing for me. It started out being an attempt to display a white branch on a shore next to reflections but I never quite found a subject I liked. So I went with the flow and worked on what was there rather than my preconceived image.

Recently I went back to it and raised it’s exposure while dropping it’s overall clarity. That seemed to give it the dreamy look I wanted. A small color change has been made as well (during this posting, as a matter of fact).

Here is the earlier color cast. Which do you prefer? 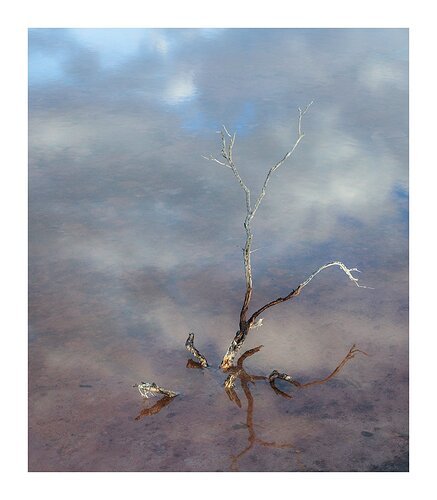 Do the colors look right?

A suggestion was made to center the branch. Are there any crop suggestions?

It is a very fine image but I have to agree with your intuition. When I look at the second version my whole body just says, “yes.” But ultimately I believe it comes down to your vision. It isn’t as though the first version is “bad” or “wrong” but the choice of colour and tone . For me, for example, the first version has more tension. It may be due to the tonal and colour contrast and the added clarity between the branch and the cloudy background. So if your vision had to do with some kind of battle then maybe the first version works best. But if your vision is more about equanimity then the second version might speak to that more eloquently. That all being said, it is a powerful image that bears repeated viewing.

I love this type/style/kind of imagery. In fact I would say it’s really not any different than any of my recent dogwood images… That is to say you have a main, interesting subject set against an unobstructed background that in itself is also quite beautiful.

I love this as presented and don’t suggest any cropping or attempt to center.

As far as color and the processing, I prefer the 1st one posted (above the text.) I believe that is the one that you raised the luminosity slightly and did a slight color balance. The color looks very good to my eye. I like how you processed this one. The changes from the one posted below the text are subtle, but I think improved the image! Nice work, I love this one.

That all being said, it is a powerful image that bears repeated viewing

Thank you for that. This was sort of Alberto’s point when he said that he’s drawn to simple compositions that invite you to observe their nuances. The goal, as far as I’ve read, is to interest the viewer as long as possible. One of the goals.

I hadn’t thought of that but you’re right, they have many similarities. I’m glad you liked the image. Frankly I didn’t know how it would go over. When you’re reaching for something new (to you) you just don’t know. But those are the fun ones.

As I mentioned on FB the other day, I really like this a lot. Of the two posted images here, I greatly prefer the original, or bottom one. The top one appears to have a slight greenish cast to it on my monitor. On my composition remark the other day, I didn’t want the tree centered, but I did think it might look nicer with the tree placed on the left side so the branch pointing to the right wouldn’t be pointing outside of the frame. I do love the reflection in this too.

I would say somewhere in between both of the white balances would look nice. The first one feels too yellow/green and the other feels too red. Somewhere right near the middle of the two would be sweet I think so you get that perfect separation and tonality.

I would say somewhere in between both of the white balances would look nice. The first one feels too yellow/green and the other feels too red.

After looking at this a few times, I agree with this. Your composition works nicely as presented. I like the starkness of the tree against the sky.
-p

The subject matter is quite interesting, and I like the reflection it is set against. I don’t know that you need to center the branch, it looks quite good as is. Centering works very well if the subject is symmetrical, but in this case, the branch really isn’t, so it does well offset. In terms of color, I prefer the one that is lower on the page. The first one has a bit of a yellow/green cast to it, whereas the one posted lower looks to be a more natural rendition of the scene.

Igor, I’m thoroughly enjoying the mix of stark, twisty subject and inviting background here. It’s an image where each viewer will interpret it through their own experiences. I see it as a statement on how the natural world is constantly changing cycle of death and renewal. I prefer the warmer colors of the original post, because they let me feel better about the renewal aspect. I wouldn’t change the comp. as the slightly off center branches add some extra tension.

Hello Igor,
I really love this image. Everything about it works for me. Personally I think I favor the top re-worked image. This is just beautiful.