Redbud in the Evening +Rework 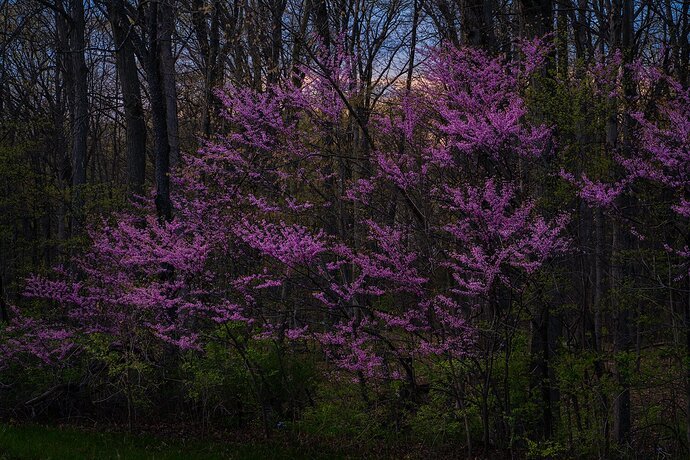 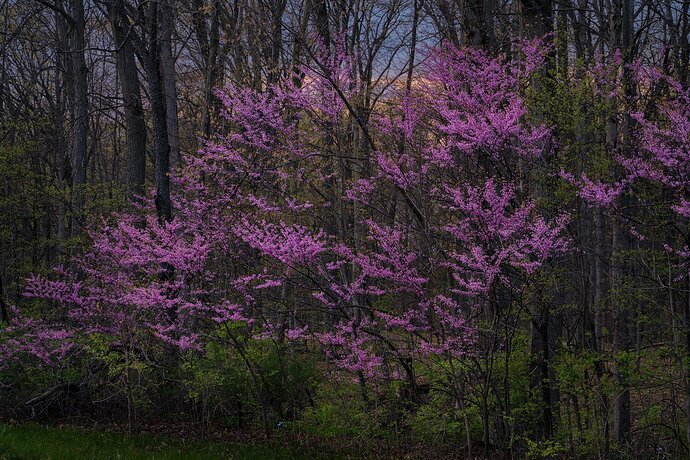 I think this one handles the sky better: 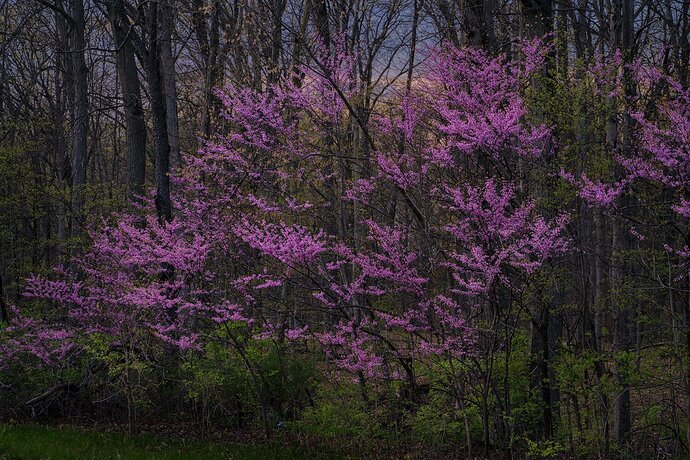 Redo of the blend and some lightening… 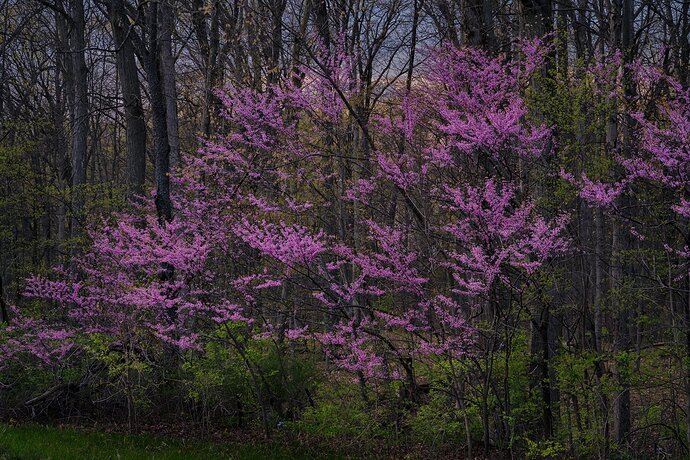 I went out to a local park a few nights ago to shoot the redbud trees. I knew we were supposed to get some snow, it ended up being 3 inches, so I wanted to shoot before they may take a beating from the storm. Normally I understand the goal of woodland to be to exclude the sky, but I had my longest lens on and my tripod as high as it would go so I kind of ran out of options but to include it. So I blended the same exposure together here, once for the sky and once for the rest of the scene. The goal was to make the highlight the way the redbud trees seem to pop out form the green/yellow/brown of the forest in spring. This was the most chaotic scene I shot that day and the most complex for sure.

Does the composition work for you? I tried to put as much space between trees as possible and fill the frame from edge to edge with the buds.

Does the edit work? Again, I tried to help the redbuds pop out from the backdrop as they naturally do in the spring while also downplaying the back drop by cooling it slightly and darkening it.

Looking at it on NPN vs Photoshop it seems dark, probably due to different background colors, I will potentially lighten it up this evening a bit).

It is a very early Redbud season here and we had an unusually late snow to go along with them so your post was very timely and caught my eye. I really like the diagonal flow of your composition and I think you did a nice job of filling the frame with a beautifully balanced splash of color.

For my taste this is a bit too dark and the deep blue sky is where this is the most telling. I would look at bumping the overall exposure up a bit and removing some of the saturation from the sky. I think even with a brighter exposure the redbud will standout nicely. They are so brilliant that they nearly glow in any light except the most harsh direct sun.

That is a very nice (and large!) red bud. This seems to be a good year for them, just about everywhere. I’m with Alan on the darkness; I think increasing the exposure just a tad (not much) might give it more life (although I have to say that, even though it is dark, you have good detail in the shadows). Definitely desaturating and darkening the blue sky would be good. As it stands, it is the brightest area in the frame and does grab my eye.

Hey, @Alan_Kreyger you probably got what we just had! 3 inches overnight then it was gone by late afternoon, crazy weather supposed to be 80+ next week.

I really like the diagonal flow of your composition and I think you did a nice job of filling the frame with a beautifully balanced splash of color.

This is exactly what I was aiming for so I appreciate that.

For my taste this is a bit too dark and the deep blue sky is where this is the most telling. I would look at bumping the overall exposure up a bit and removing some of the saturation from the sky. I think even with a brighter exposure the redbud will standout nicely.

Right before I left for work I took a quick crack at it and upped the exposure generally as well as dropping some saturation. I also added in @Bonnie_Lampley suggestion of trying to darken the sky as well. I just hope it doesn’t look a bit…funky. Maybe it came out ok. Generally, I wish I could have excluded the sky but i didn’t have the tools for that in this image. I have some others that I haven’t worked on yet where I was able to do a bit more of that. I experimented with this one a bit by pushing my editing a bit further than I generally like which I think led to it being significantly darker and more saturated. Hopefully the re-edit corrects some of that.

Version 2 is significantly better. For some reason the sky and trees are brighter in the upper center. I would look into that.

@Igor_Doncov you are correct, I’ve been hacking away at this sky for a while now and I feel like I’m butchering it!

Does the composition work for you? I tried to put as much space between trees as possible and fill the frame from edge to edge with the buds.

I think your choice to fill the frame with redbuds from edge to edge was a good one because it emphasizes the strong colors and texture. I think your spacing and arrangement of the tree trunks is well balanced and brings some nice structure to the image, which helps prevent this from becoming just a two dimensional wall of color. The trees add some depth and dimension to the image.

By including the tops of the redbuds you were also able to show more of the tree trunks, which I think helps the composition. It comes at the cost of including some of the sky, which potentially could be a distraction. In your original post the sky was both too bright, and too saturated a blue, both of which grab the viewers eye. In your reworks you are moving in a better direction, the blue saturation and luminosity is lower (although right center top is still a tad bright as mentioned by @Igor_Doncov ).

The 2nd rework still feels a bit dark for my subjective personal taste. I did a rework where I lifted the darks, using TK D2 minus TK D5 subtracted luminosity mask to lift shadows while retaining contrast. I also de-saturated the blue in the sky a bit further too. 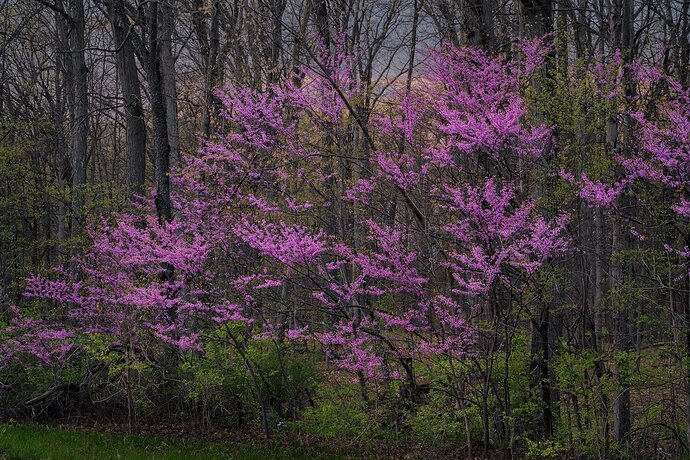 When I looked at it this morning before work I noticed some of the issues were due to some ghosting in the blend. I went back to square one and redid the blend and looked at each of the layers added and how they were impacted by the new blend. Many of them stayed but I did throw a few out. There is a new version at the top.

I did something very similar to this @Ed_McGuirk which I have seen you mention to me, and a number of others, before. This is a great way to get some of that detail back out and lighten the image without losing the dark shadow areas. I’m hopeful that this version reduces the blue the blue in the sky, darkens it, while also lightening the foreground. Fingers crossed!

What a gorgeous subject, David. I like your version 3 best. I played with it and boosted the saturation somewhat. Actually, I may have gone overboard with the saturation, but It’s easy to tone it down. Just throwing this version into the mix. 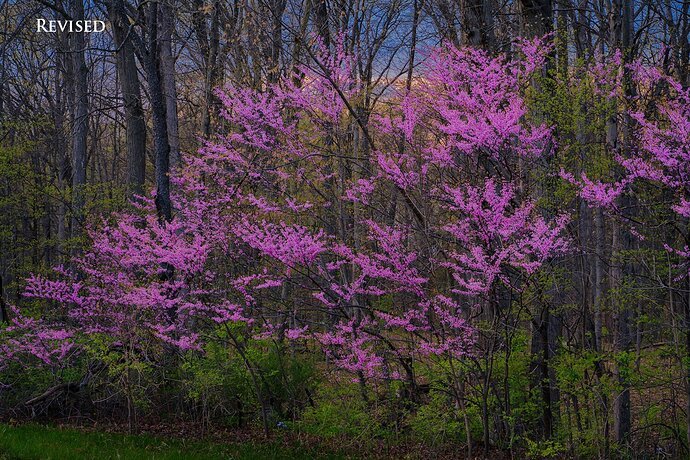 Hey @Bill_Chambers thanks for sharing that. After comparing the two, mine looks a bit washed out. There is probably a happy medium in there somewhere. I will take another look at mine. Thank you!