If you’re ever in Grand Cayman and hankering for a landscape location, go to Smith Beach. It has countless rock formations and pools that serve as a seriously target-rich environment for sunset. While it’s got plenty of people, there’s lots of space to move around. I had settled on a stunning composition (or so I thought) and set it up. It had sweeping rocky coastline in a sinuous pattern serving as a craggy but clear leading line towards the sunset…with waves coming into an alcove and a little crab playing in a pool in the foreground. It was pretty freaking amazing, but there was someone hanging out on the rocky prominence right where the sun was going to be setting, and I think she was face-timing a friend or family member. After patiently waiting, she never left, and I was running out of light. So, I went elsewhere and got this consolation prize. Let me know if you think this works. 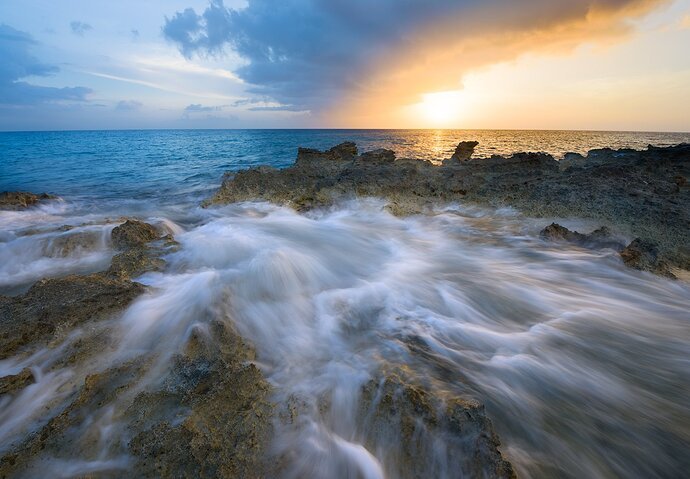 Jim, what a sky! The light is very drama. Epecially with the warm/cool transition. I think the foreground is not ideal but not necessarily bad either. I have a few suggestions:

Hey Jim, it was a standout image for me…in the New Images. I like the shutter speed you chose for the water, and I really like the cool colors to warm colors transition as you go back.

I could totally relate to the girl sitting on the rock. More and more, that happens to me. And because these folks generally don’t move until the sun is set, especially if they’re talking on the phone, and the fact that they are seemingly oblivious to the fact you are wanting to photograph the scene, sometimes I just shoot away anyway, and clone the person out later. Maybe I’m too lazy to move

But I love this shot you got!

Love the blue/yellow contrast of hue in the sky, Jim, and the overall comp. A shot that really pulls the eye in beautifully, with interest in fg. mid-distance and in the distant skyline. I would, like Adhika, just straighten up the horizon I think.

Fantastic color Jim and a great photograph. I might try a little more contrast in the sky and increase shadows a bit on the shore to the right. However, it is such a wonderful composition maybe none of the is really needed.

Thanks @Adhika_Lie! I always appreciate your perspective. Regarding your first point, you’re right…I was assuring it was not as bright as the right side of the sky, but didn’t regard the left as much as I should’ve. I’ll work on that and repost.

The middle rock and much of the rock in this area has brightness at the water line and darkness above…it’s a naturally occuring phenomenon that I believe relates to algae or fungal discoloration of the rock above the waterline? Maybe someone knowledgeable can enlighten us on this. Still, your point is well taken. I did burn some of the darker aspects of the rocks above the water line and as I look at it now, I agree with you and @Dean_Salman. So thanks to you both for that point.

Regarding your third point, as reinforced by @Ian_Wolfenden, I’ll fix that as well and appreciate you bringing that to my attention.

I’d say a pretty dang nice consolation prize. Not sure I would have moved given how quickly things change at that time of the day - so kudos for making the best out of the situation.

I like the trio of elements in balance here. that would be the rushing surf among the rock at the bottom, and then the two halves of the sky - Warm, cool, combined very nicely. I love the texture and motion in the water - Just right…

Not sure if this has been mentioned, but there’s just one small nit/suggestion for me. The rugged rock line nearer to the water is a bit dark and looks like the effect of a graduated ND. You didn’t mention using one and did mention blending of exposures. Also, it’s entirely possible the rocks are dark! Not a big deal and since I wasn’t there, can’t be too critical on that one.