I would really like some feedback on this image. This was taken while on a month long canoe trip with my wife along the Berens River, which flows from Northeastern Manitoba down to Lake Winnipeg. Even on a 30 day trip into a wilderness that is all but free of light pollution getting a clear night is surprisingly rare – there were only two over the length of the entire trip. And, of course, being that it is in an area that is more water than land, even a clear night has humidity, so no crystal clear skies like you get in Utah or New Mexico. My vision for this image is based in fantasy (obviously the human eye doesn’t see the sky like this): one of my favorite books is J.R.R. Tolkien’s “Silmarillion.” It is about the earliest period of Middle Earth before the coming of Men when the sun had not yet been created. So the only light in the world was star light. This image is trying to imagine what that would be like. But even though it is a fantasy image it still has to have a naturalness to be believable, that the viewer can buy into. What I want to know is the extent to which I have been successful. Does the lighting and the tonality work, regardless of whether you are aware of my vision or not? Is the image captivating over and above any wow factor that Milky Way shots tend to illicit? In other words, is this an image that you’d like to spend more than 15 seconds with on your iPhone?
Technical details: This is a blended image. I shot 17 frames of the night sky plus 5 black frames – Fuji XT-2, Rokinon 12mm, ISO 3200, f/2, 16 sec. Four hours earlier, with the same tripod set-up, I shot the same scene just before sunset and then again at dusk – ISO 200, 12mm, f/14, 16 sec. It was a tough blend, not only because of the tree and the light bleed but because there was also a breeze. I almost gave up on it in the post processing but I think I worked it out. I did some preliminary pp in Lightroom (I use Dave Kingham’s protocol for establishing white balance) and then the 17+5 night sky frames were syunched and stacked using Starry Landscape Stacker. Then I blended and did the rest of my editing in Photoshop largely using the TKv6 panel. The post processing is such a drawn out affair for me that I lose any objective sense of the results. Besides the light and tone of the picture, I wonder about the stars’ reflections on the water – too intense, too many, does it work having them there at all (they were in the image as shot. 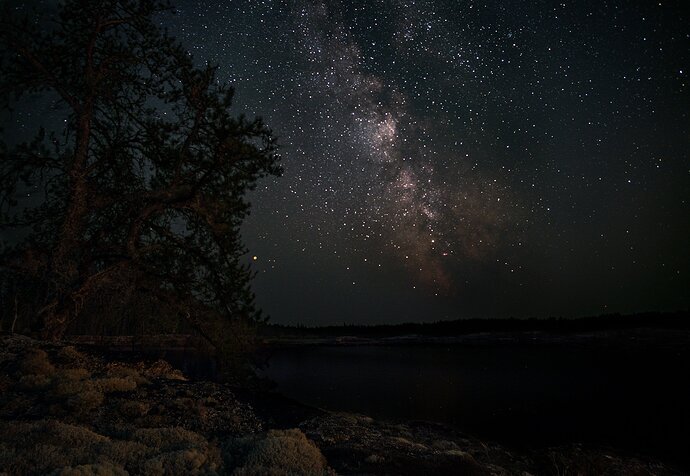 That sounds like a lot of work and a not of images to pull this off.

My first reaction to the image is the foreground needs more light. I don’t know what the images you blended that you took before sunset looked like. Seems like they would have provided more light there. You asked about the stars in the water. Until I opened the large image, I couldn’t see any stars in the water, nor did I know water was there.

The sky looks pretty good although with that many stacked images, I’m surprised there weren’t more stars.

I tried to work the foreground water, the tree and the lower left section fading into the lower right to see what details might be there even in the jpeg. Here’s my result. Don’t know if this helps with your overall vision for the image or not, but I do think you’ll need more in the image to really capture a viewers full attention. 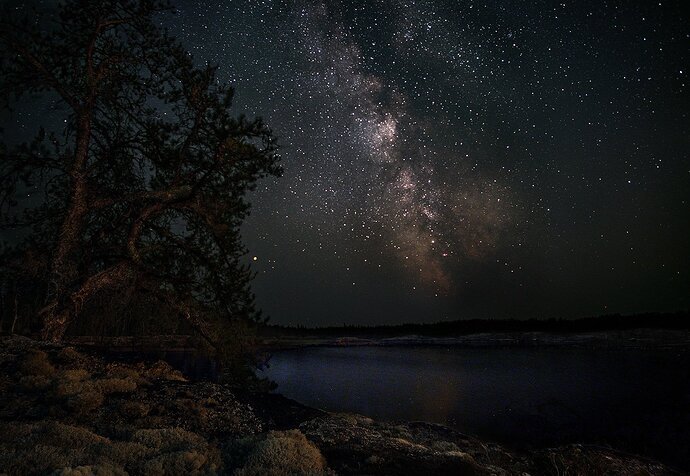 I like this, and I think that based on what you were wanting to do, that you accomplished it.
I don’t think the FG necessarily needs to be lighter for the kind of image you want. I do like how Keith’s version turned out, but if you want to portray light only coming from the stars, then your original does that for me.
Is it a little difficult to see? Yes, but that’s what I expected after I read your text. It would need to be viewed in a special way; either in a dark room or against a black background, but it works for me. If you want to know if people would look at this on their iPhone…well, I’m not sure. For me, it’s hard to see dark images on my phone, but that’s partly because I have a plastic cover on it, and I think lots of people do not do that.
Cool image, and yeah, that’s a LOT of work!!

I have very little experience with night photography but have seen quite a few. I prefer images where the light looks natural yet still realistic. I think you have done that very well. I like the fact that tree looks dark yet details are still visible. In my experience at night the land looks cool or devoid of color so I would try to cool the rocks and trees (although I really like the warm tones in the bark).

I really like this image actually. The separation of tree from sky is my favorite part. I think you should be able to get a great composition with just tree and stars.

On the technical side there is a fair amount of noise in the sky which you can probably remove, and that may make the stars pop a bit more. Also, there is a really big yellow star close to the bottom of the tree that draws the eye. I would clone it out. You could work on that far shore to bring out a bit more detail. I like the lake dark the way it is.

I like what you are aiming for in the image and I think it is a solid composition. I also prefer more realistic night photos with more natural light, like Igor mentioned and your WB is spot on. However, I also think this could use a bit of a touch of foreground lighting on the rocks and the tree, and some star reflections would really enhance the fantasy look you are trying to achieve. The sky to me looks like it has too much noise reduction on it, suppressing all but the brightest stars. Maybe that is just an artifact of the upload. I’m assuming the 17 sky shots are not a pano, since you are using a 12 mm? You probably don’t need more than 1/2 of those for a stack for NR, if that is the case.

It may be a little dark as it fades off to the right. I think somewhere between yours and Keith’s will be the ticket.

I’ve got little night photography experience and even less so with the processing, but would agree with Igor and surprised with the black frame and stacking that the sky is noisier than I would expect? But then again, maybe it’s already tons better than the noise in a single frame?

Minor and could be an illusion, but I get the sense this is tilted a little CCW? I know the far shore is receding so maybe that’s it.

Thank you all for your feedback, it has been very helpful indeed.
Keith: Because I want a more natural feel, I don’t want to push it as far as you have in the example you posted. But I can’t tell you how much I appreciate your taking the time to show me an alternative approach. It clarified for me that the image could, indeed, use a boost. I have included a second run at it (below) 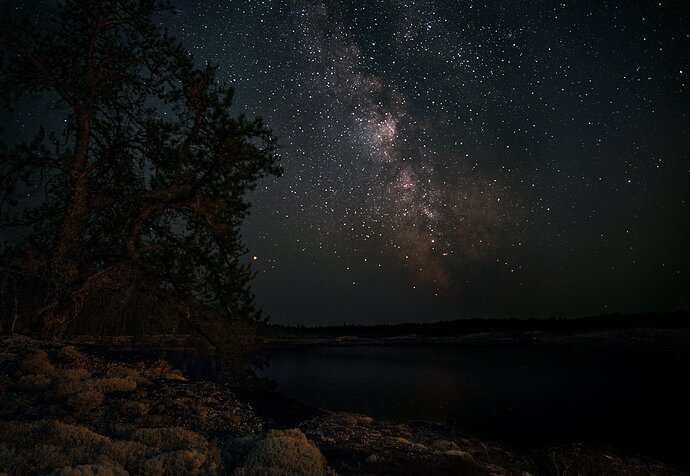 Simarillion-Night-25002500×1726 4.58 MB
where I have bumped the brightness, a slight increase in exposure and some additional light painting to the shore highlights. I think it does improve it considerably, particularly in giving more tone and texture to the water. Keith, you wondered why, with a stack of 17 images, there are relatively so few stars. I wonder the same thing too. I have never been happy with the results of my night skies compared to others I have seen. Is it because of the atmosphere – the high relative humidity of the places where I’m photographing compared to desert locations like Utah or New Mexico? Or is it because of something I’m doing or failing to do when shooting or in post? I’m hoping that @David_Kingham , given his expertise in this area might offer some feedback. As far as I can tell, I’ve followed all the technical “rules” regarding execution and post processing night skies but I may well be missing something important that is undermining my efforts.
David_Kingham (David Kingham) November 4, 2018, 1:53am #8

Glad to see you here Kerry, and nice image! Here are my thoughts:

Phew! I think that’s enough for now, let me know if you have any questions!

Wow, David, this is incredibly helpful. It is the kind of help I’ve been looking for since I started trying to do night sky images. It is also a bit discouraging - I thought I knew what I was doing and now I’m finding I really need to go back to the drawing board and give this all a re-think. I confess, working with the Rokinon lens does feel hit and miss but it seemed to me that this was in focus but I see what you’re saying - even a little out will obscure stars. Do you shoot with a Fuji? If not the Rokinon, what lens would you suggest would work best for this kind of shot? How do you focus - focus to infinity during daylight hours and then mark it with gaffer tape? Or is there a way you can do it accurately at night? Shooting at 6400 sounds counter intuitive. Given the noise factor I assumed that lower ISO would naturally be better. What is it about stacking that you don’t like and if you no longer go with stacking how do you satisfactorily remove the noise? Are you basically using only one frame for the sky and then blending with a brighter day-for-nigth frame ? I did another series on a different night using my 16-50 f/2.8 and judging by the RAW images it does indeed look more in focus. It is also a little brighter (probably because I was getting some backlight from the rising moon. If I were to work on that would you suggest not stacking and just working with a single image and getting rid of the noise with something like Topaz? The frames I shot for the foreground in either case are reasonably bright - the histogram more or less in the middle. I don’t think I’m going to spend much more time with this image - the sky just isn’t done well enough to warrant more time and effort. Rather, it might be better to take a run at the other shot and see if I have a good enough exposure to get a better sky. I really would like to get your opinion on a better lens and best practices for focusing and maybe get your feedback not only with the sky but also best practices for blending as I give this other image a try. By the way, I have your video tutorial “Delicate Arch Night” but it sounds like you don’t exactly follow that script anymore. Do you have or can you suggest a tutorial that might be helpful if I want to take the next step and improve, at least my technique? A lot of questions, I hope you don’t mind. I can’t tell you how much I appreciate your feedback.
I wasn’t sure, by the way, about that red spot -whether it was Mars or a wayward pixel.