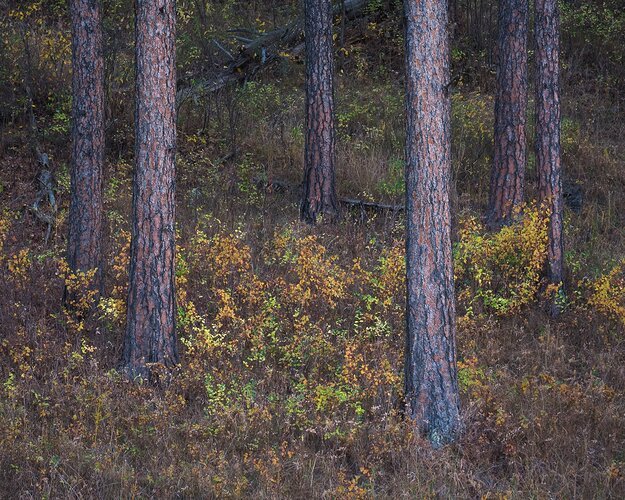 Mainly looking for post-processing help! I’m no master of Photoshop and really struggle with scenes like this that feature grass and/or foliage (but especially grass, and especially in low light). I find it hard to add contrast without making the image feel too contrasty and crunchy. I could always reduce the contrast I’m adding in, but then the image feels flat. There is a lot of texture in images like this, but I feel like there should be a way to accentuate the texture without making the image too harsh, if that makes sense. Curious if anyone has tips on this.

Open to feedback, but not primarily what I’m looking for today.

My basic processing pipeline is as follows:

Lovely scene, and you’re right about trying to add contrast to a scene like this without making it crunchy. You just can’t increase global contrast with a slider and keep it looking gentle.

I’ve found what works for me is to do local adjustments to the specific areas of similar texture or areas that you want to emphasize. I know you weren’t looking for specific advice on this photo, but I took a crack at some adjustments because I find it easier to explain with an example.

In your photo, I liked the sense of depth, even though the light is flat. So, with the idea to increase that feeling of depth by making the background visually recede, I pulled a gradient over the scene (in ACR, not PS), making the upper part of the frame (the background) cooler, darker, and less texture-y. I then brushed that off of the main trees. The color gradient from warm foreground to darker, cooler background gives the sense of receding scenery. Reducing the texture (lowering clarity and texture in ACR) also gives a visual clue that the background is farther away. [Of course, this probably wasn’t your intent, since you focus-stacked the image. ]

Then, with the idea that the large trees are an important feature in the frame, I tried to accentuate them by warming them up and increasing their texture (increasing clarity and texture, and brightening the lights, all in ACR). Then, I brushed on a bit of vignette in the LLC and LRC, to bring the eye into the scene more.

If you’re working in PS, basic dodging/burning (esp. using luminosity masks) works well to increase contrast in specific areas, as opposed to using the global contrast slider. Personally, I tend not to increase midtone-only contrast for these types of scenes. I usually only increase local contrast by dodging/burning. It takes more time, but, IMO, you don’t risk the crunchy look that way.

I’ve gained a lot by watching Alister Benn’s Expressive Photography youtube channel. He really gets into these ideas, and his concept of “transitions” (like warmer to cooler, more detail to less detail) to add depth and visual interest. 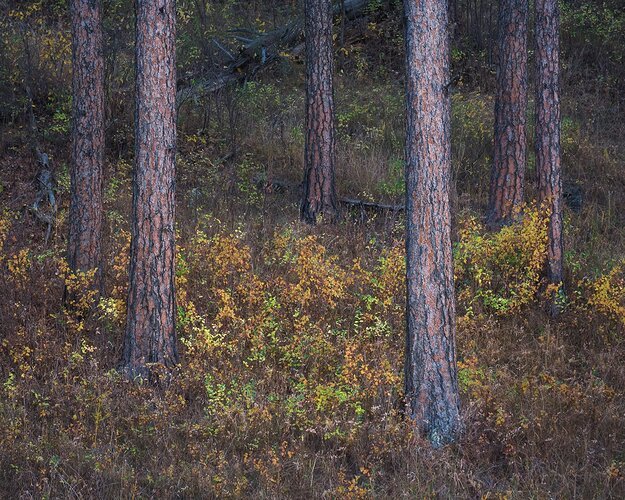 @Bonnie_Lampley, this is a great explanation and hits one of the key points I was going to touch on. The use of the clarity and texture sliders may be the most important pieces in my workflow when working on super detailed woodland scenes like this. Typically I want the texture in the trees and will mask out any texture/clarity adjustments I make there. The other thing I like to do to show depth in a scene like this is pull up the blacks via a curves adjustment and then load a darks selection and just paint it in to places that should be further away in the image. Another way that I soften things in an image like this is to use an Orton Effect and then mask it out of the places I don’t want it. Bonnie is correct, Alister Benn is an amazing resource on YouTube.

@Nick_Becker This is already a great image. When I first saw it, something about the cool blue tones on the trees really pulled me in, you are on the right path here for sure!

This ‘simple’ image has a painterly look to it. The composition of repeating vertical shapes and one brighter horizontal shape is really well seen and done. But there is good texture throughout.

@Bonnie_Lampley - Thanks so much for your detailed insight. You’ve given me some good food for thought here and I’m definitely going to take a more careful approach with my adjustments for this image and others like it. I also appreciate your reminder that not every image needs the midtone adjustments that I often apply without much consideration. And by the way, I like your take on editing my image!

@davewallace - Thanks for the feedback and the kind compliment!

The other thing I like to do to show depth in a scene like this is pull up the blacks via a curves adjustment and then load a darks selection and just paint it in to places that should be further away in the image.

This is an interesting idea. I’ll have to give that a try!

@Igor_Doncov - Thanks so much; I’m glad that overall the textures look good to you! Always nice to hear for images like this.

Nick, what a great intimate scene image. I think the repetition of vertical lines makes for a great composition, and the arrangement of the trees creates a nice sense of depth. I think you struck a nice balance on texture here. To me the texture of the tree bark is very interesting, and having too much texture in the ground would compete with the texture of the bark. I also like the warm / cool color contrast, especially between the reds and blues in the tree bark.

Here is a rework reflecting my comments. In Photoshop I used a TK Yellow/Red Color Mask to select the warmer tones in the image, and then thru this mask l added a PS Color Balance adjustment layer, and increased yellow to warm up the warmer tones. I then placed a mask on this to apply it only to the ground cover, and not the trees. I also used some slight negative clarity in Lightroom, and brushed it in only to the ground cover. This created some contrast in texture between the tree bark and the ground cover. 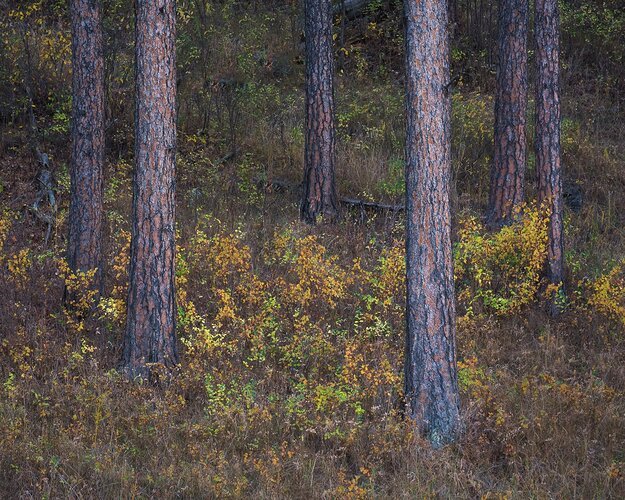 @Ed_McGuirk - Thanks for your kind words, Ed! Sounds like you too noticed many of the elements that drew me to this scene.

Interesting take! I love hearing about other people’s methods and will definitely take this into consideration when I rework this image. Thanks again!