Snake on the ice

This is a first for me. My grandsons and I were walking along a frozen canal in November and I noticed what looked like a car fan belt in the middle of the canal then it started to move.
The day was overcast and I had the aperture set to F4 so this is not as sharp as I would have liked it, especially the eye.
Any help on what I could have done better is appreciated. I have a lot to learn.
Brian 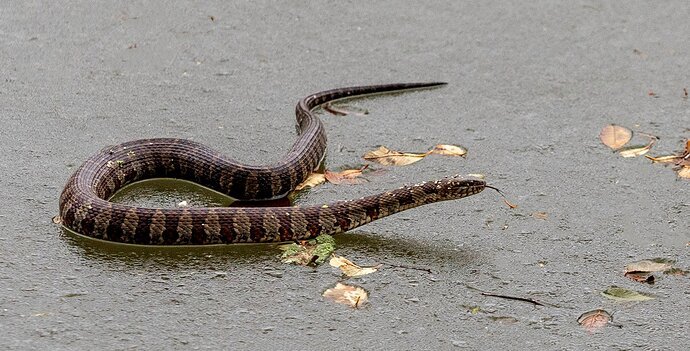 Definitely an odd find, Brian! I wouldn’t think that a cold blooded snake would be out playing on ice! I bet it was moving pretty slowly. I think you did a good job of capturing it but if you wanted more of the snake (it’s tail) to be in focus you might have tried something like f/8 and then raised the ISO somewhat to keep the shutter speed. Because of the textures in the snake and the ice, the little bit of noise that you would get from a higher ISO probably wouldn’t be noticeable.

Amazing capture Brian. Think I would have run! Just curious, what was your focal length? If the snake was moving slow, as Gary mentioned, could you have gotten closer?

Brian, this is a good shot of a fascinating natural phenomenon. The details in the snake parallel to the camera look good. It looks to me like the eye is in shadow (which from the shadow below look like it’s in the 1 - 2 stops down range), so I don’t think there’s much you could do to get more eye detail other than get a different sun angle. I think you can do some (more??) dodging of the head and eye to make the details a bit easier to see. The leaves and ice also look good. BTW, if you want to make directly comparing the two posts easier, load both versions of the image into the same post. Then a viewer can go to the large view and arrow back and forth.

Hi Linda. My focal length was about 145mm with a 70-200. This is a strong crop which adds to the noise. Unfortunately the ice was thin so I did not risk walking out to get closer and lower.

Totally understood. I was just wondering. I think it is an amazing photo. Thanks for posting it.