Thanks everyone who commented on my previous image! Much appreciated.

I need help on this one, folks. I like the composition, I like B&W for it but, it’s still very busy and I’m not very pleased with the sharpening. I would appreciate HONEST opinions and suggestions for improvement for any aspect of the image.

I softened the BG a bit to help emphasize the main element more, but don’t know if I softened it enough.

Thanks in advance for your attention and help. 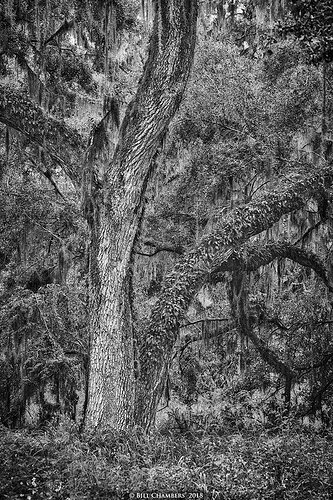 Bill, this is a nice concept, the tree has an interesting shape, and your composition of it creates some interesting diagonal lines and triangle shapes. What I do have a concern with is that your subject doesn’t seem to have much separation from the background. Some of that lack of separation is due to the tonality of the tree and the background being pretty similar. Some of it is due to both the tree and the background having some texture, so they tend to compete with each other for attention.

I really like what you have put together here, Bill. The B&W works beautifully and I love the graceful lines of the tree. I think you are OK on the sharpening. My only suggestion would be to lighten the FG tree just a bit and darken the BG as they are just about the same tonal range. I think that would give them a little more separation.

Bill, I like this quite a lot - but can’t put my finger on why… The sharpening looks good to me and I’m not sure that softening the bg helps separate the tree. In fact I would say that it’s the tones that are preventing the separation as Ed touched on. This makes me curious and think the color version would work better if you’re trying to separate the tree from the bg; let the color (grays vs. greens) do the separating. But I do like the b&w processing. To me, it’s more like the tree is camouflaged and hiding among the swampy forest bg rather than standing out or being separated. Not sure if that makes sense.

The other thing on sharpness, details and depth. It just looks like a scene where even at f/8 or even at f/5.6, the distance, focal length, etc. are going to provide enough depth of field to make most elements sharp enough. In other words, this is not a flower shot at close range where one can make the bg go soft at f/5.6.

Not sure if any of this makes sense. I’d say go with detail and sharpness throughout and let the tree shape/form do the separating. The comp is excellent and you’ve filled the frame enough with the tree to let the viewer know that was your intention.

I’ve looked at this several times trying to provide something valuable. I’ve even written comments and erased them. The ‘controlled chaos’ concept provided here is really good. I don’t think it’s busy in that sense. But I think it’s busy in the sense of it’s tonality. The image would be stronger if the background was more even toned. Some of the black areas are too strong. I would try dodging the upper right and left corners and the lower area next to the tree. It’s unusual for the dark areas to be distracting but I think it is in this case. Just my 2 cents. I could change my mind tomorrow.

Wow, Bill, now that’s a lot going on in one frame for sure. I think the light is good with good contrast, and the angle of light seems to cooperate to give nice definition for the shaded parts of the tree. And yeah, I agree, being in such busy surroundings really makes it a challenge for the eye to settle on anything in particular, although the subject itself stands out reasonably well. Hard to tell, but maybe a different time of day could work(?)

I love the idea, but to me would be hard to pull off due to the background having so much detail. Have you tried processing as two different layers in PS and then blending the tree in to help create separation? Like one layer pretty dark and the other pretty light with a mask then carefully work the background in?

Sorry for my delayed response; I was out of pocket yesterday. Thanks all for your comments and suggestions. I think I will try what Lon and Bobby suggested first - going with color to hopefully aid in separation as Lon suggested and also try double processing it and blending as Bobby suggested. I will post the results later today or tomorrow. Thanks again!!

Yes, it’s busy and the tree kind of gets lost in the image, but I actually really like that! I like that I can see it, but at the same time, I’m forced to “search” for the details.
The only thing that distracts me is the blur in the leaves in the very top right corner. Other than that I love this!

OK, I went back and double processed the image and blended with a brighter tree and darker BG, and then converted one of them into B&W and left one in color. Well, I didn’t think the B&W turned out well at all, but I would like your thoughts and suggestions on the color version. 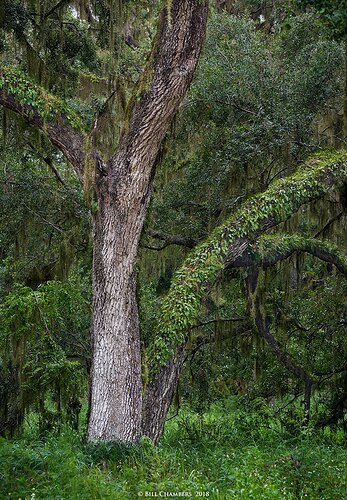