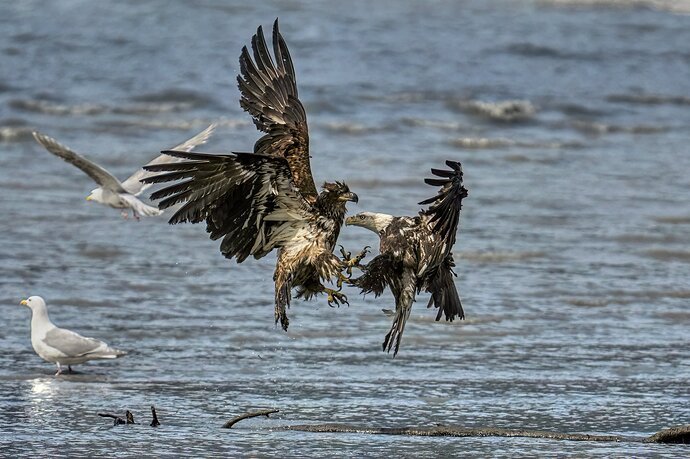 The Pink Salmon run has hit Valdez and the tide flats become a war zone for Bald Eagles and seagulls as the fish get stranded in the mud as the tide goes out. In this case, a salmon wasn’t directly involved. They were squabbling over perching rights on the driftwood.

What do you think about the seagulls ? When the fish are stranding on the tide flats the seagulls are far more numerous than the eagles and of course they’re after the same fish. Consequently, it is just about impossible to get photos of the eagles without seagulls in the foreground, background or just about everywhere. They are definitely part of the eagle’s environment but are they so much of a distraction that they ruin the impact of the fighting eagles? Cloning is possible in some cases but more often than not it would be so complicated that it isn’t worth the effort (my opinion).

Excellent capture of the eagles, and very frustrating about the gulls. I think in this case you might be able to clone out the wading one. It is in a bad spot, so close to the edge. The one in flight doesn’t bother me so much, but if there was more canvas on the left it would feel a little less crowded.

Great interaction, beautifully captured !
I really like the poses and those tiny feathers flying.
As for the seagulls, you may go full open aperture, if you have a prime tele lens or alternatively you may tone down the seagulls by reducing the contrast selectively, since I’m not a fan of cloning.

I like the action captured here. Everything is crisp with respect to focus. The gulls are problematic. With exceptionally careful editing, you could probably remove them. But you may have more chances to get similar images. This always fun to see this.

The action with the eagles is really great. Super sharp and wonderful story of their behavior. The gulls are just a bummer. Yep, they are there for the same fish, but clearly don’t enhance this photo. The one is the water would be really easy to remove. The flying one would be a pain, doable, but a pain. I’d just create a really good selection of the eagles and make an inverted mask on a clone layer to remove the flying gull.

Ah… What the heck. Decided to see how hard it would be to remove the flying gull. Not bad with a good selection of the eagles to make a mask for a cloning layer.

PS. Your image did not have a color profile embedded so when I first opened in Photoshop, the colors were off. I used an sRGB profile to get them back. 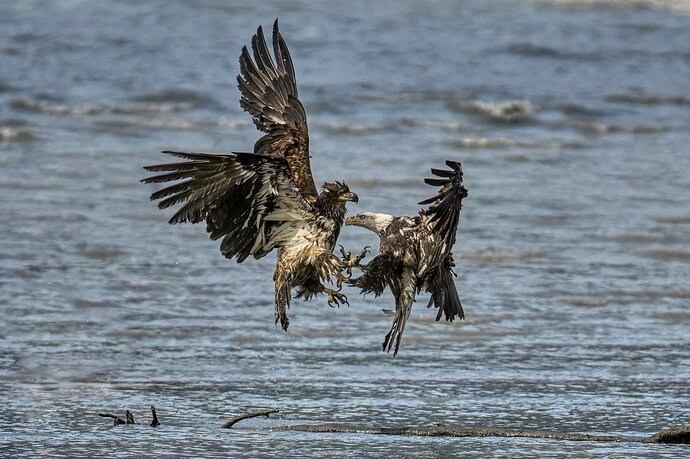 Excellent work, Keith! What did you use to make the selection?

I like the action here, Gary. The gulls are an interesting feature. I come at it from a different perspective. I like the flying gull. To me it’s saying “I don’t want any part of this squabble and I’m outta here.” I could certainly see removing the swimming gull as it’s location and pose don’t provide any feeling of interaction with the main characters.

What did you use to make the selection?

I used the Select Object Tool in Photoshop to select the eagles. Once that selection was made, I clicked on Select and Mask on the toolbar to refine the selection. Using the Refine Edge brush I just touched up the fine details on the edges of the feathers. I used that selection to create a mask on a blank layer used for cloning. Inverted the mask since the edges were the selection and I wanted the opposite.

I like the flying gull. To me it’s saying “I don’t want any part of this squabble and I’m outta here.”

That is certainly one perspective. When I try to decide if I need to remove something I look at it from the perspective of a painter and a blank canvas. Would I paint in a gull intersecting with the flying eagle to enhance the story? I might paint in a gull, but I sure wouldn’t have it intersect the eagles. Clearly we don’t get that choice while photographing, but it’s a way I try to look at parts of an image and decide to keep it or not.

May I add here,
when a painter starts, he starts with a blank canvas, where he places and positions all the subjects, very precisely and meticulously.
But when we photographers start, we start with a crowded frame

and we need to simplify.

Hi Gary
My very first viewing of a Bald Eagle was in Valdez, durning the salmon run. To me this is an environmental photograph and the gulls are part of the story. They are there for the fish and will only get out of dodge, when it comes to a fight. You have a top 10 bucket Lish photograph here, nice work.
Peter

Well done with this composition. Either with or without gulls look fine by me. Removing the gulls cleaned up the comp and provided more attention on the 2 eagles. An awesome shot…Jim