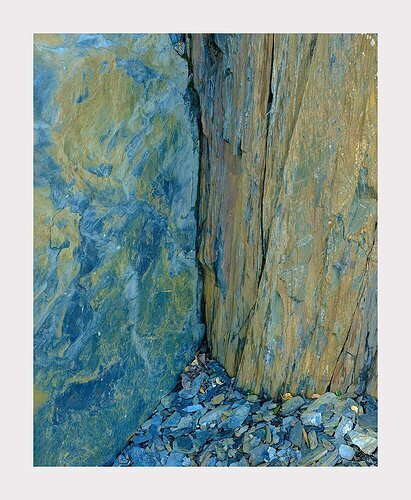 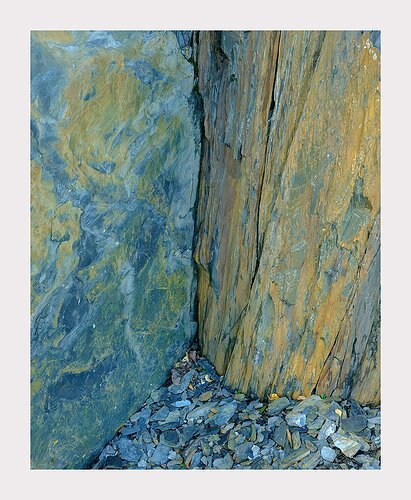 I decided to process this one in the style of the Fauvists. They were an interesting school of art that preceded the Abstractionists. Color was what they were after. They painted ordinary scenes in wild colors with no attempt to represent reality. They expressed their emotions through colors. The reception from the critics in France was as you may have expected - outrage. One critic dubbed them Fauvists, ‘the beasts’, for their misrepresentation of reality. The painters liked this so much that they began to call their group by that name.

I chose to treat this intimate with these wild colors because their real colors did not go far enough. None of the colors have been manufactured. They have been exaggerated and an overall color cast was added.

What do you think?

Igor, it’s amazing to me. What color can do in this style.

Did I recall you saying all these recent images are from the same rock pile? Amazing finds and images though, regardless.

Love this image, love this simple arrangement, a trifecta of sorts. Two unique walls with their own characteristics along with the bottom collection area containing all the colors and pieces from above.

Speaking of colors - I don’t find these colors as outlandish or having gone too far. In fact, I would say the colors are quite natural and believable. The only hint they might not be, would be one or two the little green leaves. There’s the one in the crack that stands out; pretty green and almost out of place. Not a huge deal, but an observation.

The visual contrast between the two sides dividided by the crack are fascinating; such diverse geology and abstractness between the two. The left side most certainly like an abstract painting. The wall on the right more geological representation. But it is the orange that ties them both together and then all the colors together gathering at the bottom.

The only suggestion I have would be a slight crop from the top. The URC and maybe the darker piece along the top right of the crack, could work as an alternate. There is such distance between the top of the frame and the bottom where all the elements converge, that I find myself looking up and down before settling down on the lower half of the image. Not a biggie.

Thanks for the tidbits on the Fauvists. I’m not so well schooled so thanks for sharing that knowledge! Very, very interesting indeed.

Wonderful image and I love the colors throughout.

The only suggestion I have would be a slight crop from the top.

I have had similar thoughts during processing. However, what keeps me from doing that is the large yellow mass on the upper left side. It might be the most distinctive element in the whole image and I don’t want to cut into it or have it touching the frame. Would you agree? In fact, that yellow mass is intended to provide a balance for the elongated composition in its absence. I also think it keeps the right side from being overly dominant.

I do agree actually and forgot about mentioning that circular shape as part of abstract painting side. I agree it’s an important part of the balance. So I turned my comment in to “edge cleanup” more than anything. Cropped ever so slightly from the top, CA-clone the URC and then color-burned the brighter area above the yellow/orange patch. Minor tweeks. If anything getting rid of the little triangle and lichen spots in the URC was what Iwas after. Nitpicky. 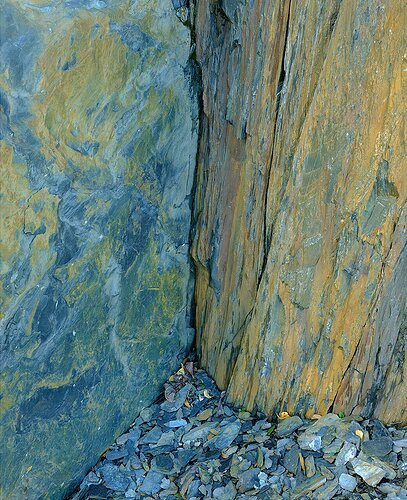 Another terrific abstract, Igor. The colors don’t scream outlandish at all to me. In fact, the shale crumbles at the bottom of the image look rather representative of natural looking shale in coloration. Maybe the bluish green tones on the left hand slab have been pushed but I wouldn’t say outlandishly so. I like the color palette of this arrangement quite a lot. What I really like though is stark differences between the left and the right sides in texture, geometry, and color. The left side has no real discernable cracks. It’s almost like that wall has been polished by a swirling machine. There re fissures but nothing I would call a crack like you see on the other side. Patterns are swirling and very random. The colors are blue green and yellow. The right side of the image has very pronounced cracks all running vertically and looks like a completely different rock slab in texture, and geometry. The colors are similar but still quite different. The right side also appears to curving while the left side is very flat as as you can see by the bottom edges of these two rock walls. The right side looks like a telephone pole with wild colors. and a wood like bark texture. The shale gathered around the bottom is more reminiscent in color of the left side of the image. It has a ore blue tone than either the of the two sides of the wall. There is one area that grabs my attention and that is the dark area at the very bottom of the image about 1/4 of the way in from the left. I would dodge that just a little bit. I also notice the rock chip in the URC but I don’t think it pulls the eye enough to warrant fixing. I would also tone down the greens in the leaves that are alive and poking up around the base of the right wall. It’s probably an optical illusion but the image appears to be tilting a little bit to the right. Terrific image all the way around.

It’s probably an optical illusion but the image appears to be tilting a little bit to the right.

Here is my rework based upon this observation. Since this was shot downwards I thought a warp would be beneficial. However, it made the pebble area at the bottom look larger and that was totally wrong for the comp. In a way I like this rework a bit more except that now the hole is touching the side of the frame. I remember framing this image carefully to deal with that hole and not have it cut or touching the frame. So, I feel as though I’ve gained something and lost something. Is the gain greater than the loss.? 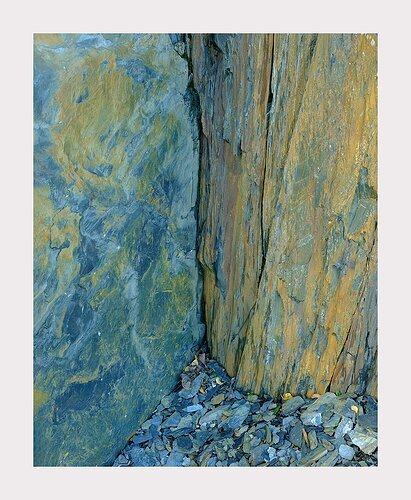 From my own simple point of view, Igor, I am really enjoying this just as it is. It has a wonderful painterly quality to it and the three distinct areas all compliment each other very nicely. Of course the colors could be more saturated/vibrant but I prefer the muted softer palette as it is more smoothing, at least for me, IMHO.

It has a wonderful painterly quality to it and the three distinct areas all compliment each other very nicely.

Thank you Linda. It was both composed and processed to have a painterly quality. I originally was attracted to the 2 ‘columns’ due to their contrasting colors and textures. However, try as I might I couldn’t come up with a satisfying composition without getting that head bobbing result of going back and forth between two pictures. So I added the stones at the bottom. The composition is still too simple for my taste but I think the rework helps somewhat. I’m actually surprised to hear that these colors are muted.

@David_Haynes I have been looking at my rework and I quite like it. I noticed in the rework that the ‘column’ on the left is wider on the bottom and narrower on the top. The right one is narrower on the bottom and wider on the top. The image is now more dynamic and yet stable because the two counterbalance one another. It’s a small change but one that definitely makes a difference. I hadn’t even noticed that there was a perceptive lean to the image. Thank you for the observation.

Must confuse, Igor, I think I am closer to cataract eye surgery than I would like to admit.

Luminosity, I have come to discover from readings, is not a measure of only light. It’s a measure of perceived light. And some colors are perceived more strongly than others even though their reflective light is the same. The rods in the retina absorb more light of certain wavelengths than others even though the intensity of light is the same. It turns out that we are very sensitive to yellow/red and much les sensitive to blues. To my mind that seemed to apply to this image. I therefore reduced the brightest yellows in the rework and raised the saturation of the blues. It seems to be an improvement.

A new and interesting discovery I made about this image:

Color intensity is largely perceived by the color that’s around it. The intensity of yellow varies with whether it is next to another color or by itself. In this image the yellows are more vibrant than they would be on their own because they’re next to the blue. Presumably the blue is also gaining intensity from the yellow. I believe that the post impressionists understood this and composed paintings using these principles of vision.

I have been away for a couple of months, Igor and just now trying to catch up. Would that I had the time to comment on all the photographs you’ve posted over the past few months but it would be too overwhelming. I am absolutely blown away by the quality of your most recent work. It feels like you’ve somehow managed to kick it up another notch and that, my friend, is going some.
Since I’m here with this one, let me say, I absolutely love your Fauvist take. The image is compelling to say the least, because of the marvellous textures combined with the exquisite colour palette. Between the straightened one and the off-kilter one - I take the off-kilter without a doubt. You may not know this but Keith Carter said that when he is making a photograph, he composes and then just tilts the camera so it is a hair out of balance. For me, looking at the straightened one compared with the off-kilter one, provides a clear demonstration of why.

. You may not know this but Keith Carter said that when he is making a photograph, he composes and then just tilts the camera so it is a hair out of balance. For me, looking at the straightened one compared with t

That’s exactly what I did with this image.

I’m late enough here that all I really need to say is WOW! I LOVE this and how the bold colors work with the shapes, which, to me, read as an obvious rock formation – but – OK – WAY MORE than a rock! I wouldn’t change a thing – I love the variation in detail in the darks and, for me, the UL corner is a star field!

The crack in the yellow was composed to go up and down but even when I got everything set up I knew it was wrong. I rotated the camera without much consideration and just eyeballed this comp until it felt right.

Regarding my recent work. There are two reasons for the change. I’ve been watching a lot of video on post impressionist and modern art to music. I find it both relaxing and stimulating. And it all sank in. The second reason was that I came upon a landfall with fragments that were ideal for free interpretation. So I just started playing with shapes and colors with no intent to show reality. It was just an opportunity. Who knows when another one will present itself.