The Beauty That Lay Within the Beast 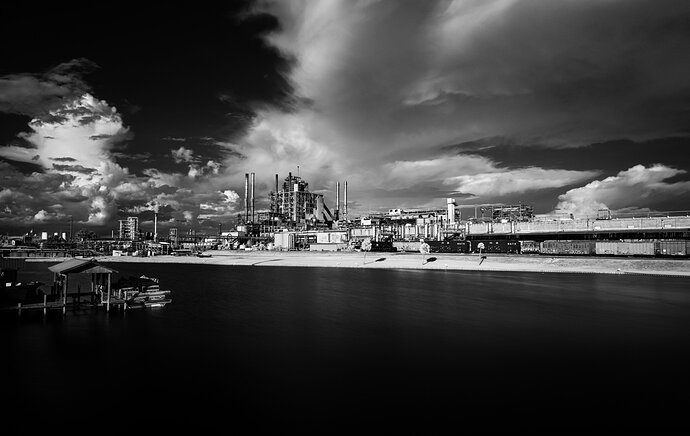 This is a shot made moments after they fired off the last roll of paper from this mill which had been in operation for 92 years.

I did a rather different process in developing this image. In ACR, I did the basic adjustments for contrast and highlights, but instead of going directly to PS and doing a channel swap, I used the Calibration adjustments to get to a reasonable B&W rendition, then used a High Contrast B&W preset and adjusted some of the densities with an adjustment brush. In PS, using the TK8 Orton Effect, I adjusted the effect down to around 2.8 on the blur and dinked with the contrast. I like this technique better than the channel swapping.

HI Chris, your processing certainly gave you a deep and rich result. Excellent. I think you could crop some off the bottom, but that is nitpicking. It’s an outstanding image. Well done. Thanks for the story too.

I can only imagine what will happen to this site now that it is out of commission. It’s a shame, really, but it is great you managed to capture this photograph before anything inevitably happens.

There are only two aspects which I do not care for with this composition. The first is the dock on the lefthand side. I feel as though it is a bit too bright and thereby distracting of the main subject, the primary building. This could easily be fixed with some dodging/burning and perhaps a bit of a vignette. I would also say about cloning out the two white elements on the boat against the left edge, as they are quite distracting; I would do the same for the three white pieces above the dock, left-side.

The other recommendation, though there is little you can do about it now lest you go back to this location, would be getting a bit higher of a vantage point. This would help to separate the dock’s roof from the land in the background, which I think would help the composition overall, even though it seems to be a bit menial.

As a whole, I think this is quite a nice piece, with a story which makes it that much better. Nice work.