The lunar eclipse I DID NOT shoot yesterday morning 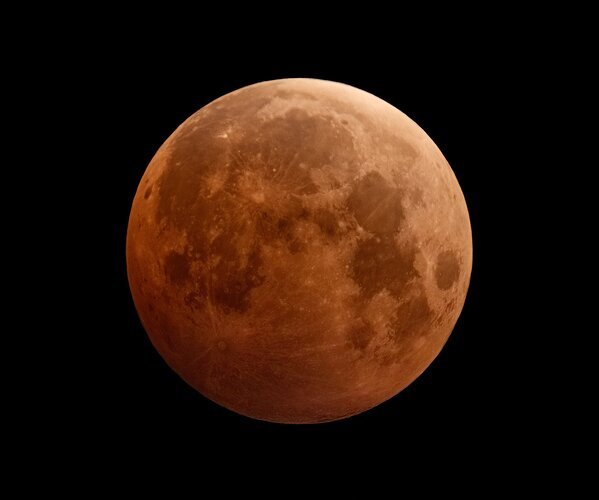 An enlargement of the raw file with minor adjustments: 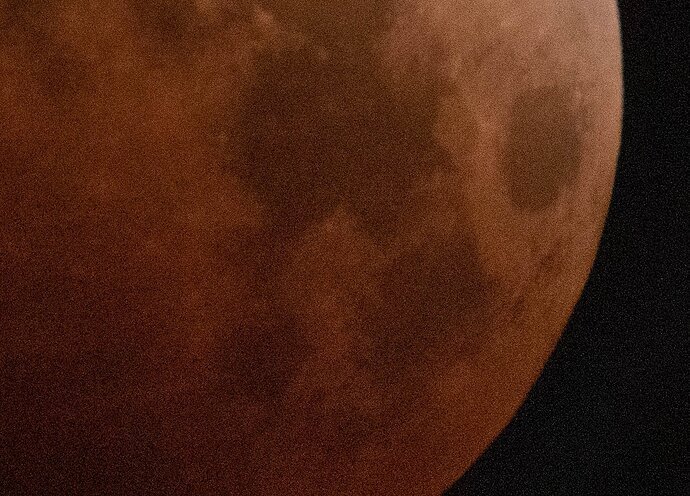 And with the best NR and sharpening even today: 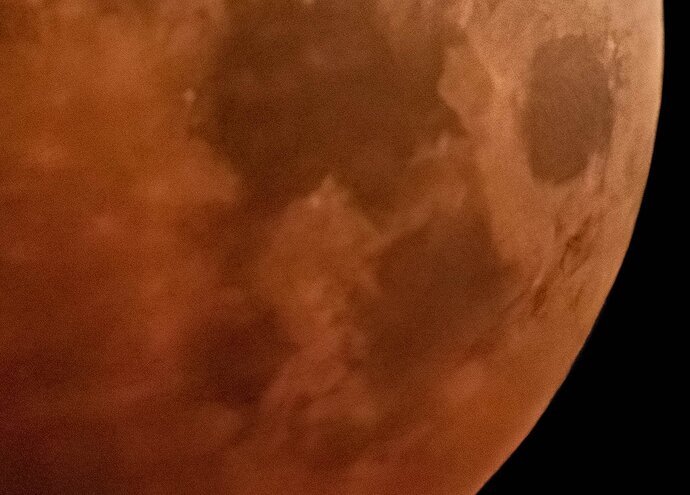 And the same detail of the improved file described below: 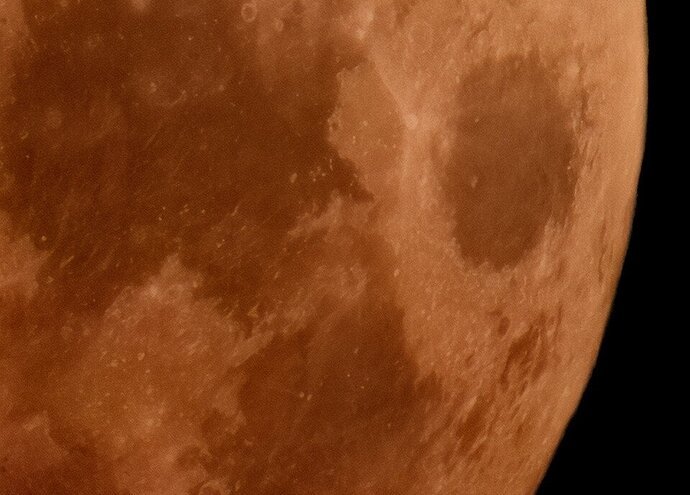 Since 2003, I have shot 9 total lunar eclipses with a range of gradually improving results. A few months ago I finally succumbed to replacing my tracker lost in our 2017 wildfire, and I was hoping to be able to shoot this last one with tracking, at a low ISO and long shutter speed. It was forecast to be raining here (and was) but my husband is into small planes and we were prepared to fly to someplace with a decent chance of clear skies, and it looked like that might be the case for southern CA-AZ (it was). But weather in between intervened, with several days of icing conditions over the Sierra. That would have meant leaving before a long-planned family birthday and maybe not getting back for a week, after the weather cleared. So I gave up on it. BUT there was a good side to it. My main objective was getting a better picture than I had before. So I figured out a way to significantly improve the LAST eclipse I shot, in May 2021. Details below.

How “authentic” is it? How different is it from the next generation of NR and sharpening?

All comments welcome, including on my sanity.

Up front, it is a composite exposure in a blending mode. The stages are posted above. The original raw file with minor tonal tweaks is above, at these settings. Yes, certifiably nuts, but that’s what it took to get it without a tracker. 600mm at f/4 could have given a lower ISO – not sure now why I didn’t also do that.

The best I could do with NR and sharpening is the second frame. Pathetic. BUT – I had shot the full moon two hours before, just as the very diffuse edge of the earth’s shadow began to creep across it. Without tracking I had to translate and rotate it tediously to match the eclipe frame. It was shot at 1/320 sec at ISO 100, and then I sharpened it judiciously and layered it over the total eclipse and put it in Soft Light mode.

I’ll have another chance to do it right in March of 2025. Weather permitting.

The amount of work you did is impressive, Diane. The outcome is really beautiful. Sorry your travel plans were spoiled by the storm, but am glad you stayed safe.
What tracker did you get?

Thanks, @Mark_Muller. I got the Skywatcher EQM-35 Pro. Dan Kearl has one and said it is quite good and the best bargain in its class. It’s load limit is 22 lb, but those limits are always worth cutting in half. He also has the heavier AZ-EQ-6 with double the payload capacity. (Don’t forget, the counterweight(s) are part of the payload.) He says the smaller one tracks just as well. There is a lengthy thread on CloudyNights about gear and other issues with them but fortunately mine is good to the limits I’ve been able to test it. I had the Orion Sirius before, and it was heavier (but don’t remember the payload limit.) I wanted a smallish one for portability and will probably never exceed the payload. And I don’t have time to get into DSOs like Dan has. As far as I can see now, I’ll use my Canon 100-500 (+ 1.4X or 2X as needed) and 17mm TS-E with the R5 and just have some fun. The 100-500 lens foot is cringeworthy as a mounting point, due to flex, but with the foot removed, two mounting rings for ZWO astro cameras fit it perfectly with felt shims and bolt onto an 8" Vixen plate. The mount comes with two 7 lb counterweights, which is really ridiculous and uses up the payload right there. One will balance my camera + lens at the closest point on the shaft. I’ll get a 3 lb and use it a little farther out on the shaft. The 7 lbs weights will make a nice curl bar!

Thanks for the details, Diane. You’ve got a great setup there! Like your fix with the mounting rings too.

You did pretty well, Diane. I had wind so my shots were not perfect. The first image is my favorite.

… hours before, just as the very diffuse edge of the earth’s shadow began to creep across it. Without tracking I had to translate and rotate it tediously to match the eclipe frame. It was shot at 1/320 sec at ISO 100, and then I sharpened it judiciously and layered it over the total eclipse and put it in Soft Light mode.I’ll have another chance to do it right in March of 2025. Weather permitting. 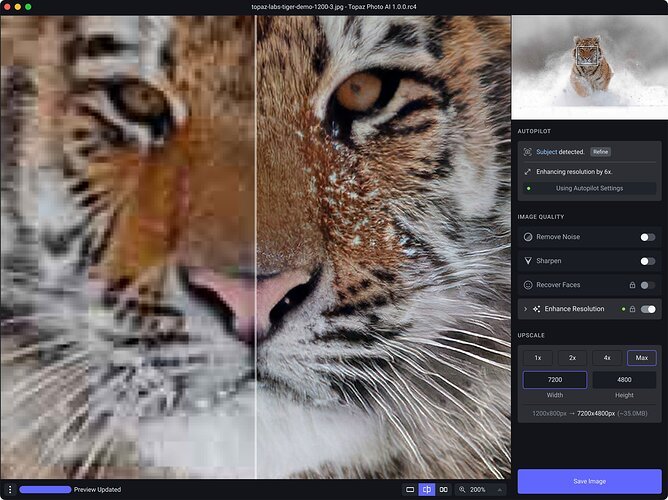 Photo and video enhancement software powered by deep learning gets you the best image quality available for noise reduction, sharpening, upscaling, and more.

I quite agree, @jaapv – I’ve been using both since Day One, and the recent improvements in Sharpen were critical for the final image here. I’ve had a look at some of the similar products from other companies, for both noise and sharpening, and have yet to find anything competitive.

I have rarely found any sort of sharpening to make more than a microscopic difference, but recently used the newest motion blur correction to make an amazing difference – with the caveat that it was an otherwise sharp image:

I’ve been very dismissive of how well an image can be sharpened beyond the pixel level. In my experience, a soft (poorly focused) image can only be given some slight appearance of being sharper with a high-frequency contrast boost with something like the Texture slider in recent versions of LR/ACR, or possibly the High Pass technique. But it appears that motion blur on an otherwise sharp image is easier to fix. This morning I was working on some pictures of our granddaughter and decided to t…

Huh… Neat trick Diane using the full moon for detail and layering. I will need to try that next time as well.

Thanks, @Youssef_Ismail! I was rather pleased with myself for figuring this out, although this was definitely a cobbled-together Plan B. I’ll be hoping for better luck with weather for the next total lunar eclipse in March 2025. Tracking would have made alignment much better/easier. Next time on that, too…