Thunderhead A.K.A. 'Armageddon' (Thanks Ed McGuirk) 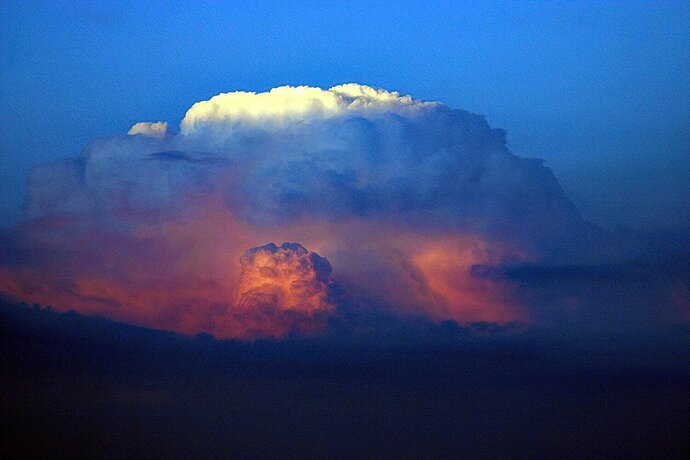 Looking east from my deck. I often wonder how close (or far) these storms are from me so, as soon as I captured this image I pulled the weather radar up on my computer. The only thunderstorms revealed on radar were in the vicinity of Joplin, Missouri - about 90 miles away.

Beautiful, Terry. Nice gradation of colors from orange to blue. The highlight on the top cloud adds an extra dimension, at least for me, like the clouds haven’t really decided if they are going to commit to an actual storm. Did you at least get some good rain out of the system? Nicely done.

Thanks, Linda. No rain out of this one for us. I think I’m glad; that’s an angry-looking cloud!

That is an amazing image, Terry. It reminds me of a nuclear bomb test.

That is what it reminded me of as well, Dennis.

Wow. Those are certainly some impressive looking clouds; almost looks like a nuclear detonation Terry. I only have a couple of suggestions. The red glow in the cloud formations is spectacular.The first is my personal taste, but I think the blues are a bit strong. The second is more noticeable when opening the large version, but it looks like the image could use some noise reduction. This had to be inspiring to witness first hand.

I would have titled this “Armageddon”, it does remind me of a nuclear bomb test. If that was 90 miles away, it is one seriously big thunderhead. Whats interesting about this is how the highlights are in two places, at the very top, and then the red formations below (with shadow in-between). I assume that’s natural light, and there must have been other clouds around that created gaps in the sky.

@Ed_Lowe Hi, Ed. You’re probably correct that the blues are a bit too blue. That tends to be one of my failings when I process photos like this. Unfortunately, I took this photo as a Jpeg when I first got into photography, so don’t have a RAW file to work with. I did run NR on the image before posting, but you’re again correct that it wasn’t enough. That, I should be able to adjust. Thanks!

@Ed_McGuirk I like that title, Ed! I think perhaps the highlight variations were due to the fact I shot this as it was approaching sunset, and the angle of the sun and whatever was between it and this storm influenced the way the light struck it. It is indeed, all natural light. Thanks!

Terry, this does look like a “classic” view of a prairie thunderstorm building. It’s a great view. Since the top is still rounded, it has not formed the “anvil” that signifies a violent storm, but it sure looks like it could get to that stage. It does look over saturated colorwise, especially in the blues and reds. Given the noise, I’m going to guess that this is an older Rebel, which says a lot about camera improvements over time.

…e storms are from me so, as soon as I captured this image I pulled the weather radar up on my computer. The only thunderstorms revealed on radar were in the vicinity of Joplin, Missouri - about 90 miles away.Specific Feedback RequestedAnyTechnical DetailsIs this a composite: NoCanon EOS Digital Rebel, f/4, 1/250 sec., ISO 400, Hand Held. I ran NR on the image in PSE 2020, then sharpened the image.

Wow! This is awesome, Terry! I love thunder heads and then to get the lightning lighting up the clouds is so dramatic! Great capture!

Thanks, Vanessa. I, too love thunderstorms , and try not to miss an opportunity to photograph one.