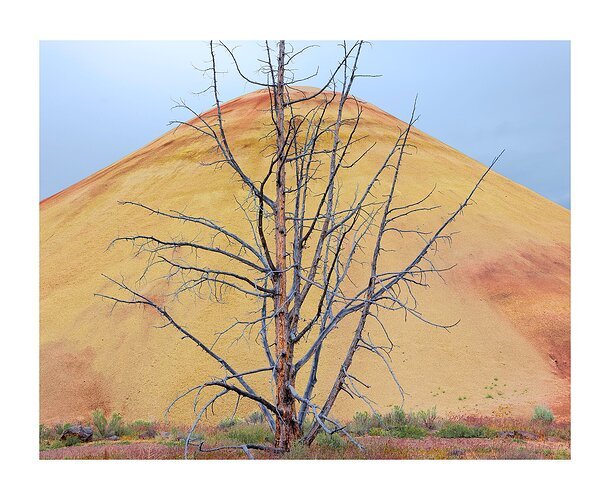 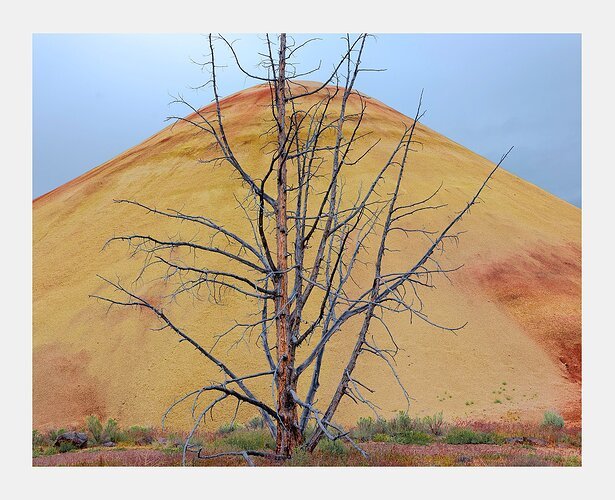 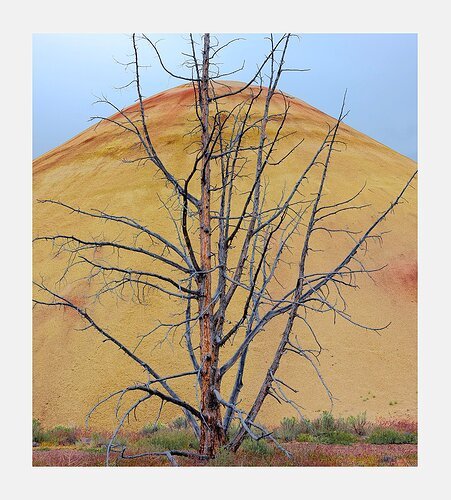 Yesterday I had a vision of these two subjects as a potentially strong composition. This was shot at the Painted Hills in Oregon but not in the area where most photographers make their shots. I had done all that before and was interested in exploring other aspects of these hills. It’s sort of an arty-farty image I guess but there’s a side of me that’s drawn to these types of compositions. It had been a rainy day and therefore the light was fairly flat yet luminous. Exposed to the right so the colors and luminosity had to all be recovered in Photoshop to the level I had witnessed the scene. That’s why I processed it the very next morning.

Even though the tree is dead this image conveys a great sense of vitality. Hopefully it does for you as well. Let me know what you think.

This is a unique take on the painted hills. I think the contrast (color, form and texture) between the tree skeleton and the background hills work well in the composition.

For me this image is as much about colour as form. Very strong. And a little different from your usual perspective for which I salute you.

Asa soon as I saw the thumbnail, I knew it was the Painted Hills, Igor. I have a couple of similar shots of that hill as the backdrop, but with different trees…and in harsher light.

I like the soft light here and the tree cut off at the top helps to anchor the overall scene. The centered subject still offers a lot of dynamic feel to it. Nicely seen.

I need to get myself out there again soon.

I have a couple of similar shots of that hill as the backdrop, but with different trees

Oh good. I didn’t think many people would recognize it due to it’s isolation. It’s isolation actually caused some problems for me later on. After I made this shot and a few others I went back to the car to warm up and during the process I somehow drained the car battery. So when I decided to head back home at 5:30pm … click… click… no start. I ended up waiting 2 hours before someone came by. I was planning to spend the night there by then. Then I saw an enormous white RV snaking up the road from below and knew I would be ‘rescued’. But I it was a fun day. I felt elated (and hungry) driving back to Bend that night.

Yikes, not much around there to help with a dead battery, Igor. The town of Mitchell is close, they have a gas station, hotel, and a couple of restaurants. Very small. Although they used to have a Grizzly Bear at the gas station. Apparently it was injured as a cub and they nursed it back to health.

Anyway, glad you made it out of there.

What is most impressive here is the “stepping out of the box” approach to the subject. As with all your images, the composition is thoughtful and has purpose. The centered/symmetry is obvious, but what strikes me is how the random, chaotic nature of the old snag works harmoniously with the static hill and sky to give the image that extra edge that elevates this beyond the usual. Well done.

Not sure if it’s cropped or captured, but wondering if there’s a little more room at the bottom. Just a tiny bit of tension at the base of the tree and frame. Very minor.

The tree looks majestic with is upward reaching branches. The golden hill and blue sky serve a a wonderful backdrop accentuating the majesty of the dead tree.

You made a lot of great decisions to bring us this winner! Location, tripod position, framing, exposure, saturation … all worked together.
By arriving at Painted Hills after a rain, the soil colors were a lot more saturated than if they were dry.
The V-angled lower branches have an inverted symmetry with shape of the hill, which nicely attracts my eye. The line of low vegetation has an incredible mix of colors and fine textures … a little bonus.

Dick, one thing before I forget. You know those tiny yellow flowers that grow on these mounds? I’ve seen them in a Sierra Club image. They’re blooming right now. The bloom wont last much longer because the sunny weather is approaching. I know you like to photograph this area so you might want to take advantage of that.

Thanks for thinking of me. May is the month for chenactis and golden bee plant. One or both of them grow in the ditches where hills meet, providing a wonderful outline, especially in wet years.

In May the long time Ranger there hosted a photography weekend and took folks behind the hills … sorta cross country from the parking area. Not sure he or that event are in the picture now.

This photo was really compelling and grabbed me as I scrolled through recent posts. As others have noted the colour, luminosity and saturation as lovely. I had never heard of the painted hills (but have googled - w.o.w.) and so for me the first association for the hill was a mound of sulphur. And a dead tree. So immediately some tension that quickly resolves in the beauty of the landscape and colours (and so I agree with @Lon_Overacker that would be nice to have a little more foreground). I also wondered about trimming just a hair off the top because when I did this I found it accentuated the hill. A lovely image that made me stop and reflect.

I like the elements and the processing, but the comp is quite static. There’s not a lot to help the eye keep moving here. It’s an interesting juxtaposition of natural elements.

I would argue that compositions based on symmetry are static by nature. Not designed to be otherwise. The tree and hill would look off if they didn’t centrally align with one another and in the frame.

These two subjects certainly play nicely together. I love dead trees but this dead tree has so much vitality to it. It could be that it’s the, full of life colors of the hills behind it that give the tree so much life but it’s also the upward facing branches that seem to be reaching for the sky as if it’s the conductor directing an orchestra with such musical complexity that it has to use all of its arms to pull off this colorful, musical masterpiece.
What really makes this so immediately appealing is the inverse nature of the shape of the hill and the shape of the tree. A V and a reverse V. There are also so many triangles in this scene. You have the two blue sections of the sky, all of the triangles formed by the various branches and the shape of the tree itself, the shape of the hill itself and a triangle poking in on the right side of the frame on the hill. In fact, to balance that section of the hill with the left side of the hill you might want to consider burning the section of the hill just above the ground in the LLC OR, dodge the large triangle section on the right side of the frame. Very nice glow in the sky.

Thank you for your comments. They were greatly appreciated.

You were right about that. I modified the ride side to match the left.

I decided to print this today and during the process I came to the conclusion that it might look better just a bit brighter than I have had it so far. So here is yet another version. Oh yes, and I’ve decided that the space on both sides of the tree is necessary for this to be optimum so the horizontal is better than the vertical. 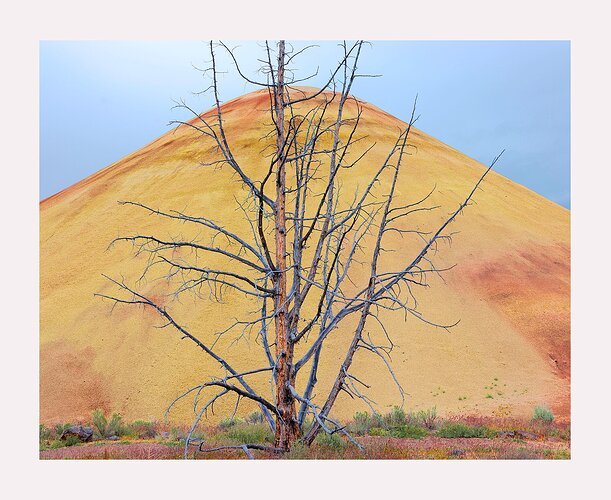 I prefer the landscape version. The portrait removes too much of the hill and the tree, particularly the tree. It has no breathing space. I like the adjustments that you made. This would look great printed large.

Yes Igor I prefer the horizontal final version best as well. It is an interesting composition with the juxtaposition of the smooth sinusoidal line of the hill with the jagged snarled branches of the tree.