This is a frog species that I have been hoping to see and photograph for a long time. I finally did it a couple of months ago. It is a Waxy monkey tree frog (Phyllomedusa sauvagii).
In the first picture, I used a flash in a softbox on the left and in the second I added a rim light (a second flash on the back with no diffusion).

Those are two different frogs on different trees, in both cases, I did not move or touch the frogs. 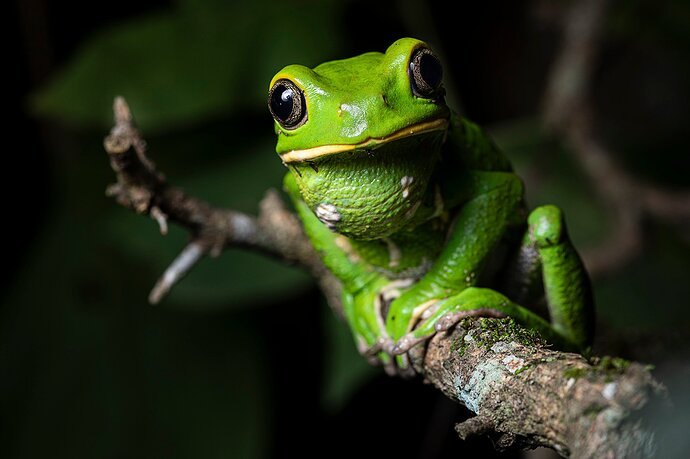 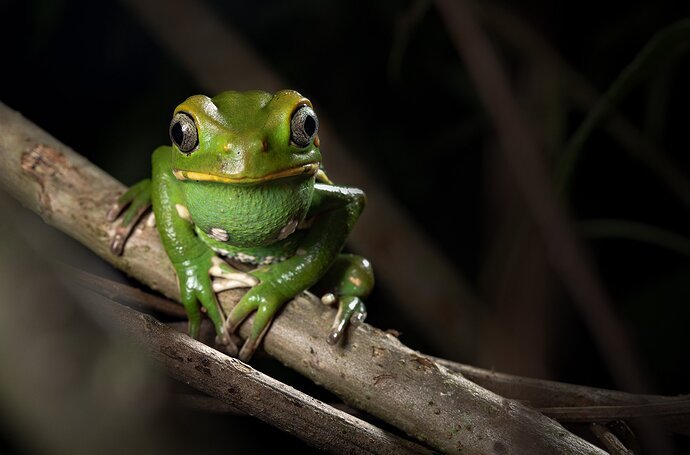 Very cool tree frog! I prefer the lighting in your first shot over the second. The shadows and soft lighting work very well. The rim light adds a sense of the scene being artificial with the edge highlights. Perhaps diffusing it may change my impression on that type of lighting. Both are good photos, but I like frogs with soft highlights. One suggestion that I have for you is to get more DOF so that the frog’s feet are also in focus. That will add a lot of character to the photo. Tree frogs have those big toe pads and they do go with those wonderful eyes. Thank you for the post–it is wonderful to wake up on a Saturday morning and see a phyllomedusine frog…,Jim

Thanks for your comments @Jim_Zablotny, you are right about the feet! Thet are beatiful, I´ll try to show more of them next time. But I’ll have to wait at least until november!
Cheers!

It is always special to be able to photograph the species you want to !
I too prefer the first one and as mentioned by Jim, some more DOF to cover the feet would help, I like the play of light here but would like to control the light in such a way that branches at the back are not illuminated. The green color looks great
In the second image, second light is functioning as a side light too and the branch appears to be quite bright, it doesn’t give the feel of a natural light.

Juan, this is a fine look at this small frog. I too prefer the lighting and comp. of the first post. It’s pretty amazing how much color difference there is between the two shots. The details in it’s eyes are terrific.

Thanks, @JRajput and @Mark_Seaver for your comments.
I agree about the background, I actually darken it a bit in post. These frogs like to hang out on tree branches (obviously, that why are called tree frogs), in some cases the trees are not very dense, like in the first photo that was actually the first frog we found. What I’m trying to say is that it can be tricky to avoid lighting in other branches, but certainly the first frog was the more suitable for that. The only thing I can think to do it is to put the flash higher and maybe add a reflector on the bottom if needed…

I don’t remember noticing a color difference in the files, the only thing I can think that might cause it is that the second frog was in a very dense brush, so probably the flash light bounced in the leaves a lot. I just check and White balances is the same in both images.

Thanks so much for your comments, I can’t wait to go again to put in practice your recommendations!