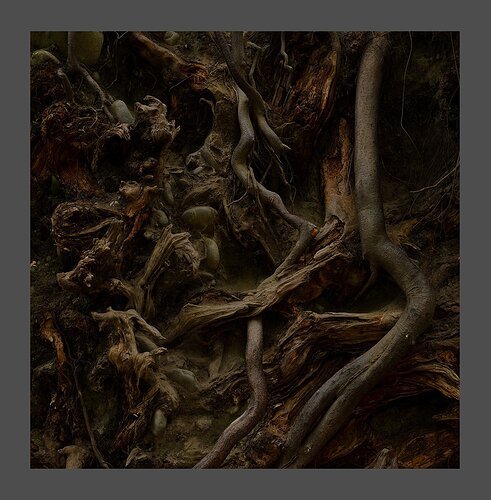 What is this image about?
How does this image make you feel?
How well does it say it?
How could it say better what it is saying?

Igor, your work is more and more a form of art. Not just branches, but well chosen forms. To me with a story of flee out of darkness. Very special work.

I se the major vertical lines (roots?) surviving out of chaos and darkness. Initially I though the image needed more contrast, but now I think the tonality is spot on for my interpretation.

Torment. Fire and Brimstone, demons attacking the unfortunates. The more I look at it the more i don’t want to.

At first foreboding and gloom, then the warm colours and soft light lead to a more contemplative mood…peaceful.

I find this one of your most powerful images, dark, evil and foreboding. I almost expect to see skulls and bones when I zoom in.

This is a really cool subject and image, Igor! I love the mood you’ve imparted with the dark treatment and the warmer color palette. @andronik hit the nail on the head, it is reminiscent of Dante’s Inferno type imagery for me. You’ve also made some sense out of chaos with the composition, something that can be difficult to do. I only have two main critiques with this one.

First, and most importantly: I feel the relatively straight, clean branch that dominates the right side is a bit problematic for the composition. The fact that the top half of it is almost perfectly vertical (and relatively near the right edge, which draws more attention to its straightness) is a bit jarring for me, given that everything else in the frame is gnarled, twisted, and chaotic. I also see that everything to the left of the branch is visually dense and quite interesting, whereas it’s fairly empty on the right. So I just feel it would be best to focus the composition to the left, with a vertical 4:5 crop starting from the upper left corner. This would necessitate a vignette on the right and bottom edges after the crop.

The second thing is that the white point is quite low, and nothing but a few specks reach past about 200 out of 255 on the RGB histogram. I recognize that the intent is to present a dark image, but I think this one requires the viewing device to be jacked up to maximum brightness to avoid squinting to appreciate details. I don’t think the histogram should be a “proper” bell shape, but moving the white point over to around 205-225 on a Levels layer really makes it a lot easier to see without destroying the dark atmosphere, in my opinion.

More in the realm of nitpicking, there are some tiny bright spots throughout the frame, most notably the small conifer needles along the center-left edge, that I would either clone out or darken significantly. I’ve done all of the above suggestions in the attached sample.

I hope this is helpful! 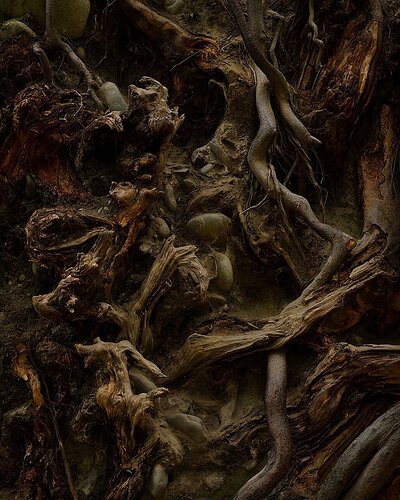 Given the reactions so for - and your pre-emptive no-title presentation, all point to the same place - one of speechless silence. Words to pick out won’t do this justice, but we do so just to sound responsive… I don’t even know what I’m saying.

I will say, my simple mind’s first reaction was looking for Gollum, Smeagol making haste on a fish as he plots to acquire the ring… Left to our imagination, there could be much more lurking here. I have to stop looking for fear of what I might find.

Perhaps your finest ever. And with that I think Alex’s suggestions are paramount. Most times, (like with the spider webs and such in your previous image) you can “play it as it lies.” But here I would carefully, nitpicky-like remove some of the very tiny bright specs here and there. This is that good it needs that level of attention.

I’ll have to look again, and again - but only spending a few seconds at a time.

I probably should give some time to Alex’s modification. I completely agree with point 2. The image is too dark even for viewing on the monitor. However, I have reservations about point 1. You see, I always saw this as a headless man running to the the right and struggling against a wall. Now the wall is gone and the man is running out of the picture. The man is the main point of focus in this image and with him at the edge it starts to look chaotic. But, perhaps more importantly, we have replaced a line going up and down with another line that goes up and down. So what has been achieved from that perspective.

Well, a lot of composition comes from interpretation. If you don’t relate that root to a man (which I have now done so for 10 months) then the crop makes a more sense. The criticism of the right past the root being empty makes a lot of sense. I believe I even dodged things a bit to give it more variation. Perhaps it needs more, particularly in the urc area.

@Alex_Noriega, thanks for taking the time to look at this. I know how much effort it takes to think and change an image.

@Igor_Doncov, I’m happy you’re at least giving it some thought! Indeed, specific compositional choices can be tied to personal interpretation, and I certainly interpreted the image differently than you did in your mind. Very interesting stuff either way you see it!

I also noticed that the crop replaced one vertical line with another, but I think with the crop the new line/branch feels more like a framing element, enveloping and cradling the rest of the image, rather than a jarring separator. It’s also less clean/homogenous and has some interesting details, and I darkened it quite a bit to lessen its impact. One more thing about the crop is that some of the brighter elements (roughly running along the left and right vertical thirds) form a new, almost-symmetrical “diamond” shape in the image. This feels “cozy” to me visually, a “home” area my eyes can rest in and return to as they venture out and explore the details, rather than feeling continually distracted by the “wall” and emptiness on the right from before. But I know that could just be subjective and tied to my personal preferences, as I have an affinity for symmetry and natural frames.

I much prefer the original over Alex’s revision. I really like the original composition with the long root and the darker, foreboding tones. The revision loses a lot of the impact for me.

Wow, what a powerful image! Looking at it just fills me with dread and hopelessness. Really well done Igor.

Wow, what a powerful image! Looking at it just fills me with dread and hopelessness

Funnies aside, I do think it was the best image I took last year. It may need more work on my part but the basis is there.

Did you present this one before? Or maybe one like it? I seem to recall it.

I’m partial to your original crop. I see Alex’s point about that right-hand branch, but there is a certain rhythm to this based on sizes + amount of the various branches. They are smallish on the left, gradually getting larger to the right. Perhaps if you could bring out more detail in the URC (and to a lesser degree in the LRC) the vertical branch would appear less prominent (ok, re-reading I see you already tried that - ha).

This feels “cozy” to me visually, a “home” area my eyes can rest in and return to as they venture out and explore the details, rather than feeling continually distracted by the “wall” and emptiness on the right from before.

This is an interesting comment. I would not associate the words “cozy” and “home” with this photo, although I think @Alex_Noriega is using them as metaphors for a visual resting place, not the image’s mood. As everyone commented, it is dark and foreboding, sinister even. Should there be a nice resting place for our eyes in a disturbing image? Should it be well balanced and comfy? I would say no, if the intent is to convey disturbing ideas.

Should there be a nice resting place for our eyes in a disturbing image? Should it be well balanced and comfy? I would say no, if the intent is to convey disturbing ideas.

The intent, as with most of my work, is to evoke strong emotions. If that happens then I feel I’ve succeeded. Composition is of secondary importance. I can’t believe I wrote that.

Composition is of secondary importance. I can’t believe I wrote that.

I would say that following compositional “rules” is less important. You’re still going to make compositional decisions that reflect your message.

Reminds me of the Creation of the World by Hieronymous Bosch (https://www.hieronymus-bosch.org/Creation-Of-The-World.html), Igor. Fascinating to look at and very creative.

The intent, as with most of my work, is to evoke strong emotions.

Well this does that in spades. It’s gnarled and dark; twisted. Excellent choice to go with a darker frame.