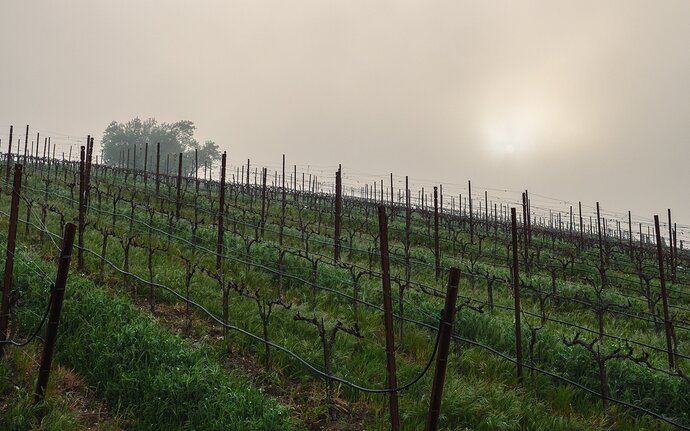 Last week hubby and I took our first vacation together in a year. We went to Paso Robles to visit w/our wine peeps and taste what was coming our way. One of the wineries has a guest house on property and we stayed there for a few days. Every morning was different, but the foggy one made me go out between cups of coffee.

I didn’t want to venture into the vines too much even though I could have easily. Partly respect for the cultivation and partly because it was super wet and I didn’t want to drench my shoes. This shot is from the driveway below the cottage. The sun was just breaking through the fog that comes in from the Pacific though Templeton Gap. The leaves have begun emerging on the top and the other side of the hill, but not here. Paso is full of micro-climates like this. Part of what makes the wine so exciting and variable.

It’s a modern working vineyard and so not so ‘picturesque’ as some. Is the industrialized character off-putting?

Lr processed to tame unruly highlights, crop some sky and add texture & clarity. Graduated filter on FG to bring up shadows. Color grading for highlights & mids to warm things a bit. Ps to remove a bit of white apparatus used for something in growing.

Kriss, I like the perspective of the image. Diagonals leading me to the tree are strong. I think the comp is balanced well by the sun also. I couls also see this without the sun and negative space in that area. Both would work in my opinion. Nice image!

I like the composition here. It’s interesting to have a sloping horizon like this, I think it accentuates the vineyard stakes, and adds more of a sense of depth. The tree also plays a nice supporting role, the image would be weaker without it. The processing looks spot on to me, slightly cooler greens in the land, and just enough warmth in the fog/sky. My only nitpick is the stake that is really close to the left frame edge, I just wish there was slightly more breathing room to the left.

Yeah, the vine stakes were tough to manage - cut one off and another intrudes. They were close together so nothing was isolated.

I certainly am not put off by it, Kristen as I think it tells a wonderful story. The fog certainly created some nice atmospherics as well as taming the bright sun and the diagonals created with the rows of poles and grapevines is a nice touch IMO. I agree with @Ed_McGuirk about the tree being essential to this image. Sounds as though you both had a great time.

Hmmm. It’s an interesting idea and image. At first I thought that it would be better if all the stakes were up and down but I think the diagonals add to it. I would try slightly underexposing the field and reducing the saturation in the greens.