I have been on-line with Adobe support. They told me it was due to my secondary video card no longer being supported. Yet after disabling the card and I still get the problem. I also find that it doesn’t matter really if the card is disabled, enabled, or active in the preferences or not. There is no consistency. At this point I am just putting up with having to reboot every couple of hours, and have the card enabled both in control panel and LR preferences, I get better performance and a bit longer stretch between crashes. If all else fails I might have to downgrade to the 2021 version.

I have had different issues with Lightroom with the v.11 release. Some photos were not found, but it wasn’t consistent. Some had previews and could even be edited, but the error would arise when I tried exporting to my jpeg folders. Others just had blank previews. It wasn’t whole folders that were not found, but just some photos within the folder. A total system restart set it right, but I had a few bad moments there.

My Lenovo is about 3 years old and handling the new software fairly well, but I cringe with every new update that I’ll have to get something new.

As far as the Mask Overlay goes, this is my set up now - 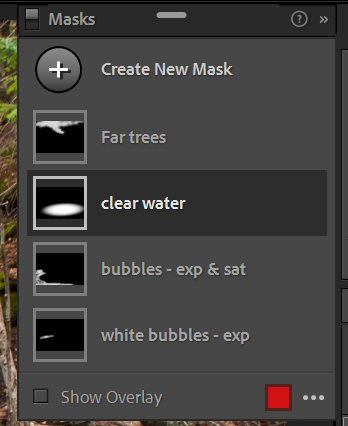 It’s turned off by default and appears when I mouse over the square in the mask list or if I mouse over the tool pin icon on the photo itself. If it is present when I first set a mask like a linear or radial gradient, the second I start working it on the photo, it disappears. I like it like this since I don’t always need to see where I’m applying an edit, but the edit itself. Maybe try this and it will suit you better. I haven’t seen it turn on or off under any other circumstances.

Neither of those performance issues. V11 did force an operating system upgrade to Monterey. In doing so, I found my export folder locations (structured under Macontoish HD) were moved in the new OS. So I’m having to redo all of them. It really makes me wonder why LR won’t let us change the export location of Publish Service Folders.

It really makes me wonder why LR won’t let us change the export location of Publish Service Folders.

This has always bugged me although admittedly I’ve only had to change it once. I use it for my back up hard drive which became too small recently. Very weird that I had to create a new one.

@Kris_Smith
My Lenovo is from 2015 but I upgraded the RAM, Hdd to an SSD, and O/S to Win X.
@Kris_Smith @Brian_W_Downs
The last thing Tech support told me was that the engineers were working on a known issue with xmp files and that it would be fixed on the next update. He didn’t elaborate beyond that. I did find the switch to turn off the problem with the mask overlay.

@Kris_Smith @Brian_W_Downs
I got updated to 11.0.1 last Thursday 11/18/21. It seems to have resolved my crashes. I was about ready to have them revert me back to the 2021 version. Hopefully it resolves others issues.

I’ll have to update and see if it eliminates mine - I had the File not supported or Damaged error again today and had to restart everything in order to get rid of it. Annoying. Hope I can do it here rather than the library since our internet is pretty limited. Especially with people home for the holiday.

It didn’t take long. probably less than 20% of the time the 2022 update took. But I’m in a Starbucks with a good connection. So maybe do an over-nighter. Good luck.