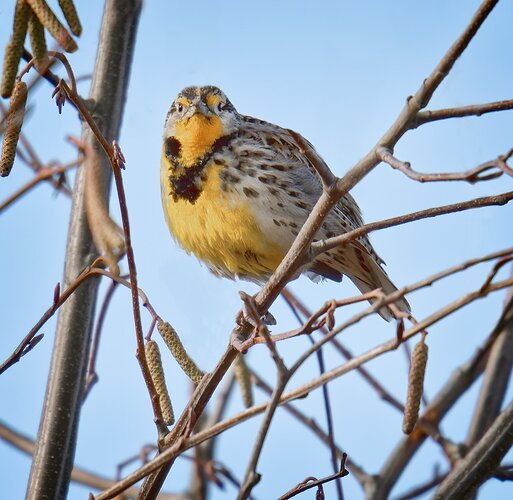 The Western Meadowlark is one of my favorite species at our local wildlife refuge. It is rather allusive and when it is visible, most of the time it hides in the brush. Rumor had it there were four of them at the refuge so I decided to go looking for them. Indeed, I found them but in very difficult conditions for photography. I had previously seen these on some large snags but yesterday when I found them, they were really in the brush.

The first image is highly cloned just so one could get a look at the bird. First image shot at iso-800 and the bird was within 50 feet of the camera.
The other two images were taken between iso-1600 and 2000 and the bird was at least hundred 50 feet or more away from me. These are very large crops, around 15% of full frame for the second two images. So there is going to be a little noise in image quality issue.
But this is an environmental series.

It’s going to be snowing here for the next three or four days; it’s doing that right now, so I won’t be able to get out for about a week. 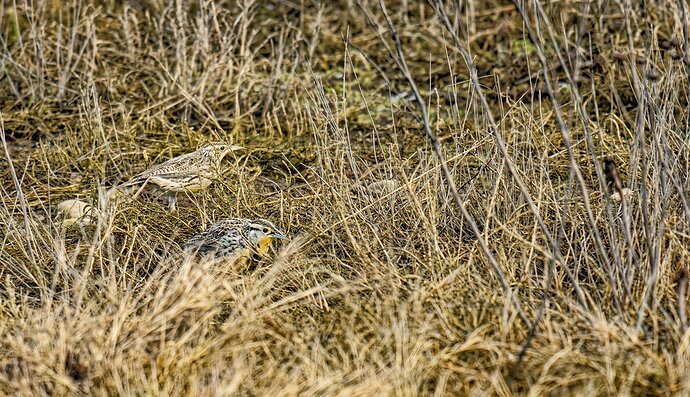 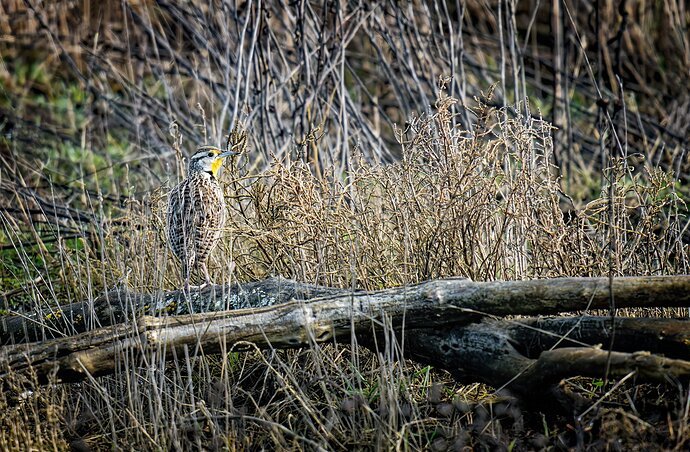 Good for you David. We have them here also in very similar settings. Extremely hard to get close to or have them come close. Often you can hear them singing or calling. It looks like the third image might tolerate a vertical crop and a bit off top left. A very nice winter series.

Interesting behavior in the first image, David. You rarely see them up in the brush like that unless they’re singing, then they usually find a slightly open area to do it. I think my favorite is the third one-I just like the composition. The first one doesn’t really seem to support the large crop, where in the third, the bird is small enough in the frame that a bit of lack of detail doesn’t really show.

Nice job finding all of them.

PS. I like having some snow for shooting from my blind-it tends to bring in birds that I don’t normally get like the Varied Thrush. Plus it adds some interesting backgrounds (and I have a heater for my blind).

It’s a reminder that I’ve had to keep in mind several times on this forum that populations of bird species vary greatly in different areas. What’s an easy bird for some are coveted by others. We get both the Western and Eastern varieties in my area and they are often in the open. I’m liking the third shot the best too.

The first is very interesting for the pose, and quite nice for the large crop.