Well I have been off the forum for a while and I sure as hell miss being around and benefiting from all the discussions.

Diving right in, white balance.
What is your workflow? How much creative license do you take? Do you have boundaries? If yes, what are they?

By the end of last year i came across a couple of videos on YouTube by Alex Nail (a UK based photographer) where he explains his process which is basically to set the camera white balance to Daylight to make it more of an objective view into how the light was acting during the capture of the shot, then depending on how much contrast he adds he adjusts to get rid of glaring casts.

I find myself still struggling with deciding on a good WB.

I know there is much of it left to taste, however i thought by asking i could learn from your process.

Well, use Capture one to get the right balance for one thing. Adobe is terrible at it…

Interesting i have never heard the divid between the two software suites regarding white balance.

I think about any program (Capture, Affinity, even Astro software like Pixinsight does a better job with White balance…
Get off the Adobe train and you will see.

Good question and totally subjective in some ways, but here goes.

If it isn’t important, I leave it on the closest WB setting to the conditions and leave it there or sometimes Auto WB if it’s doing a good job. If I feel the WB will be critical or if Auto isn’t working, I start in the field by looking at the scene and comparing it to what I see in the viewfinder and the back screen. Since they are both OLED screens (mirrorless) the result is sometimes different between the two and I choose which is closest to what the scene looks like. I start with one of the standard WB settings in the camera and adjust as necessary. I can get pretty precise with it in-camera.

This is helpful for times when I probably won’t recall accurately the particular shade or nuance of a color. Read most of the time. So it becomes important to me to get it as close to reality as possible to begin with; that way I don’t second guess myself. If it still doesn’t look right in editing software I’ll finesse it a little.

Rarely do I take a lot of license with color shots. Only if a big change suits the photo in a way that is better than reality. Sometimes I’ll go further if I want to create a moonlight effect or something similar, but it’s rare and I usually explain what I’ve done and why.

Black and white is different - often a change to the white balance changes the gray values of all the colors in the photo. That can really alter the mood, depth, tonal range and even the internal composition of the shot. I start there and then mess with everything else.

Boundaries are my own sensibilities with my intent and the natural environment I’m showing in the picture. If they don’t match, look fake, weird or just plain awful I don’t make big changes.

When shooting, I usually use 5600K. It’s not as important in anything other than night shots that are easier to control at 3500K. I have no difficulty managing wb in ARC / Lightroom because I use a calibration tool for almost every image. For example, it is almost impossible to get the color of the snow correctly without calibration 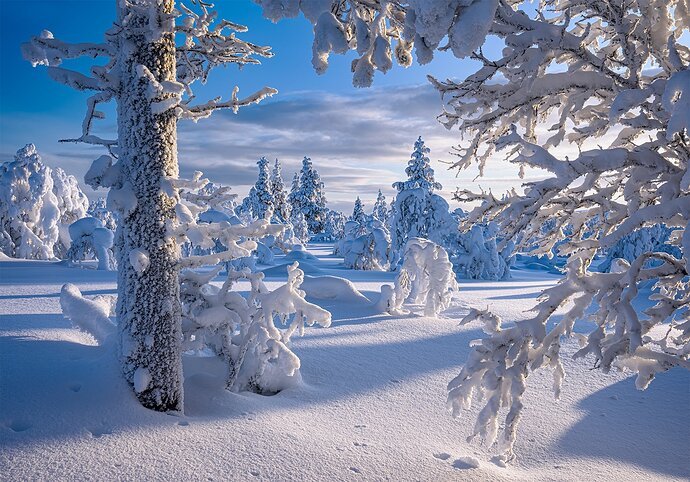 I think that most people are unaware that setting the WB in the camera has no effect on the RAW file. When you open the file in ACR it reads the camera data and sets the white balance that you set in the camera. Therefore you can set it to whatever value you want when shooting but it doesn’t get ‘actuated’ in RAW until it’s processed. The only value I see in being specific in the camera is to remind you what you wanted when you shot the image.

In my mind there are two kinds of image. The first are natural scenes and the second are artistic expressions or abstracts of the scene. For the second type of image I use the WB as a step in the color cast I want to give the image - either cool or warm. There are a number of ways to achieve this but WB is one of them. Even natural scenes require some WB decisions. Some people make fog look bluish and others choose to give it a warm cast. I would not fall into the trap of spending a lot of time making the image a faithful representation of the subject. Our minds compensate for colors we see in nature.

I find the Auto WB on my Nikon D850 (and D600 before it drowned) to be quite accurate so almost always use that. I then sometimes change it a bit in LR to achieve a warmer or cooler effect…sometimes differently in different parts of the photo.

I think people get too caught up on this in the field, which ends up taking away from the details that cannot be fixed in post. If I change it in the field, it’s ONLY to help me visualize a photo better in the moment. I know I am going to 100% change it in post to match how I process the image so why spend energy worrying about that in the field? Outside of journalism photography where you cannot make many edits, I don’t see why this should be a concern in the field in regards to the final product. If you have a rule that you go by that doesn’t allow you to change the white balance from what you got in the scene, then you’re limiting yourself creatively for some kind of “moral” code I guess. If that’s the case, might as well shoot in jpg.

In the end, I think it’s too easy today to get caught up on tiny tech stuff in the field that can actually take away from paying more attention to the scene, composition, sharpness, and exposure. If I can alter/correct in post, then I try to focus on the things I cannot fix if I mess up.

I decide on the WB for any given image by what looks good to me for the scene, on my calibrated monitor in my dimroom. If I’m concerned about accuracy, I’ll shoot a gray card in the same light as the subject (if possible) and sync that WB in the computer. (It needs to be a true neutral gray.)

Auto WB (in camera or in a raw converter) will vary with the colors in a scene, and can be way off. Shoot a red rose small in the frame surrounded by green foliage, then zoom in so the frame is mostly filled with the rose and you’ll get a different red.

I only shoot raw files and I shoot almost everything in Daylight WB so the files in a shoot are at least consistent, and that lets me adjust one frame and sync all the others to it. Then I can tweak individually as desired. Sometimes even a scene accurately balanced to a gray card doesn’t look right and in that case I have no problem adjusting it as I like.

WB seems to be one of those topics where individual photographers have widely differing opinions on the best way forward. I agree with @Igor_Doncov that it really doesn’t matter what you set the WB to in-camera (if you’re shooting raw). My approach is similar to @Diane_Miller in that my default WB is Cloudy … and I use that for everything except astrophotography where I’ll set the WB to 3400K. Having a default ‘neutral’ WB means I can batch process a group of photos when I’ve decided what I want my output WB to be in post-processing. As I always shoot in raw I have to post-process anyway so adding a WB step to that workflow is not a problem.

RAW files are unaffected by camera white balance settings. In Lightroom, WB can be set according to temperature in Kelvin units. If your camera profile has a neutral setting for Lightroom, then you can use that as a starting point for difficult situations. My Nikon’s get WB fairly close to ideal after loading the images in Lightroom. For aquarium photography, I use a white object to get a feel for how color biased the lighting is for shooting under LED lights. I can then batch correct white balance to provide the most ideal spectrum for the scene. Adjust white balance as one of your first steps in photo processing will provide a more reasonable approach to handling color casts in complex scenes…Jim