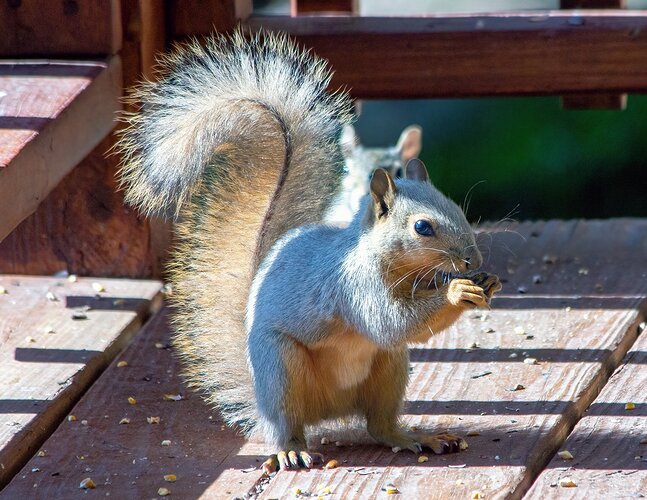 I just thought I would post what I think is a fun image. White eastern fox squirrels occur due to a condition called leucism. Unlike the mutation that causes albinism which prevents the production of melanin, leucism is caused by a decrease in several different types of pigments. Fox squirrels with leucism will not have pink or red eyes but may have patches of white or pale fur. This is the third white squirrel I’ve seen in my 20 years of living here.

Very cute little guy. I think his unique coloring would showcase better if you pulled the cyan/blue out of his shadowed fur?

Thanks, Vanessa. Yeah, I think my processing is off a bit because it looks somewhat gray in this post. But, you can see the red on his undersides. I’ll go back and look at my processing.

Very cute little guy. I think his unique coloring would showcase better if you pulled the cyan/blue out of his shadowed fur?

Is that what the problem is, Harley? Let me go back and check that and see what it does. Thanks 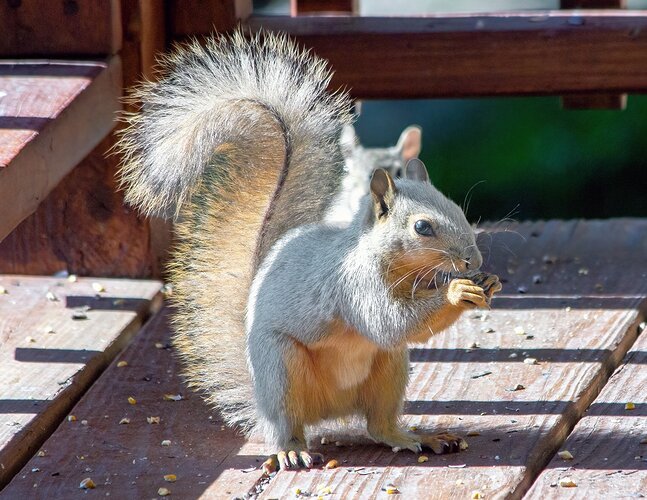 I think it looks better, Terry. Fox squirrels are so interesting. I’ve seen them in southern parts of the state and (weirdly) over in North Dakota, but not in northern Wisconsin. They seem to be a little larger than the standard grays (which we have and also in the black morph as well). I think the light back fur in your repost contrasts well with the golden underbelly. That little flip of tail is so great. Nice catch.

Thanks, Kris. Maybe still a bit blue/gray, but that was the best I could do. Fox squirrels around here, anyway are indeed larger than gray squirrels. The only time I’ve seen a black morph was on a trip to Washington, D.C. We went to visit Walter Reed Army Medical Center., and the grounds there are chock full of black squirrels. I liked that tail, too. That’s why I chose that photo to post, though I had to fight the shadows a bit on the squirrel.