A Piece of Heaven

I go to the Sierra for the towering peaks, but it is these alpine meadows that make every step on those switchbacks carrying a 40lbs pack worth it. This image continues the spirit of the image I posted last year here (" Treegarth of Orthanc"). I am hoping that I could turn this into a series one day.

As always, I appreciate your feedback, critiques, and comments about any aspects of the image. 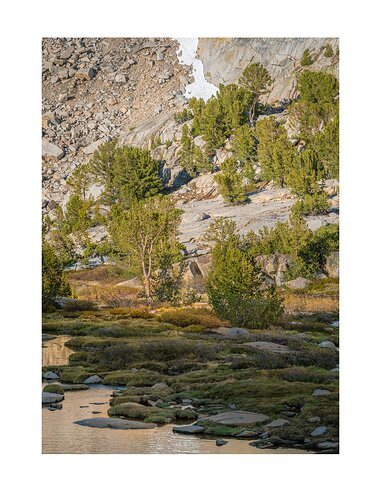 Revision based on @Bonnie_Lampley’s suggestion about the top part of the image. Also shifted the yellow slightly towards red: 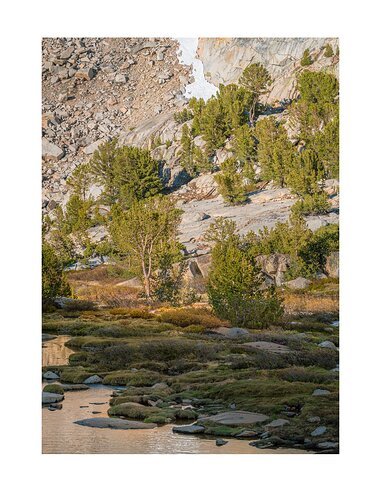 Adhika, as usual, you present us with an image that has beautiful light, and is expertly processed. This image for me is all about the light, and the contrast is the types of light between the top (strong light) and bottom (soft light) halves of the image. If each half was separated into two separate images, neither of them would be anything special. But put them together like you have, and you have got something meaningful. This study in light does a great job of conveying a strong sense of time of day, and that helps me engage with the image on a deeper level. I also like the patch of snow, it’s a nice touch.

Thanks, @Ed_McGuirk. That’s very kind of you. What do you think of the transition between the lit area and the area in the shadow? When I shot this, I was hoping that the sun would be lower in the horizon when the shadow gets to the threshold of the trees and thus create a softer transition between the light and dark areas. But there was a hill behind me and the shadow reached the trees quite early in the day. I “tweaked” the transition in post-processing for the look I am going for. I hope it doesn’t look forced or unnatural.

I also like the patch of snow, it’s a nice touch.

Oh, thank you! Two things that attracted me to the scene was the snow and the water. I am glad you feel the same.

What do you think of the transition between the lit area and the area in the shadow?

I like the transition as presented. I like that the two bottom trees are nearly fully lit. The transition zone at the top of the grasses looks natural to me. The relatively sharp transition kind of re-inforces the duality of the light here, and works for me.

Adhika,
While the grandeur of snow capped mountain peaks can make for stunning images, scenes like these are more subtle and the viewer has to slow down and really look at them to see the beauty they hold. I particularly like the bit of warm color reflected in the water along with the transition of light from the softer tones of the bottom to the stronger ones up top. This should go well with your series.

Wonderful scene. The light-dark transition looks realistic to me. The golden color of the water is super, and I love the snow patch. Really nice composition, with the three triangular areas of the rocky slope, the trees, and the water/flatland. The only question I have is about the rocks in the ULC and across the top. There is plenty of contrast, but the light tones in that area feel flat. Maybe brightening them up a bit? That’s really minor, though. This will be a great addition to your series.

Bonnnie, good observation. I did burn the highlights in the upper part as a way to create a bit of “vignette” towards the bottom area but I can see that it made that area a little bit flat. I have attached a rework in the original post above.

A well seen image. It’s very characteristic of the Sierras yet I think many would have looked at this and not seen a potential image. The shadows look a little dark but lightening them would look unrealistic probably. The water came out really well.

Thanks, @Igor_Doncov! I was also thinking that the shadow may have been rendered a little too dark. I think I have lifted it as much as I could but it’s certainly worth looking into a little more.

I think many would have looked at this and not seen a potential image.

Cloudless days do make you look for other opportunities