D810 iso2K 300mm f4E &1.4tc 1/2000 f5.6
The the art version acorn, adjust contrast to taste.
For those who like a backstory…I was on a path in a park. Up ahead is a fork in the path. In front of the fork is a Robin. The Robin looks at me “tweet tweet”, then takes 3 hops ahead to the left, turns around then repeats the act 3-4 times moving on to the left fork. I get the memo. I take the left fork and this image thirty seconds later. All words welcome. 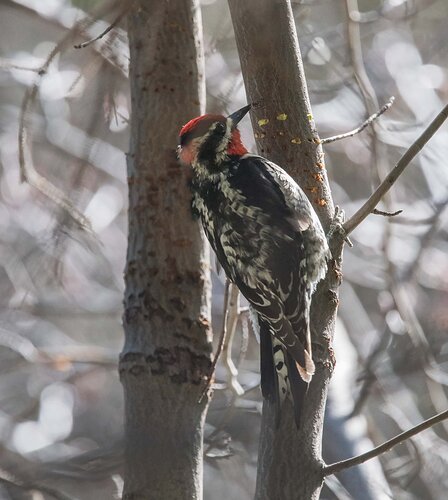 Nice concept. Agree with Ronald Murphy on increasing the contrast. Also, selective darken the brighter areas in the background. They make it hard to see the woodpecker clearly. I would also reframe the image and move the woodpecker towards the center or even a little left. There seems to be an oof branch over the head - not sure what you can do about it.

Just FYI – not an acorn woodpecker. I think it’s a Yellow-bellied Sapsucker.

I like the setting in this a lot, Steven. The pose of the bird is also fun. The odd smear on the back of the head does bother me a little. It looks as if the re was an out of focus twig in front of the bird, but the red blotch really catches my eye.