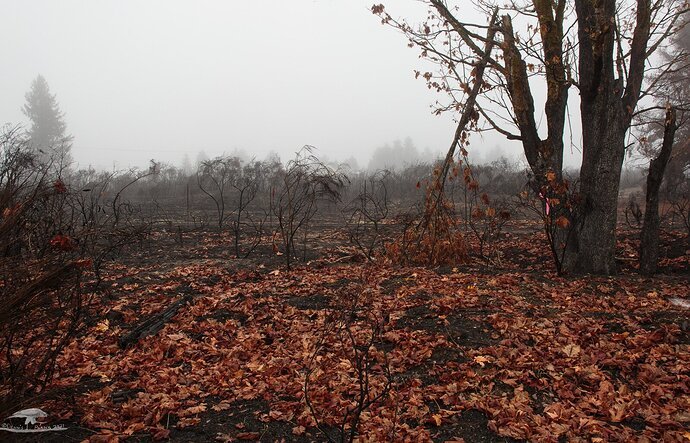 Compared with many of the wildfire disasters in the past year, the measly 500 acre fire we had seems pretty trivial. No one was hurt and only one home was lost and that was even the only place that lost an animal. However, it was scary for a day.

This is taken from the vicinity of where the fire started. It’s a 55 acre conservation set aside that a local developer was required to make and he let it grow up to a field of Scotch Broom. It gave the fire an incredible start. This image was taken 25 days after the fire, hence the dead leaves. The haze is from other wildfires not in our area.

Anything. I increased contrast and used a little dehaze on the foreground to try to give the image more depth. Other than that, it was just straightening and a minor crop.

Ah, summer in the western US (well, really it’s all year now

). I find this color palette to be quite pleasing in a way - the browns and grays after a fire have a certain look that appeals to me. And I’m saying this as someone who’s been burned out. You’ve captured the post-fire atmosphere.

I’ve heard that Scotch Broom is very dangerous as a fuel. It’s a problem in our area and very little is being done to control it.

There is a profound sadness to this. I’ve tried to find some art, or even good photojournalism, in the aftermath of some of our fires down here (Sonoma County wine country) and have yet to find one that shows any emotion – even pathos.

Condolences to you, Bonnie. I hope you have had a chance to recover and rebuild. We were victims of the Tubbs Fire in October 2017, that got over 5,000 homes and took 23 lives. Since then it has moved way down the list of the most destructive fires. I was able to save the backup drives for most of my photo archive and household documents. We rebuilt (as fireproof as possible) and moved back in a year ago.

@Diane_Miller, we were burnt out in the Carr Fire, July 2018. We didn’t rebuild for a few reasons. I’m glad you were able to rebuild. I was able to save the photo archives, cameras, and some memorabilia. I have lots of photos of the post-fire scenes around here as I just wandered around by bike afterwards, with my camera. Maybe I’ll post some of those pix for this weekly challenge, although I go back and forth on their quality and appeal.

Dennis, those lovely, warm brown leaves are quite the contrast to the rest of the scene. I think the broken limb adds a lot to the story as does the hazy distance.

This image feels like the epitome of “bare,” Dennis. I have also been evacuated from two forest fires (in Colorado). It is a devastating feeling. Your photo so reflects how I felt during these times. I agree with @Mark_Seaver about the broken tree limb adding to the story.