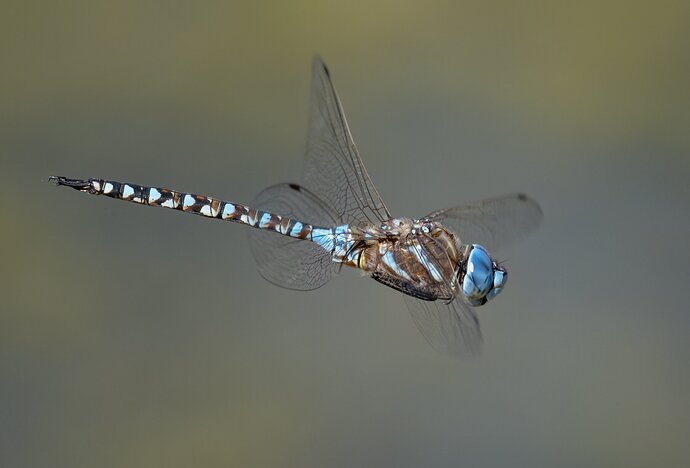 Last week I tried a different dragonfly pond and only got Blue Darners in flight. After the first 5-6 shots, they all look alike, but this one came pretty close and seems worth tossing up.

Totally worth “tossing up,” Diane, at least for me. The pattern in the body is crystal clear. Yes, the wings are blurred a bit, but that just creates the feeling of motion. Like this guy is on a mission and will not be stopped. Nicely seen and captured.

Some quick reactions to catch this guy in flight AND using a tripod. Good details and I like the slight wing blur. Cool shot.

Fabulous on so many levels. The detail and angle are pleasing to show as much of this short-lived beauty as possible. Those eyes are incredible. I was watching another of the big d-flies the other day and they change direction so fast it’s almost like they’re bouncing off of something. I always love an IF shot because it shows the legs all tucked up there. Wing motion looks good and you caught an angle where they don’t cover the body or head. I still haven’t managed a DIF so this is amazing to me. Maybe one day I’ll try.

Thanks, @linda_mellor, @terryb and @Kris_Smith! Terry, the only quick reactions are getting them in the frame, as these shots are all while they hover. They’re way too fast to stop otherwise. There are several keys to shooting them – being prefocused closely enough you can see them in the frame and the camera can grab focus, a clean BG so focus won’t jump to it, and a tripod with a gimbal head is mandatory, for me. That lens is a bit heavy. The gimbal head lets the camera/lens rest comfortably without the tipping of a ball head and lets it be swung easily in a cone trajectory. I start with both eyes open and align the DF with my left eye at the 10:30 position against the lens hood and my right eye then sees it in the frame and I can close my left eye and tweak the composition. At 20 fps I can sometimes get up to 40 frames before it vanishes in a flash.

Aside from carrying the weight of the lens, I’m pretty sure focus is faster and cleaner when camera shake is minimized. My acquisition and keeper rates went up when I switched from a well-worn Wimberley II to the Gitzo fluid gimbal head. It’s very smooth with variable drag in both planes.

But if you’re a good shot, you could get results handheld. All you need is a pond…

Diane, this one was nicely parallel to you providing great detail throughout the entire body. Excellent shooting.

A great in-flight shot of this beautiful dragonfly, Diane. I haven’t tried my hand at this with the R5 yet. I saw a few DF’s while at the camper, but didn’t have the camera ready to aim at them. Very nice shot here. That smooth BG really makes it stand out too.

only got Blue Darners in flight

“only got Blue Darners in flight” !! …Well… to me this image is:

Thanks @Mark_Seaver, @Shirley_Freeman and @Allen_Sparks! Shooting these guys in flight isn’t that hard because they hover. Occasionally. And tend to evaporate the instant you acquire focus. But once you do and they stay put for a second, you’ve got a good burst to choose the better wing positions. And sometimes they are parallel to the sensor.

Ah! I just discovered the EP! Many thanks to @Shirley_Freeman and whomever else figures these things out!