i’m looking for some feedback on this shot i have been working on for quite a while. i took it a bit more than a year ago and after months of slow progress in postprocessing i have come to the point where i either call it finished or start from scratch.
i went with less contrast but more saturation here. after all this was a quiet morning with less than 4 minutes of intense light, leaving me with some of my fondest memories of this place. i enjoyed having this scene to myself after a two-hour walk in the dark. luckily everybody else (there where plenty) had gathered around laguna torre…

thanks for taking the time to comment and critique!
cheers,
joerg

(If this is a composite, etc. please be honest with your techniques to help others learn)
this i a simple blend of 4 exposures at 2 different ISOs - for dynamic range and water movement. 50mm. 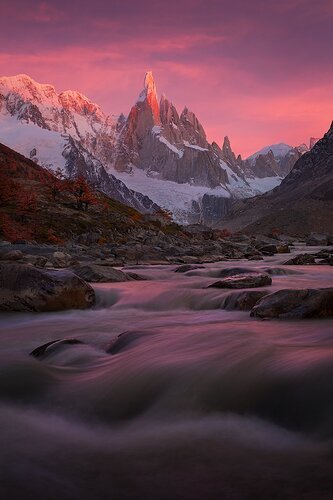 Beautiful light and scene. I would be tempted to add a bit more contrast to the upper 30% (I did a quick gradient mask and added a curve layer) and like it. That said, it is very much a personal preference and you said you chose to leave the contrast understated. Nice image as posted.

That is one gorgeous light. I also want to see a little more contrast but this could be a matter of style.

Joerg, I really like result of your blend. The overall look is quite dramatic. What I find most appealing is the rich red tones of the trees on the LHS. Although I acknowledge a possible boost in contrast an option, if mine I think that boosting the light levels a bit on the left portions of the land and the stream, while leaving the right portion darker, such that the lightsource generally replicates that of the background. The sharp aspect of those peaks magnificent !

I like the processing as is. If anything I would remove some of the water at the bottom. It takes up half of the image and just doesn’t contribute it’s share. I would crop to above that sinewy wave going left to right. This is the type of image that is well received by the photography community and I’m sure there will be many accolades. Great job.

It could just be me, but I feel it has way too much magenta, that’s probably what you were going for but it seems over the top. Here’s where I would take it and you can take it or leave it

I agree with some of the others that you could crop some off the bottom, but I also cropped some out of the sky since there wasn’t a lot going on in the top of the frame. This also gets it closer to 4:5 which is more pleasing for a vertical in my opinion. I also did some dodging of the lighter tones in the foreground as I felt it was a little too dark. I wouldn’t add contrast to the mountain, being slightly hazy gives atmospheric perspective and a sense of depth.

All that said, it’s beautiful the way it is and I’m nit picking, bravo sir. 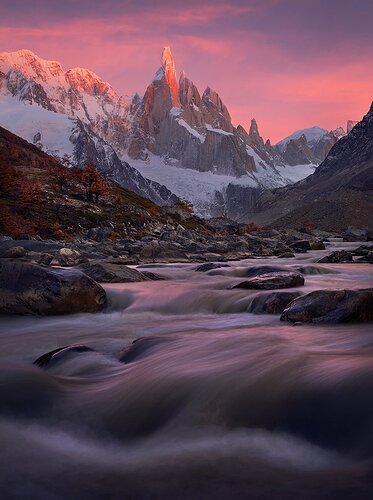 That is certainly some stunning light and scenery, Joerg. Kudos for the hike in the dark to put yourself in position to capture this beautiful scene. While I like the original I think David’s couple of tweaks elevated this image another notch. Great work.

Hi Joerg. This is a really cool image in my opinion and not one I’ve seen from patagonia before so that immediately makes it better in my mind.

I think you have controlled the balance and the mood of the image really nicely. I like where all the elements are positioned, especially the horizontal line in the water in the immediate foreground. I would also go with a 4:5 crop here as @David_Kingham suggested for the same reason as him. I also find verticals too long. It also, in my opinion, gives off the impression that its more compressed accentuating the foreground and the mountain.

In terms of adding contrast to the mountain, I think it will detract from the atmosphere that you have captured.

This must have been amazing to experience this sunrise in person, the light is exquisite. The basic composition is very dynamic and powerful, but the processing tweaks made by @David_Kingham really puts this image over the top. I especially like David did to the water, it has more vitality. Joerg i think your thought to go with lower contrast processing works with the mountain and sky, but not the water, and thats why I prefer Davids rework.

Hard to be critical here and so I think most all the suggestions are tweaks to make this even better than is already presented. I think David’s edits are excellent and I can’t add anything further.

Stunning Joerg. This is really epic. I love David’s changes too, except I would leave just a touch more color in the water.

thanks everybody for taking the time to comment! i finally had time to sit down in front of this image again. i did a little rework based on some of your suggestions.

contrast:
thanks for your opinions on the contrast and levels @Harley_Goldman, @Adhika_Lie, @Bill_Leggett, @David_Kingham, @Eugene_Theron and @Ed_McGuirk!
i only ever so slightly enhanced the lighter tones in the water and brought up the luminance of some rocks in the midground just a hint.

colours:
ooh man have i been off…!! a huge thank you to @David_Kingham for pointing out the magentas (and other things)!! i was so worried about the reds on the mountain that i didn’t even realize that the sky was absolutely over the top.
i did work on the sky, going probably half the way you went, david. i’m very pleased with how the sky looks now - it made a huge difference on how the peak stands out! i also reduced some of the magentas (and purples) in the water while keeping the overall vibrance of the reflected light. cooled the foreground shadows. the mountain stayed untouched.

crop:
for some reason i hold on to the 2:3 aspect way too often. i’m not seeing what many people see as verticals being to long. nevertheless there are parts of the sky and the foreground that don’t add anything to this particular image. i went with a 5:7 crop. 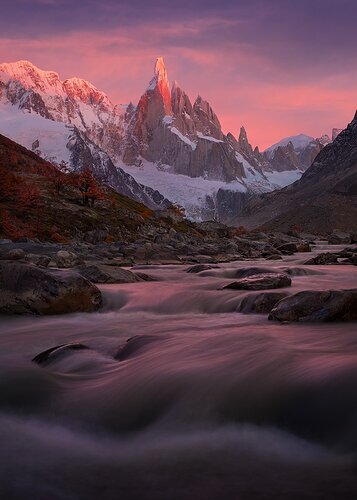 what do you think?? better now?
thanks again everyone!!
cheers,
joerg

You’ve nailed it with the rework!

Wow @Joerg_Bonner… Sometimes I see a photograph that fills me with an urge to drop everything and run out my door, camera in hand. This is definitely one of those. Nicely done.

thanks @Heath_Barbier! i guess that’s the kind of emotion i wanna spark with my work. thank you!