Autumn on the Loop +crop/rework

On the loop, the loop around Yosemite Valley that is. While I try and spend as much time as possible actually walking along the river and the meadows, inevitably one finds themselves driving around the one-way loop around Yosemite Valley chasing the light and getting to areas at certain times of the day or conditions. Most areas on the west end of the valley along Southside drive remain in shade during the late fall and winter months simply because the sun never reaches high enough over the valley walls. This allows for shooting without direct, harsh sun most all day long. And as is the case here, there are countless “drive-by” scenes right along the road that I’ve passed for years… but finally gave in and had to try and make something of it.

As always and/all feedback on processing, color/sat/luminosity, etc. I don’t know about anyone else, but I often find myself spending way too much time tweaking an image, eventually losing sight of the big picture. So, time to put PS down on this one and get some feedback.

I have my own issues/reservations but will let others comment to see what you all think.

repost: Thanks Harley, see comments down the thread. I’ve cropped and reworked this just a tad, removing some red/magenta in the cedars and popped the colors a tad more. 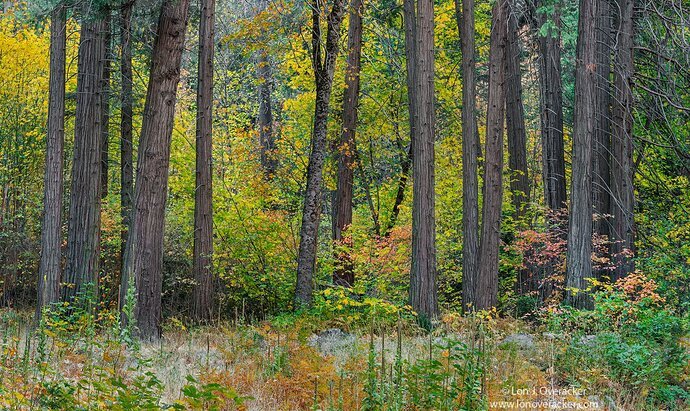 I am enjoying the color and verticals of the tree trunks. I think the green cedars (?) coming down from the top are distracting. I would consider a pano crop to eliminate them and maybe crop off the left one as well. That really tightens up the comp and leaves the meat of it, so to speak. Processing looks good to my eye. Nice one from the loop.

I was thinking along the same line as the two suggestions Harley had, Lon. I am thoroughly enjoying the muted autumn colors and the wealth of details in the larger view and the processing looks spot on to me. With scenes like this being in the shade all day sounds like nirvana to me.

. I don’t know about anyone else, but I often find myself spending way too much time tweaking an image, eventually losing sight of the big picture.

Deja vu all over again, as that great philosoper, Yogi Berra, once said

At first I thought that the bark on some of the trees was a bit too magenta, but after a while I can talk myself into thinking that that is not the cases. Yellows/greens/ochers look good to me, though.

At first I thought that the bark on some of the trees was a bit too magenta, but after a while I can talk myself into thinking that that is not the cases.

Alberto - keen observation! I say because that’s an area I’ve struggled with. I have 3 different layers further reducing the red/magenta in the cedars, and again a bit more on the repost. I think better and thanks for mentioning, even though you convinced yourself otherwise…

@Harley_Goldman, good call on the crop suggestion. As I mentioned to you, I’ve been tweaking this on and of for a couple weeks and not once did I ever notice the bare branches coming down from the top; which I didn’t notice until you got me looking at the cedars coming down from the top. I like the tighter crop much better, which removed the boulder on the lower left as well. Thanks!

The crop/re-work looks great, Lon. Magenta can be hard to deal with. The Autumn color looks great.
-P

Boy that’s a tough one. Both compositions are good. I think I prefer the original, however. I don’t find the hanging branches distracting (unless we’re talking about those 3 dead branches hanging down) and I like the more wide open forest scene. I also prefer that dark tree on the left border instead of the bright yellow of the crop. Somehow I get the feeling that that was thought out when the image was originally composed in the viewfinder.

I used to shoot the valley quite a bit in the 80’s and I distinctly remember that the bark of the cedar trees had a magenta look to them. So I wouldn’t change that in processing.

I appreciate the inclusion of the ground cover here, thus avoiding another “barcode” composition.