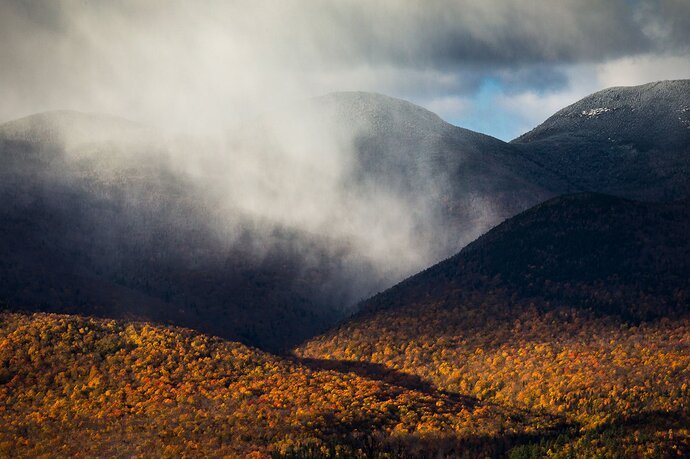 Rework, with cloning of bottom shadows, added texture in clouds, and less contrast in the background mountains. 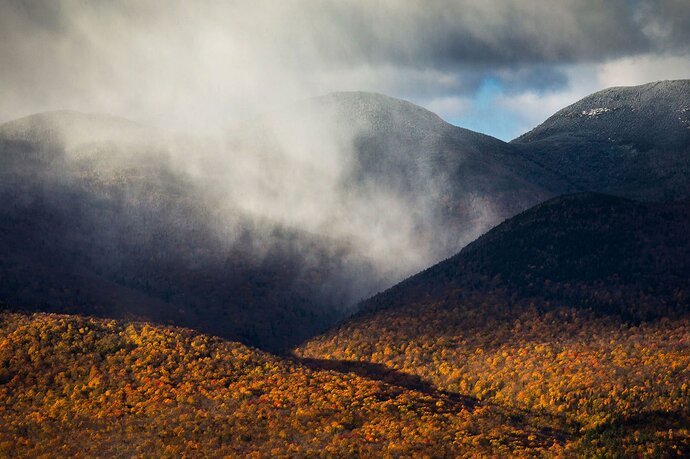 Here is another image taken during the same sunset as my prior post of a B&W image. This was taken facing east/southeast at sunset during autumn in the White Mountains of New Hampshire. It had been cold and cloudy all day, with snow at higher elevations, but I got some good gap light from the west a half hour before sunset. The diagonal cloud here is actually a line of snow squalls. This view is a bit more southeast facing than my prior post, so I got a little better side light than in that other image, which made the autumn colors a bit more intense.

Fascinating image, Ed, very compelling. At first I thought I was looking at rocks covered with lichen in the foreground. You’ve beautifully captured the textures and play of light and shadow. I’m particularly drawn to the play of light and shadow along the mid ground rock face with the snow squall rising around it. Because that area of the picture is so strong, I might be tempted to crop a bit off the bottom (which, due to the light and bit of business with the shadows there, tends to compete ) to just about the top of the shadow, lower right.

Another excellent image. Even before reading @Kerry_Gordon 's comments, I was thinking the same thing about the crop. I tried it quickly and like the result. Great mood to this and I quite like it.

Terrific atmospherics here Ed. You have captured the foreground trees in beautiful fall colors and have wonderful soft warm light at the bottom of the image. I can just see the snow starting to accumulate in the highest peak in the URC and the blue peaking through the clouds gives this nice depth. But I have to say, that the angled band of snow squalls steals the show for me. You also have nice repeating angles in this image Ed.

What a wonderful scene! I wonder, though, about a “gentler” (lower contrast) version that would, for me, fit well with the soft detail in the snow cloud. I did a quick Detail Extractor to get a feel for it. Bringing more detail onto the cloud could allow a squeak higher exposure, for a similar feel, although I didn’t change the exposure here.

I think an alternative to a crop from the bottom is to darken the LL a bit to balance the dark area in the LR. For me that provides a nice base. 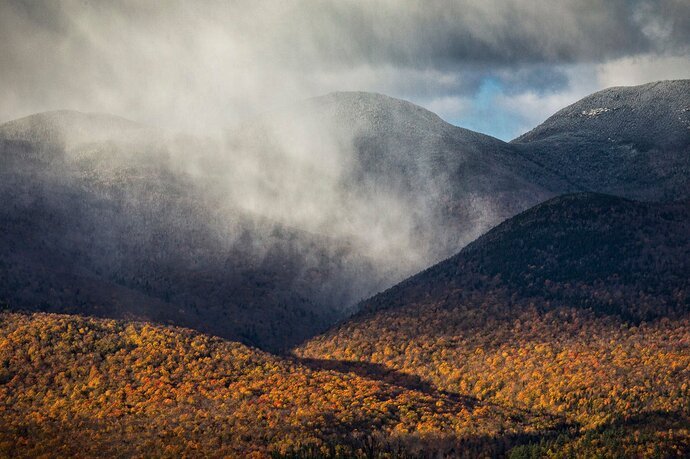 Ed, I felt I had to say something about your image after all the analysis, nits and comments you have given me. From witch I learned a lot !
An stunning image, overview of all sorts of weather, trees in autumn colors and winter snow (a word learned - snow squall) .
I tried a rework with the thought to bring back the contrast a bit.
It didn’t work ! So I had to leave your excellent work as it was. Therefore no nits from me !

P.S. I just now read the comment from Diane.

Kerry and Harley, I agree with you that the shadows in the lower right are a potential distraction. I am hesitant to crop a lot from the bottom, because I don’t like losing that much of the left ridge’s diagonal, to me that reduces some of the repetition of angles that David Haynes mentioned (which was the primary attraction of this composition to me). So I decided to cheat and did some cloning away of the shadows instead, in an effort to retain all off the ridge on the left.

Diane, I like what you did with Detail Extractor to the clouds and snow squall. I am usually reluctant to add texture to clouds or fog, I usually prefer a softer look in them. But your rework brings out some detail in the wispy plumes that helps. In terms of reducing contrast, I think your rework is helpful in showing more detail in the background mountains, but I’d prefer to retain the strong contrast in the sunlit foliage at the base of the mountain.

So I posted a rework back up top, cloning away the bottom shadows, adding some TK Dehaze to the clouds and snow squalls to show more texture, and pulling back on the black point to reduce contrast in the background mountains.

Just a gorgeous image, Ed. Personally, I prefer the bottom shadows in the original. @Diane_Miller’s edit is also really nice. I don’t really have any great consturctive feedback beyond just my overall admiration.