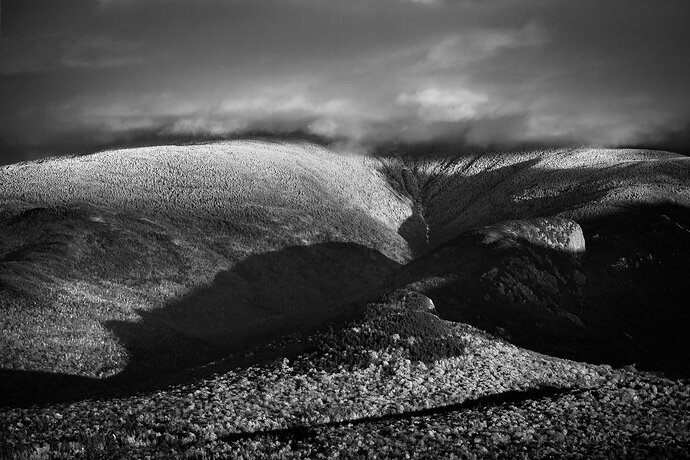 Rework with a crop from the top suggested by Harley. 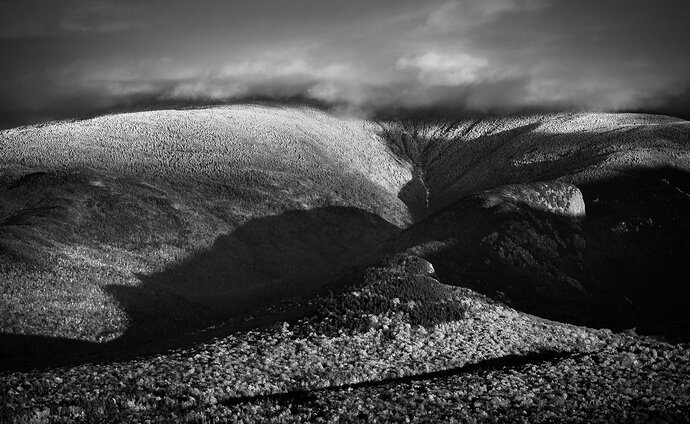 A second rework, with less of a crop at the top, as suggested by Harley Goldman 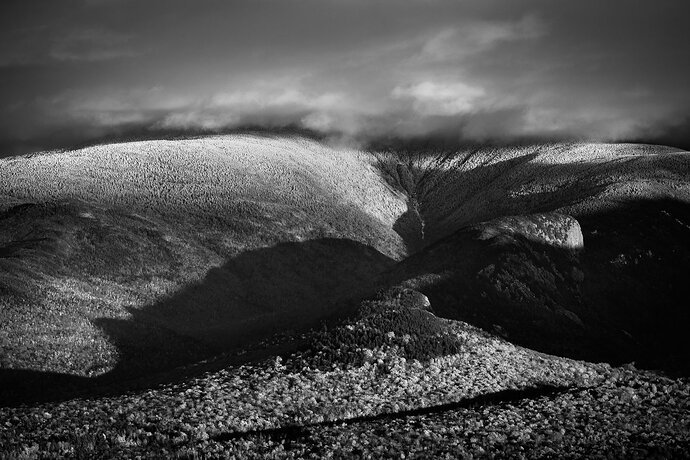 For informational purposes, the Color version as requested by @Vanessa_Hill 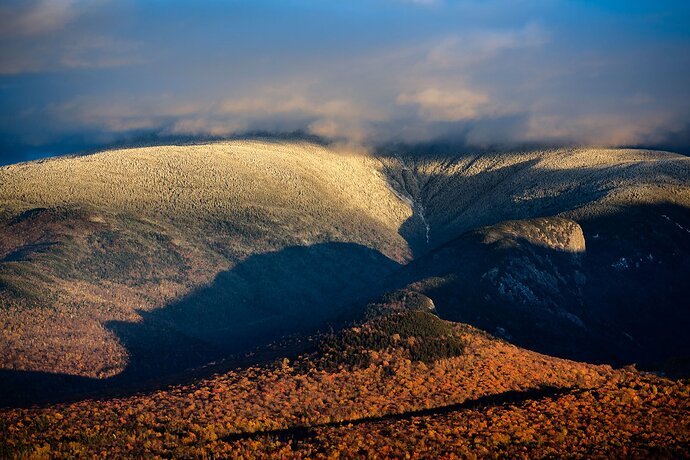 An early snowfall was the icing on the cake for this autumn sunset taken in the White Mountains of New Hampshire. It was a cold, cloudy day with snow at higher elevations, but a half hour before sunset a gap in the clouds opened on the western horizon, flooding the landscape with this dramatic storm light. This was taken from the fields in Sugar Hill, NH, facing east towards the mountains as they caught the last light of day. Normally one thinks of color images for autumn scenes. But the the warm late afternoon light made the yellow and orange trees at the base of the mountain look almost muddy in color. Only when converted to B&W did this scene come to life for me. The luminosity of these trees just shone in B&W.

I really like this, Ed. The tonality is wonderful and I like the contrast in the foreground too. The valley almost feels like a whirlpool or sink hole. And the clouds are wonderful. I wouldn’t change a thing.

I love the luminosity of the trees and the pinwheel comp. I might trim a bit off the sky to just above the middle right upper cloud. Minor though. Good one

Gorgeous light and interesting composition. I feel like I’m being drawn into the abyss.

I feel like I’m being drawn into the abyss.

I agree in general with this statement. Even though this is an image of hills and trees I feel it goes beyond that and is suggestive. The light and shadows together with what appears to be fog creates a sense of mystery and lets the imagination run. The dark straight line at the bottom does as well. The shadows on the mountain have a menacing look. Overall, it’s one of your best and most imaginative images in my opinion.

This is a really striking image Ed and I really like the strong contrast.

thank you for your comments, I appreciate it. Harley thanks for the suggestion , I do like the suggested crop from the top, rework posted back up above with the original.

I think you were better off without the crop. It’s brighter overall now and therefore the mood has changed. The upper mist gave the image a certain amount of mystery which has been diminished.

Ed, I was thinking a little less of a crop, along these lines. 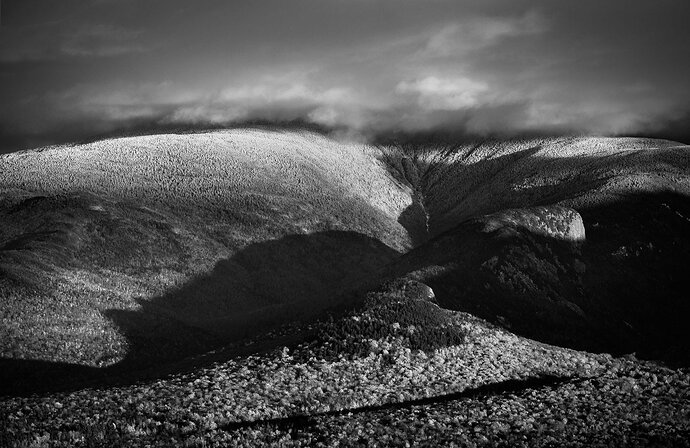 Ed, I was thinking a little less of a crop, along these lines.

Harley, yeah thanks, I prefer your version of the crop over what I did. I do like having some crop though because I think it makes the top of the mountain (and the dark shadow of the clouds at the horizon) a bit more prominent in the image, which adds to the moodiness for me.

Really beautiful image, Ed. I don’t think I’ve ever seen a black and white from you before. I like your first original best. I also like what @Harley_Goldman did with the crop. It brings a little more attention to the clouds/fog and the mountain. You calling it a sunset really does make me want to see it in color!

I agree with what everyone is saying. This image just draws you in with the shadows and bright trees and the three converging dark valleys creating this wonderful abyss. You can look at this one all day long and just imagine. It’s kind of otherworldly to me. Just beautiful Ed!

@Vanessa_Hill @joaoquintela @David_Haynes
thank you all for your comments and thoughts, I appreciate hearing them.

I have posted a second rework back up top that has less of a crop from the top, along the lines of @Harley_Goldman 's rework.

I don’t do a ton of B&W, but I am trying to mix up the variety of what I post here at NPN. I love doing color autumn images, but this one just begged to be presented in B&W. I think the B&W image is more dramatic than color. I tend to only show a narrow slice of my work here at NPN, and for 2022 I’m going to try to post a broader view of my work.

You calling it a sunset really does make me want to see it in color!

You asked, and I have fulfilled your request. The color version is shown back up top with the original. It is a sunset image, but I am facing east/southeast, so there is no sunset color per se. But there was some really nice warm light on the mountains and clouds.

It’s also fairly uncommon to get snow and peak autumn foliage at the same time in northern New Hampshire. But this image was from a year when the peak foliage came a full two weeks late, in the third week of October instead of the first week. This was late enough that I had a decent snowfall for the weekend that I spent chasing this. The snow that stuck was at high elevation, but 10 minutes before I took this shot, where I was standing down in the valley had white-out snow flurries that had to let up before I could get this shot.

I love B&W, but I sure do love the color version you posted!!!

Ed, I like the original version best but like Harley the color version is amazing as well. Wonderful work on B/W processing.

I think the color version has really nice warm light and color in the sky, and the same benefit of the shadows as in the B&W image. But for me the trees at the base of the mountain come across stronger in B&W than they do in color.

…ear when the peak foliage came a full two weeks late, in the third week of October instead of the first week. This was late enough that I had a decent snowfall for the weekend that I spent chasing this. The snow that stuck was at high elevation, but 10 minutes before I took this shot, where I was standing down in the valley had white-out snow flurries that had to let up before I could get this shot.

I think I really like the color image best because you can tell that it’s fall with the snow mixed in. I love the warm brown fall colors.