I had gone to a state park for an afternoon hike in the woods in early March. When I got down to the edge of the lake there was all these bushes right at the waters edge. the lake surface was very smooth and the light was nice, as it was around 5:00pm. so I chose this one because of the background and it’s shape. 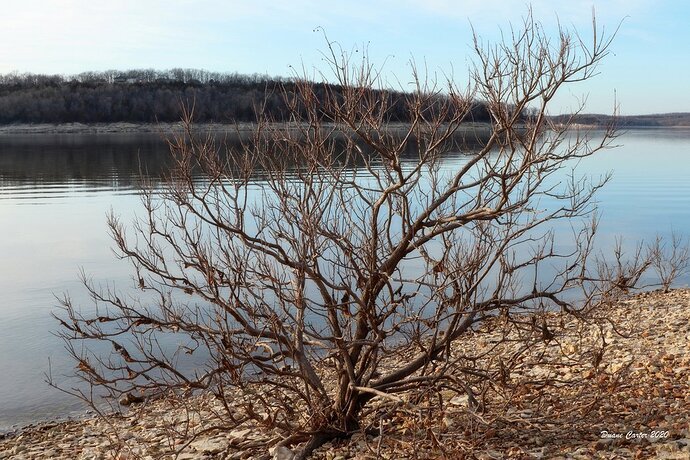 That bush definitely has a lot of character and the water is beautiful. Looks like there is a lot of interesting texture in the shore around the bush, too. The color palette, with the browns and blues is very pleasing.

When you say you chose this view for the background, were you thinking of the water as a background or that far shore? If your intent was to showcase the bush against the water, that far shore somewhat interferes with that. It cuts through the top of the bush, making it harder to get the full character of the bush. It probably was difficult to get a clear shot of the bush without the far shore interfering. You could get down low, but then you’d lose the water. Lovely scene, nonetheless.

This bush definitely has a very interesting shape, and a lot of character. I do agree though with the comments by @Bonnie_Lampley about the shape of the bush getting lost against the dark tones of the background shore. Ideally you could best show of this bush by placing it against a background of only water (or sky for that matter). In this case if you had been able to stand more to the left and pace the bush against the really distant (and lighter) far shore, more of the character of the bush would stand out.

I agree with the comments about the background. Another option would have been to move back and have the bush as part of a bigger picture.