Bend in the River

In this picture I was trying to capture the lovely “s” curves along both banks of the river, the flat, almost prairie like expanse of the horizon and the glorious structure of the beclouded sky. After paddling for weeks through rock cliffs and thick (sometimes burned out) forest, to suddenly come upon this expansive landscape captured and stirred our imagination. It was taken when the sun was still pretty high, so, the light was flat. I knew from the get-go that if this picture was going to be, it would have to be black and white. The biggest questions I have when doing a monochrome image like this one is how far to go with contrast. By contrast I don’t mean simply pushing the contrast slider around (I actually never use contrast in Lr) but using other, more subtle means and masks as well as dodging and burning (which I did a lot of on this image). So, it is the Goldilocks question: too much, not pushed far enough or, just right? 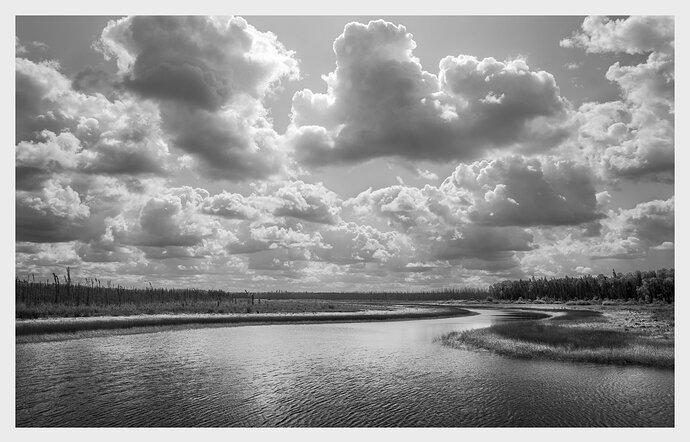 The biggest questions I have when doing a monochrome image like this one is how far to go with contrast. By contrast I don’t mean simply pushing the contrast slider around (I actually never use contrast in Lr) but using other, more subtle means and masks as well as dodging and burning (which I did a lot of on this image). So, it is the Goldilocks question: too much, not pushed far enough or, just right?

The answer to this question of course depends on what kind of mood and message you are trying to convey (and only you can answer that). All I have to go on is your comment about the expansive landscape being a welcome sight. To me “expansive” suggests having a brighter, lighter mood. To me that would mean not letting the contrast in the clouds get carried too far. For a bright light mood, I think your sky does the job well. You also said you wanted to emphasize the S-curve in the river. Again if the drama of the clouds gets taken much further, it would draw more attention away from the river. I think you have a Goldilocks sky here.

A secondary question for me was whether you should gentley dodge some of the lighter colored shore grasses on both sides of the river. If done subtlety enough, I think it might enhance the S-curve a bit, without detracting from it. This is a nitpick though, overall this is a very nicely done B&W that fits well with what you said you were aiming for in your comments.

I can’t comment on the contrast question but this image is really well done. I find that clouds are surprisingly hard to get right. By right, I mean conveying how they feel to you. You need just the right amount of brightness in the lighter sections and the right amount in the shadows. In fact clouds vary in their appeal in relation to where the sunlight is coming from. Most people make their shadows too dark in my opinion.

As much as I like the water and it’s reflections this image is about clouds. They’re glorious. When you get a day like this your life has wings.

Beautiful clouds and beautiful image. I could see experimenting with pushing the sky a bit more, but I am not sure you would improve the image (would just have to try it). Great wide open feel and conveys a soaring of emotion feel. I like it a lot.

When you get a day like this your life has wings

So true, thanks for sharing this @Igor_Doncov.

@Ed_McGuirk, @Igor_Doncov, @Harley_Goldman, @linda_mellor - thank you all for taking the time to read the image and respond. It is always most appreciated. And yes, Igor, when I get a day like that, my life does, indeed take wing. So, imagine thirty days of that at a time!

I think black and white imagery is all about mood and what kind of emotional response you are looking for from the image. Given your description of 30 days paddling through rock cliffs and burned out forest and suddenly being presented with this open and expansive landscape, my feeling would be a lot like what Ed’s had to say. It’s about not being confined anymore and to me that means maybe a lighter and brighter mood. So I would say that you’ve pretty much nailed this one from a contrast/mood point of view. You could certainly go into the blue channel and darken them for a more foreboding type of feeling but I don’t think that’s what this image is about, at least from your description, but it’s worth experimenting with. This was nicely composed by the way.

@David_Haynes. Thank you David, I appreciate your taking the time to look and your comments.