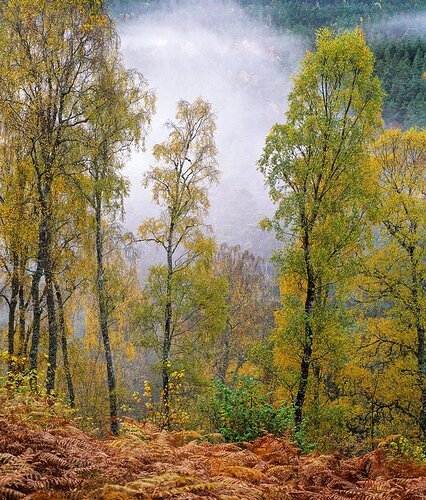 Autumn colours at Glen Affric and its two associates Strathfarrar and Cannich is a sight to behold, the woodland is a mix of Birch and Scots Pine with a bit of Beech and Oak thrown in for good measure. The problem is that a lot of the views are obscured but occasionally it is possible to simplify the chaotic backdrop, mist certainly helps create a bit of separation and this particular spot has a natural break in the trees which I was able to utilise to great effect.

Ian,It’s bit as if it is in a theater. Grand colors and depth. Great succes for you and I love it. No nits on this site.

Ian. In general the shot is fine, but I do find that the fog/cloud not covering the upper right corner to be a bit distracting. If that had been covered it would have transformed the shot from OK to really quite good. Hope that helps

Lovely autumn colors Ian. Wonderful to view this especially after we got +20 inches of snow over the past two days in NH.

Most beautiful autumn scenic! And similar to another image you posted, this image reminds me so much of an area that I’m so familiar with - Yosemite. I know Yosemite doesn’t have birch or beech trees, but the oaks… I could imagine this scene, including the wintered ferns anchoring the composition. Love the transition of color too from the green to yellow…

It’s rare that I would have any nitpicks with your work, but the one small one I have would be to clone out the small yellow/orange tree in the blue/green forest UR edge. I’m also undecided if I like that open area in the UR. Certainly the fog is more defined important as this is presented, but I can also understand Eugene’s comments as well. So I’m torn. I also see and understand your feeling of the fog providing a separation between the trees. But for me as the viewer who wasn’t there, I’m more attracted to the trees and that transition of colors and think cropping off the top could be a viable alternate.