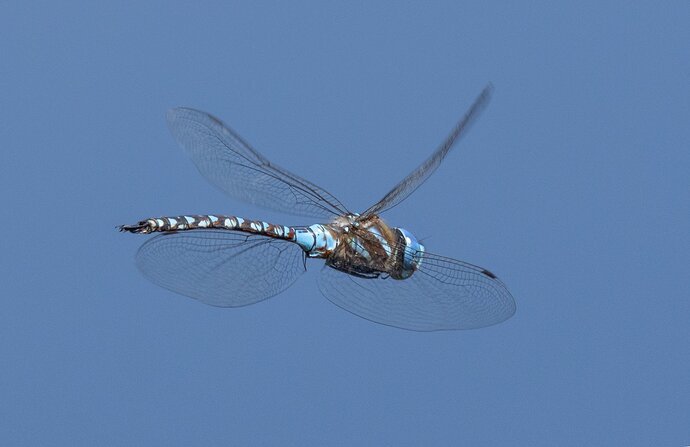 Not exactly a macro but I’m not sure where else to put an insect in flight. There is nothing artistic about this and the “head angle” is certainly not compelling, but I’m posting it for fun because it is a focus stack! These things hover for a few seconds and I was lucky to get it in focus and fire off a few frames at 20 fps. One of them had the body and wings fairly good but the tip of the abdomen was not sharp. Another, 4 frames later, had the tip sharp and the rest not. So, stack and mask…

All comments welcome! Really just posted as a curiosity.

Oh wow, Diane, this is really nice. I really am enjoying the shade of blue on him against the blue sky. You did a super job with the stacking of a moving DF in flight. Really impressive. It has been so hot down here and I have been rather busy as well, so haven’t even tried to take any of the DF’s in flight yet. It is nice to know that the R5 did such a great job. Did you use the eye detect function? Great shot.

Wow! That’s some mighty quick reactions! Like @Shirley_Freeman, I really like the blue on blue and the nice detail you accomplished, even if he’s not facing us. An in-flight focus stack…who woulda thunk it??? Nicely done.

Holy smokes, Diane! Twenty images stacked while the darner was in flight! Amazing. The blue sky and blue darner couldn’t have worked out better. Fantastic capture… . . and yes, it is fun.

Thanks @Shirley_Freeman, @terryb and @linda_mellor! This wasn’t a standard focus stack – I was just shooting at 20 fps (spray and pray), and as I looked thru the shots there were two where focus hit slightly differently but the DF hadn’t changed position and I was able to do a masked stack of 2 frames, with just the abdomen tip from the second frame.

I have the camera set for back button focus – in the Customize Buttons menu. The * button is set for Eye AF and the AF-ON button is set for whatever focus mode I have in the AF Method menu. Usually that’s “Expanded AF Area” but can be varied with the subject. With subjects with a smooth OOF BG I use the * button, which grabs whatever it likes in the while frame. If it can’t find an eye it will usually find a head. It can find the eye of a briefly-paused hummingbird as it pulls back from the feeder for a second, but Black-necked Stilts who aren’t even moving drive it nuts. I can see the focus points jump around as it tries to decide or keep up with a moving subject, so it’s not rock steady in most situations. I’m not sure what it was homed in on with the DF. I don’t think it was, either.

Thank you, Diane. I think you have the buttons customized just like I do. I do like back button focus much better than trying to half press the shutter button. Thank you for the info. I was pretty sure that was what you meant focus stacking, just only a portion of one shot being used to mask in basically. It’s a great shot, in my opinion.

So, stack and mask…

And why the heck not? I’ve done that sometimes with still subjects that had different areas of crispness. Doing it with a DIF is pretty impressive and a great use of post processing technology. The varying shades of blue are nice as are the wing positions. super.

Thanks, @Mark_Muller and @Kris_Smith! It was actually a DIH (hover) and had barely moved in the frame between the 2 shots. These guys do that, but usually the instant I acquire focus they shoot off. It’s like they’re teasing me.