Lake Tahoe, July of this year. This was sunset at Basai Rock. I went to capture this the past 2 years but the lake was so full that there were virtually no foreground rocks. With the dry winter we had this year the lake level has dropped a couple of feet allowing for much more foreground interest. I know this is an iconic location and is shot by nearly everyone but I couldn’t help myself. The light was really good, we had been experiencing late afternoon thundershowers nearly every day, and this day was no different. In fact, this storm caused a lightning strike fire and as I was shooting there were hot spot scouting planes flying overhead constantly as well as helicopters with buckets. I had to take cover under a rock for about 15 minutes when the rain became heavy but it was fun listening to the thunder and lightning. This was a long exposure to flatten out the water that was fairly rough and it was windy but not terrible so the bonsai trees on the rock are definitely not tack sharp. Thanks for taking a look. 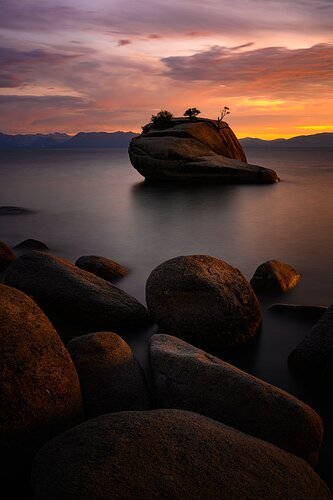 Wow, this is one sweet looking image David !!! The light is gorgeous, the sky in particular looks looks awesome. I also really like what the long shutter speed did to the water, it creates an interesting smooth / sharp contrast against the texture of the rocks. The Bonsai trees look fine to me, with this this kind of color and light in the scene no one is going to notice that the trees aren’t totally sharp.

For an image that is excellent already, I’m hesitant to offer suggestions, but I have two. However I’ll admit they are both subtle and subjective. I wish there was a little more breathing room on the right, particularly given the tightness of the second rock from the bottom to the right frame edge, I would suggest adding canvas and doing Content Aware fill. I also think you could get away with some subtle color dodging of the lighter tones in the Bonsai Tree rock, to draw more attention to it. Here is a rework reflecting both of my comments. 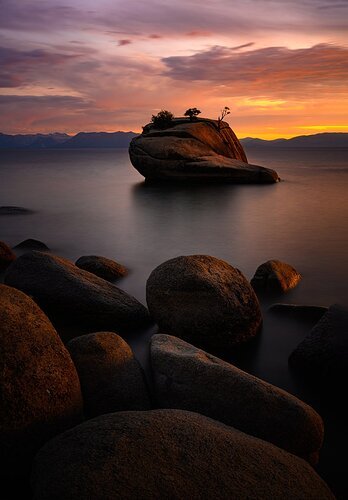 The light you captured is beautiful David! The smooth water adds a peaceful mood to the scene.

Thank you for the rework @Ed_McGuirk. I actually cropped the right side because there is a rock out in the water that is distracting and didn’t think to add canvas back after the crop. Great call on that. I love the warmth and light that you added to the bonsai rock. It is subtle but a great addition. Thanks so much for taking the time. I also appreciate you letting me know that the lack of sharpness of the bonsai trees is not that critical. I have been second guessing that.
Thank you @Eva_McDermott for your comments. I really like to flatten water when it’s wind blown and lumpy and I needed the full 30 seconds for this one.

Gorgeous light and a great choice of exposure time.

@Ian_Cameron, @Diane_Miller, than you for having a look-see. I agree that @Ed_McGuirk adjustment really takes this up a notch. I learn something on every post with the great input that I receive. Thanks again!

You worked hard to bring this fine scene to us. Thanks. The light is simultaneously calm and exciting.
I felt the rocks were a bit heavy on the bottom, so tried to crop in a bit . Also color dodged the rocks and mountains a bit. 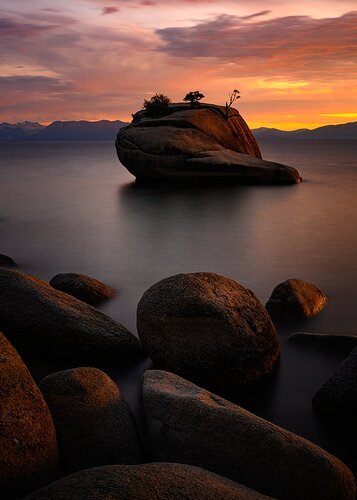 Thanks @Dick_Knudson. By cropping on the bottom and the left you actually took care of the lone rock about halfway on the left side of the image that has bothered me about this image. There was a similar rock on the right side that I cropped out. The crop off the top looks pretty good as well so I’d say that this is just about right particularly with the color dodging you did on the rocks. Thanks so much for doing this Dick.

The image is beautiful and the light is marvellous. I like the last cropped version, which is very well balanced. I also like the appearance of the first crop (that with the added canvas), but I personally do not like to add non-existent components. I know this is opening a long and complex issue, but, in my view, we should depict only what is there - or a part of what is there… Just my feeling.

This image has stayed with me since I first viewed it several days ago. I’ve been to this iconic place, which is now a bit of a scramble for someone my age, and this is simply beautiful, very natural. I like Ed’s tweaks on the big rock. I’ve seen many images of Bonsai Rock, and this is among my very favorites.

Thank you @Kathy_Barnhart and @Antonello_Provenzale for your comments. No doubt about it Kathy, this is a scramble down a very steep trail. Luckily it’s a short trip to the bottom but that hike back up is a doozy. I’m very happy that you consider this one of your favorites of the location. It’s a very popular location and I’ve found that the water level needs to be just right. I agree that @Ed_McGuirk’s tweaks to the rock make the image better. I also really like the crop off the bottom that @Dick_Knudson did to this image. Thanks again for your comments.

Super image and just about perfect … my only wish would be the central subject being a bit more to the left … but I suspect the composition involved a fair bit of compromise with the foreground rocks to get them looking balanced so maybe this is wishful thinking and would actually make the overall image problematic in other regards.

Thanks for the comment, Steve. You pretty much nailed the reason that the rock is dead center. To the left, there is a rock about half way out from shore to the main rock and you can see that rock creeping into the picture on the left side. On the right side, there is a similar rock that is juuuust out of view which is why I don’t have more room on the right for a better composition. With all of the rocks all over the place, it’s not easy to find a great composition and the rocks on the shoreline tend to be pretty chaotic out of frame. You nailed it. Thanks again for your comment.