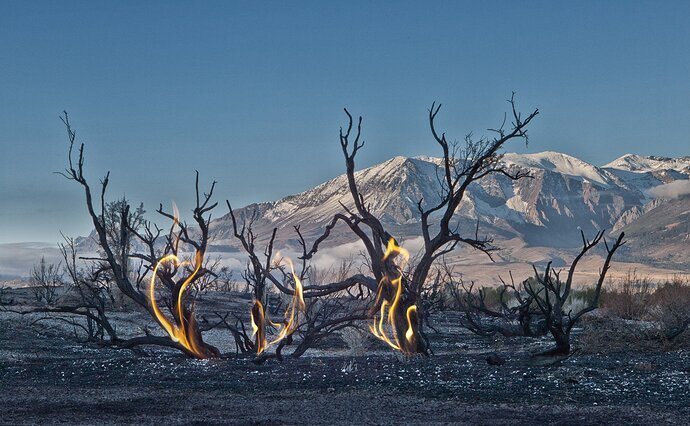 Twelve years ago, driving out from the South Tufa at Mono Lake one morning, I had to stop and shoot the remains of a lightning fire. After getting it in the computer, it wasn’t as interesting as I had hoped, so I went back to some flames shot two years earlier and had some fun. (No warping here – the one on the left just fit that well.)

Nice idea executed very well. I really like how the flames fit so well. The photo without the flames is topnotch, too.

Thanks, @Jim_Gavin and @Donna_Callais! Here is the BG image and another one – both just out of LR with current profiles and minimal S/H adjustments. It was pitch dark when I drove in for a sunrise shoot, so I was surprised to see this as I drove out, and it was too late for interesting light on the mountains, and I was on my way south to Death Valley later that day so no redo the next morning.

It’s funny how you remember some situations and this is one – I had been way short on sleep for a couple of days and after the sunrise shoot all I wanted to do was get back to Lee Vining for breakfast and coffee. Make that coffee and breakfast. I ran out into the burned area but the views with the mountains in the BG also had the road in them. These two were about all I managed with interesting larger bushes - most were very scraggly.

And maybe a few hundred feet on, the burned bushes were in the light, which looked even more interesting – maybe. I pulled over and thought about it and drove on. Sleep deprivation doesn’t work well for me. 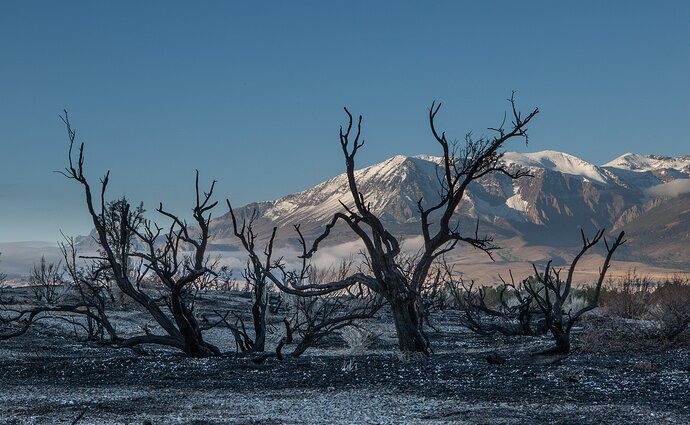 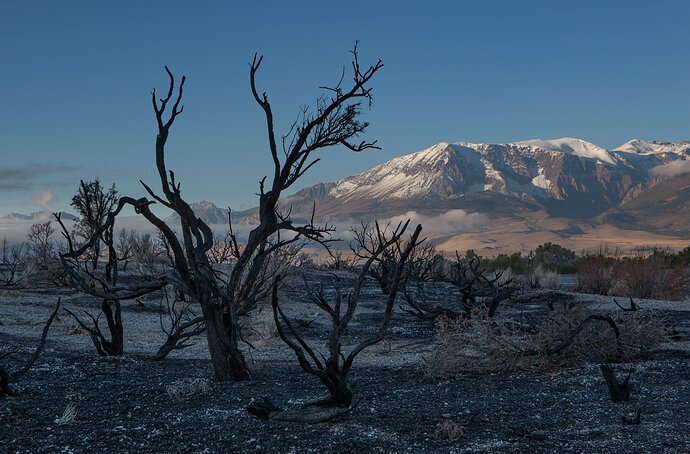 Thank you for posting these. I’m very drawn to the first one. I think I see the trees and then I move to that beautiful mountain in the background. It’s like seeing destruction and then being relieved by the beauty beyond that . The 2nd one is nice too. In that one the trees aren’t the main attraction for me,. It’s the lighting on that snow covered mountain. I was born in Albuquerque and lived there till we moved when I was 16. To this day I miss the landscape out west. The Ithaca area is very beautiful too, but they’re complete opposites. I’m happy that even sleep deprived, you managed to get these shoots. They remind me of where I grew up.

Wow, Donna. While I like the original post with the flames I find that I really like the post down below, image 3711. Beautifully balanced with that tree taking up some dead space on the left side of the frame and also having it frame the mountains. Not to neglect your original post but I truly find the images without the flames to be more impactful emotionally for me. I understand that because of the weekly challenge, you decided to be creative and creative you were and it works for the challenge. However, sign me up for those non flame images, particularly 3711. Just beautiful.

Thanks, @Jim_Gavin, @Donna_Callais and @David_Haynes! I wasn’t enthusiastic about this image because of the dead light on the mountains. There had been some decent (but not spectacular) color an hour before, when I was down on the lake. I was going to post an example here, but decided it was interesting enough to do its own post:

[Sunrise from Mono Lake] This was an hour earlier the same morning (in October of 2010) as the fun post I did for the Fire challenge: Burning bushes I dug it out to drop in that thread to illustrate why I hadn’t been very enthusiastic about the bushes, although I’m very happy that several others found it worthy. The mountains were just in dead light by the time I found the burned bushes, on my way out. And the shoot here was disappointing due to wind spoiling the reflections. There were …

I meant to come by and comment on this. I’ve been here and shot almost the exact same scene(s). The burn was so extensive and I LOVE how you’ve combined the two photos. The idea comes across so well and the shapes are perfect for each other. Brava!