So I’m usually able to get out to the crane migration on the Platte river at least twice in March but this year it just didn’t work with my schedule. What a crazy year with the historical snow fall in eastern Nebraska and the epic river flooding that followed in mid-March, the normal migration seems compressed. While they estimated a record number of cranes on the Platte on March 23rd (659K) a mere five days later March 28 the estimated count was down to 326K. I was able to get out to the Platte valley yesterday (4/6) for the first time this season and certainly noticed the reduced numbers. Also noticed the lack of waterfowl which I discussed with some folks in the area, they said they have yet to see normal numbers of migrating waterfowl through the area yet. Strange Spring to say the least. The back roads that I like to explore in the area are still a mess more then two weeks after the flooding conditions. I was fortunate to have some good light and some good crane dancing. 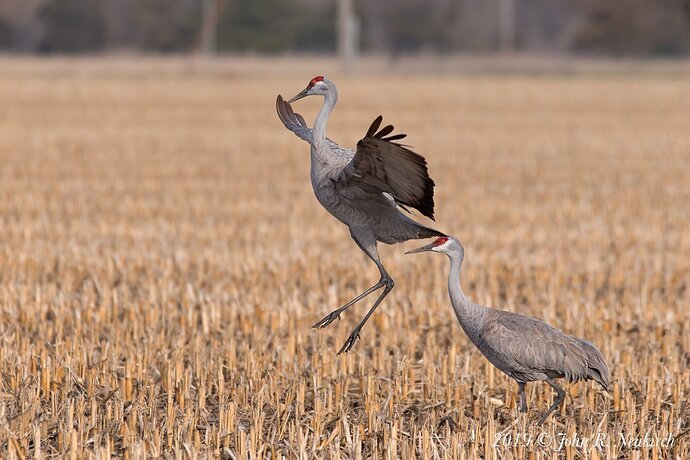 Very nice detail in both cranes, John. You caught a nice pose on the dancer and the foreground crane stands out nicely as well. If this were mine, I’d be tempted to replace the trees along the top wit an extension of the stubble, but I don’t know if it would look right.

Nice to see you posting again.

Nice catch, John - good positions from both cranes.
I’d be tempted to move the upper crane a bit away from the other crane, to separate them enough so they don’t touch. This would be easy to do with “Content-Aware” move tool.
Alternately, you could carefully brush over the very tip of the upper crane’s tail with a field-colored stroke to separate them.
I missed the cranes this year too, darn it.
Sandy

Nice image John with good suggestions already given above. Nice details on the cranes and good action captured.

A fun behavioral display. I agree that removing the trees at the top of the image would make this more contiguous. More and more I’m starting to believe that altering the main subject of the image to make them more artistic may not be appropriate. After all this is the photo you took.

Some really good suggestions, I appreciate it. I’ll play around with cloning out the trees by extending the stubble when I get a chance. Thanks again!