Subdued sunlight, light sleet, mountains and spindly birch trees barely visible above the drifted snow that looked as though they were etched in charcoal, provide a monochromatic palette (By the way this is not a black and white), that I find stunningly beautiful. Once again I don’t suppose they will thrill everybody but for me they are hugely evocative. 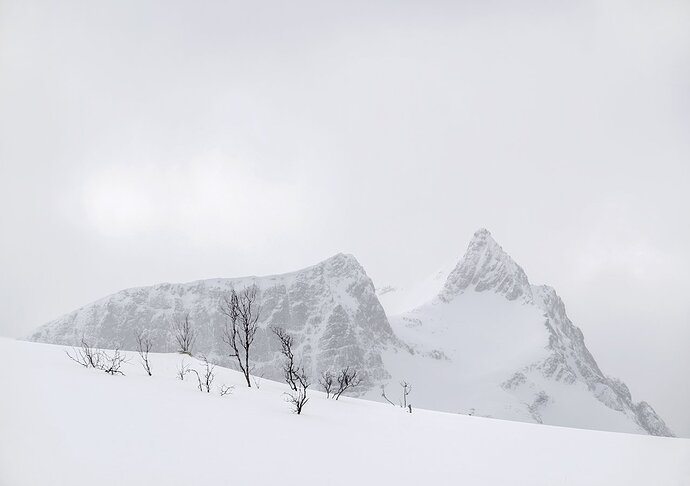 I like this one very much, Ian. This actually looks better on a white background than the dark. One thing I would do is very slightly, almost imperceptibly, darken the sky. I you do so to increase the tonal separation from the snow and to adds a touch more variability to the tonal value in the sky itself. There are slightly lighter portions in there which are attractive. 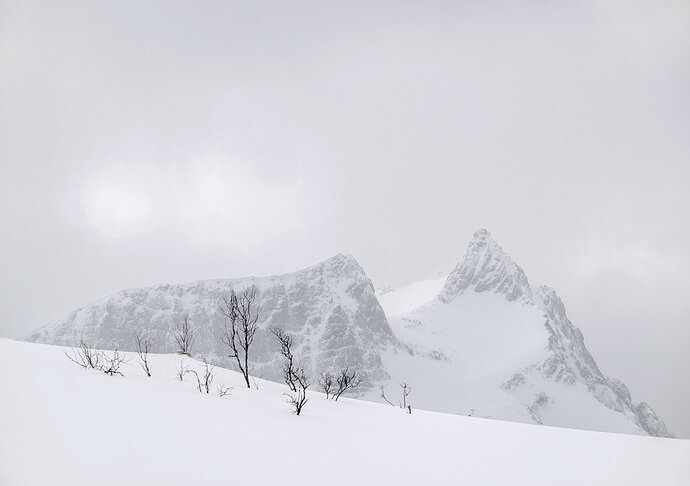 While not as mysterious or enchanting as your previous post - this one still has it’s own impression - and it’s a great one. I love how you composed and framed the starkness of the barren, forelorned trees within the rocky peak. Initially I was thinking of cropping some of the clouds because there’s a lot of space up there not adding anything really… but then again, this is NOT suited for a more narrow, pano crop; at least I don’t think so.

I think Igor’s subtle edit is excellent. A very slight change that I don’t think changes anything you might have seen or experience… but visually that very slight separation works. At least for me.

I much prefer this version to the last Ian. (That probably says more about me and my artistic sense than it does about the images

) I love the combination of subtle and dramatic that the background holds, and the branches make a nice contrast for the foreground. I also think you were dead on to include so much empty above; I think that emphasizes the lower part of the image. I too think Igor’s version is a good call.

I much prefer this one, as well. Beautifully stark and striking. It feels cold, too.

This is a really great shot Ian. Maybe the best you have posted for cc yet.

I like the composition and how you have taken care to make sure the trees are isolated against the mountain and don’t cross the ridge line. I agree with @Igor_Doncov about the sky. It juat adds something slightly ‘more’ to the sky.

My only cc, like the other photo of yours I commented on, would be to allow the mountain a little more room on the left and right side.

Oh this is a winner on my book, Ian. I like what Igor did to bring up some more tonal contrast to the sky but I also like it as presented. Very well seen.