I was out in the Mojave desert. Around sunset, I was sipping a tot of pre-dinner rye with the dog (she was not drinking) when suddenly really warm filtered-through-clouds light lit up some of the desert plants. I ran for the camera and tripod and set up quickly. This cholla took on quite a glow. I went with that glow in this B&W rendition. 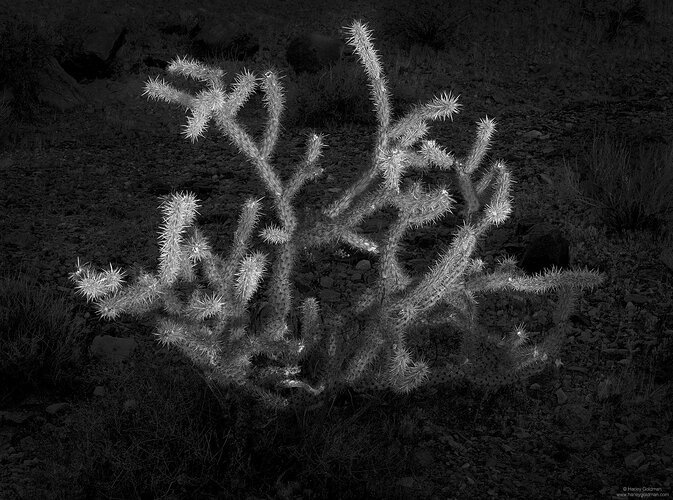 The old camera dash! Love it. (which rye, btw? I’m a bourbon girl, but mostly the non-wheated varieties).

I can see why you made the run. The light is truly lovely against the dark rocks and other plants. It doesn’t reach all parts of the subject, but that’s intriguing. How much darkening of the bg did you have to do? Just curious. It’s a crazy plant, but presented this way, it’s easier to take in.

Harley, those darn cholla can be neat subjects either standalone as you’ve captured here or in a scene as a supporting character with a different main subject. At first I thought this skinny guy was a pencil cholla, but closer look it is another flavor. As many as I’ve seen in the field I’m not sure I’ve seen all the types.
The worst are the teddy bear or jumping cholla. I’ve been nailed by those barbed devils a few times. I wear snake guards more for those than anything to do with the snakes.
I really like the light here and your B&W presentation too. Very nice indeed…

@Kris_Smith and @Paul_Breitkreuz , thanks for the comments. Kristen, I was sipping Rittenhouse. That and Bulleit are my usual go-to’s when indulging in rye. I used to be a single malt guy but in the last 3 or 4 years, I have developed a real liking for American ryes. BTW, the background started off a lot darker than the fore, but I took it a lot darker from there.

Amazing light Harley. That Cholla seems to be catching all the light. Love the black and white presentation for sure. I agree with @Paul_Breitkreuz about the Teddy Bear AKA jumping Cholla. Those things are really neat looking but I’ve been attacked to many times to count by those little devils. Particularly at the Joshua Tree cholla garden where there are millions of them in close quarters. They even have a box with a pair of pliers there for the unsuspecting visitors that get nabbed. Great Image though Harley!

@David_Haynes , I had an event at that same location several years ago now myself. I had a cholla ball stuck to my hand and it was freezing outside too. Add in the fact I was fighting blood clots and was on blood thinners back then. I actually used the opening in my off road wheel on my truck to “scrape” the darn thing off my hand. I still had one or two barbed spines in one finger that took time to dislodge. I thought I’d bleed out before I got the holes plugged up. I learned a hard lesson that I’ve never repeated since…LOL…

I am smiling as I read this @Paul_Breitkreuz . Not from your discomfort and or pain but the fact that I have been there too. Little did I know the first time I got stuck I reached over with my bare hand to grab the ball that embedded itself into my arm and proceeded to get portions of the ball stuck in my hand. It was then that someone told me not to touch them and that there was a pair of pliers at the parking lot for all of the people who get these stuck in their skin. I can look back on that and have a good chuckle now.

That light has given the cholla an otherworldly look and a life of its own, Harley. They sound like pretty nasty cacti!

Masterful job on the processing here Harley, you just nailed the luminosity of the glow. It’s the glow on the spikes that just grabs my attention. If you don’t mind a processing question, how did you get the tonality of the background (ie everything but the cholla) so uniform looking while maintaining some detail? The way the entire non-cactus part of the image looks works really well.

I used a combo of things. A Darks-2 TK mask on one layer, a gradient mask with a curves layer on another. There was already significant separation between the cholla and background, so the masking was doable without too much finessing.